Will the rate cuts have a positive impact on the sluggish performance of the hardware division of Metcash Limited (ASX: MTS)? The implementation of the rate cut would explain this with time.

The hardware pillar of the company had a major customer loss in the Queensland region and a slowdown in trade sales with lower sales in ~ first two months of FY20 than PCP. Moreover, impact of the present changes in the economic conditions (related to the residential housing sector, construction and DIY activities) on the pillar cannot be predicted at the moment. Though, the company believes that there has been some improvement in the network post the federal elections.

A market leader in the wholesale distribution and marketing industry, Metcash Limited has three main pillars- food, liquor and hardware. The company was founded in 1920 and was officially listed on ASX in 2005. MTS has its registered office in New South Wales.

The corporate EBIT was recorded at a negative $5.1 million, though it was $6.7 million in FY18.

During the reported period, MTSâ underlying PAT registered a decline of 3 per cent and was recorded at $210.3 million. Its statutory PAT amounted to $192.8 million in FY19, compared to a loss of almost $148.2 million in the same period a year ago. The underlying EPS grew 1.8 per cent to 22.6 cents in FY19. 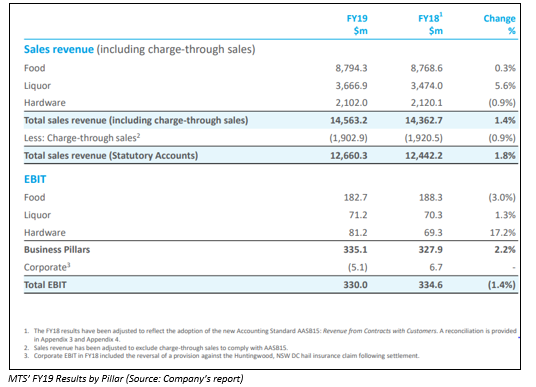 Let us have an overview of the performance of each segment:

Food: The total sales for supermarkets were down 0.5 per cent, reaching $7.2 billion in FY19. The wholesale sales dropped by 1.5 per cent in the financial year 2019, including a 1.3 per cent decline in 2H19, demonstrating a fourth consecutive half-year period of improvement in the decline rate. On the convenience front, total sales grew 4.4 per cent to $1.6 billion in FY19, driven by new customers, growth from main customers and increased sales of tobacco.

Liquor: The total sales for the segment registered an increase of 5.6 per cent to $3.7 billion in FY19, while wholesale sales to IBA bannered network grew 5.3 per cent. The companyâs IBA retailer network strength was demonstrated, as IBA bannered network reported six years of continuous LfL sales growth.

Hardware: This pillar generated substandard results for the company on the sales front with the total sales down by 0.9 per cent, impacted by the slowdown in construction activity and loss of customers in Queensland in the first half. The online sales, however, grew and trade sales were up (approximately 65 per cent of total sales). 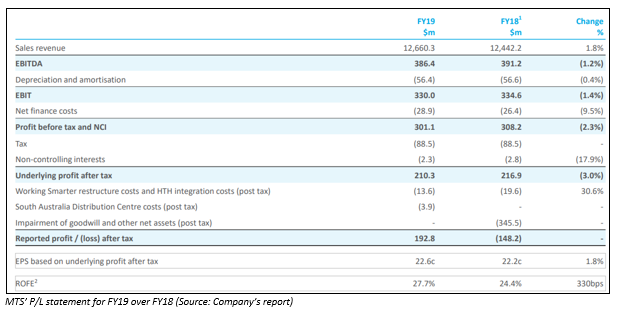 Other Updates and Dividend Update:

The FY19 final dividend stood at 7 cents per share, fully franked with the payment date of 7 August 2019. For FY19, the companyâs total dividends stand at $0.135 per share. The dividend payout ratio is approximately 60 per cent of the underlying earnings per share.

With the completion of its 3-year Working Smarter program, the company recorded a cumulative saving of ~$125 million.

MTS Outlook: The companyâs next five-year vision, named MFuture, is now underway, under which it has several key growth initiatives, like small format convenience store trial and DSA program acceleration under food pillar, national rollout of Porters Liquor and corporate store trial under liquor pillar, and expansion of company-owned stores under hardware pillar.

Under the food pillar, MTS and Drakes Supermarkets have reached a deal, which covers supplying its stores in Queensland for a 5-year period. The company is most likely to cease supplying Drakes Supermarkets in South Australia after the new DC becomes operational in September. Through the MFuture program, supermarkets would invest in growth initiatives and the cost savings via the program would aid in offsetting the impact of inflation on this pillar.

On the Liquor side, the premiumisation consumption is likely to drive the market in FY20. The focus would also be on the MFuture initiatives to enhance the IBA network.

The company expects additional cost savings to overcome any probable slowdown in the construction activity in FY20.

Changes in the Board: Besides the full year results for 2019, Metcash also notified about a couple of changes in the companyâs Board. Anne Brennan would step down from her role of Non-Executive Director in August 2019 post the companyâs Annual General Meeting for 2019.

Meanwhile, Fiona Balfour would not be contending for re-election at the Annual General Meeting and would retire post the conclusion of the meeting, after serving for almost 9 years as one of MTSâ non-executive directors.

Helen Nash would replace Fiona and assume the role of the Chair for the companyâs People and Culture Committee, while the Board hunts for the other probable and appropriate replacements as non-executive directors.

Earlier this year in February, it was announced that ASX- Listed eCargo Holdings acquired 85 per cent of MTSâ Metcash Export Services Pty Limited, which includes foreign subsidiary in China. ECG is basically a technology, eCommerce and specialist execution group of companies.

The consideration paid for the acquisition amounted to A$2.5 million and 85 per cent of the NAV of the business worth ~A$6 million along with a deferred payment of ~ A$3.5 million.

Post this activity, ECG would tap the growing consumer market in China by having a one-stop offering for businesses to take leverage of the Chinese markets.

MTS is a wholesaler and distributor to a number of retail chains and supermarkets in China. The company functions through cross-border eCommerce stores via key platforms like Alibabaâs Tmall Global and JD Worldwide.