Half Yearly Bells Ring for Beach Energy and Northern Star

The oil market and precious metals are maintaining their inverse relationship with crude oil prices tumbling down across the international market amid oversupplied conditions and weak demand, while on the other hand, gold prices are surging due to increased global uncertainty and strong demand from central banks and gold-backed ETFs.

Also Read: Crude Oil Under Supply Glut; A Speculative Ray of Hope for The Oil Market

Headquartered in Adelaide-BPT is an ASX-listed oil & natural gas exploration and production company with both onshore and offshore production in five basins across Australia and New Zealand.

BPT announced the half-yearly results for the financial year 2020 today and reported an underlying net profit after tax (or NPAT) of $274 million.

The Company managed to drill 105 wells in the first half of the financial year 2020 under the growth program with a success rate of 83 per cent., and the oil production at the Western Flank, for which the Company is undertaking further infrastructure expansion to support the high oil production, crossed 22,000 barrels of oil per day.

The drilling program at the Victorian Otway prospect now commenced with Black Watch-1, which is expected by BPT to reach depth in early March 2020, and the Ocean Onyx rig scheduled to arrive in March, which would further start the 9 well offshore drilling program with the Artisan-1 exploration well.

During the first half, the Beharra Springs Deep-1 well made a material gas discovery at the Perth Basin, and the Company further tested the flow, which stood at 46 million standard cubic feet per day.

The Dombey-1 discovered gas at the SA Otway Basin, while the appraisal work conducted by BPT in the Bauer Field further confirmed another field extension.

At the Cooper Basin, BPT continued to explore and appraise the Western Flank with a success rate of 66 per cent and further plans to support facility upgrades at Port Bonython to deliver improved capacity.

The underlying EBITDA for the period stood at $622 million, while underlying NPAT remained 9 per cent up against the Pro Forma H1 FY19 underlying NPAT. The Company reported net cash of $60 million at the end of the period (as on 31 December 2019). BPT also declared an interim dividend of 1.0 cents a share.

As per the Company, the completion of H1 FY20 has reduced the uncertainty around the production outlook for FY20, and apart from that, the narrowed guidance is also in line with the Company’s expectation of low demand ahead.

The gas demand, which remained strong in FY19, fell slightly during the first half of FY20; however, BPT is further ensuring an average operated asset facility reliability above 98 per cent (H1 FY20).

The variation in prior and present production guidance is also due to anticipation concerning a tie-in of a well into the Otway plant, which was previously expected to tie-in during March quarter 2020, is now expected to complete in June quarter 2020.

While the estimation of the overall production is churned slightly, on the oil production front the Company expects to meet the previous target of 8.7-9.2 million barrels.

The other variations are in prior and present FY20 guidance are as below:

To Know About Industry Peers and Sector Performance, Do Read: S&P/ASX 200 Energy- A Decade of Strong Performance; BPT and SXY Reports Quarterly Performance

NST is an ASX-listed global scale gold miner and explorer with Tier-1 gold prospects across North America and Australia.

NST reported its half-year (ended 31 December 2019) results and reported a surge of 54 per cent in net profit against the previous corresponding period.

The Company posted some strong financials for the period against the previous corresponding period and is moving towards its all-time high price of $14.050 (intraday high on 24 July 2019) with an intraday high of $13.940 today on ASX.

The Company mainly sourced the ore from Jundee, Kalgoorlie Operations, and Pogo during the period and mined 3,583,880 tonnes of ore. The average grade utilised by the Company (for all three gold prospects) stood at 4.5g/t with an average recovery of 90 per cent.

The gold production during the period reached 400,746 ounces, and the Company managed to sell 398,640 ounces, which along with an average realised price of $2,046 per ounce contributed to the total revenue of $8.26 million.

The cost of sales for the period stood at $6.15 million with an all-in sustaining cost for $1,454 per ounce.

The revenue for the reporting period soared by 31 per cent, while the EBITDA surged by 45 per cent, which further underpinned a 54 per cent increase in net profit. The snippet of the financial performance is as below: 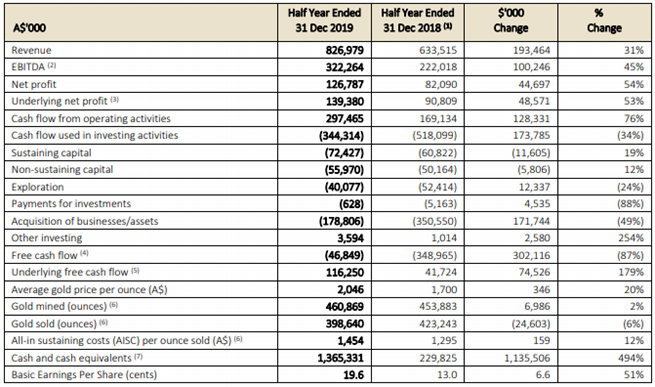 The 10 per cent increase in sales also supported the revenue; however, the increased cost of sales, rose by 28 per cent against pcp, with higher costs experienced at Kalgoorlie operations.

The operating cash flow for the period increased by $128.3 million to stand at $297.5 million, which remained ~75.94 per cent up against pcp, which marked a cash flow from operations of $169.1 million.

The total asset surged 82 per cent against pcp to stand at $3.1 billion with a $500 million drawn down to fund a part of the $800 million acquisition of 50 per cent of KCGM.

NST also completed the takeover of Echo Resources Limited during the half-year ended 31 December 2019, which further contributed $246 million in assets, and exploration and evaluation.

The total liabilities also surged by $607 million to stand at $1.1 billion amid the drawdown and change in accounting for leases from 1 July 2019; the Company has recognised as at 31 December 2019, $56 million of lease liabilities.