Gold prices are ablaze over the speculation of a possible rate cut from the Federal Reserve of the United States. The market expectation is dragging the dollar prices down in the international market, which, in turn, is supporting gold.

A high gold price in the market is supportive for gold miners as it supports the balance sheet in terms of high sales proceed, with gold prices inching up in the market. Let us have a look over few ASX-listed gold miners, who recently progressed over their prospects.

SLR announced on 18th June 2019, that the company received thick high-grade intersections from Aldiss Mining Centre, which is near the SAT Trend, where all the gold occurrences are within a granted Mining Lease.

SLR previously encountered the gold occurrences at three gold deposit over the SAT Trend, which includes, Spice, Atriedes, and Tank deposit. The company further conducted a detailed ground magnetic survey in the first quarter of the year 2019. 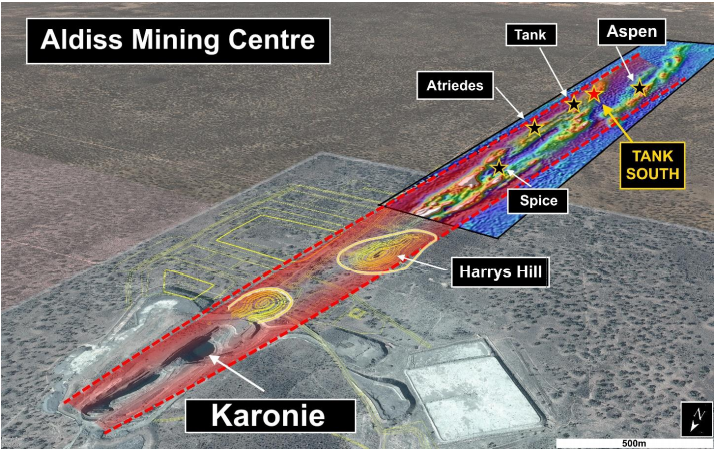 The survey improved the geophysical resolution and exploration target over the SAT Trend, and the company completed a preliminary phase of reverse circulation drilling over it in September 2018.

Post completing the preliminary phase, SLR completed a follow-up RC and diamond drilling phase in December 2018, which targeted direct extensions to mineralisation at the SAT Trend deposits. The follow-up phase intersected the widest and highest grade, along the south of the Harrys Hill as compared to the previous intersections received by the company.

The drill hole identified as 18STRC017D intersected 24.0m @ 9.39g/t of gold and 12.0m @ 3.25g/t of gold. However, the company identified that the plunge direction of the intersection is different from the existing Mineral Resources at Tank and hosts different style of mineralisation, which in turn, further indicates that the discovery is potentially a part of a new mineralised system, situated near to the existing shallow Tank deposit. 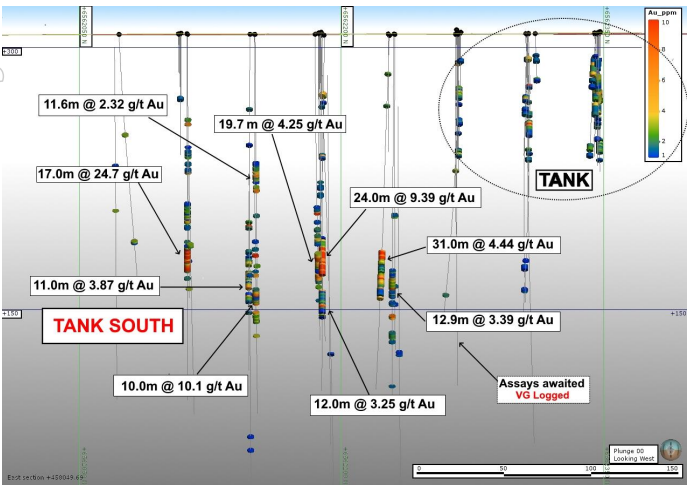 SLR further tested this new mineralised system through a follow-up RC and DD, which included a scissor hole at Tank South, which further confirmed the local extensions over 160m strike around the original intersections in 18STRC017D.

The results of the follow-up and initial drilling are as follows: 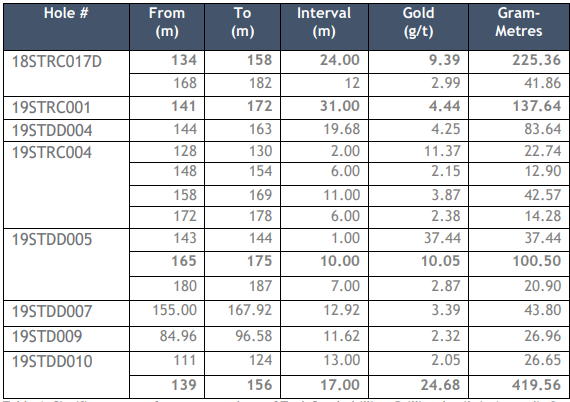 The drill hole identified as 19STDD010 intersected 17.00m @ 24.68g/t of gold, which was more significant than the previous widest and highest-grade intersection.

Apart from such intersections, the company tested continuity and extensions of lodes in the Upper Easter Hollows area at the Daisy Complex and discovered further Daisy Style mineralisation. The results gave grade ranging from 108g/t to 8.79g/t over different lengths.

The first-half year (1HFY19) revenue of the company inched up by 4 percent, and the company recently updated its quarterly activities as well.

The company reported a total of 28 RC drill holes which accounted for 5,600m drilling at the Rebecca corridor area. The ongoing drilling program aims to extend and boost the confidence in the company’s prospects namely Jennifer Lode & NE, Laura Lodes. Apart from the extension, the drilling also aims to explore for parallel lodes and strike extensions.

AOP identified new mineralisation to the south of Jennifer, which resulted in a grade of 16.92g/t of gold from 93m with a 2m continuity, which also included a grade of 27.80g/t with a 1m continuity. The drill hole which intersected the grades was identified as RCLR0354 and was on the southernmost line of the drilling, which was around 700m to the south of the Jennifer Lode. The new intersection was supported by the widespread anomalism in the same hole and by a further gold zone of 0.91g/t grade, identified by RCLR0358 on the next exploration traverse 100m to the north.

The new identification extended the Rebecca gold system by more than 1.4km, and as per the company, the trend is open in the southward direction. AOP discovered a new gold zone at the Lake Rebecca prospect previously as well.

Apollo also conducted exploration drilling at the Laura and Jennifer NE, and the results of the activity are as: 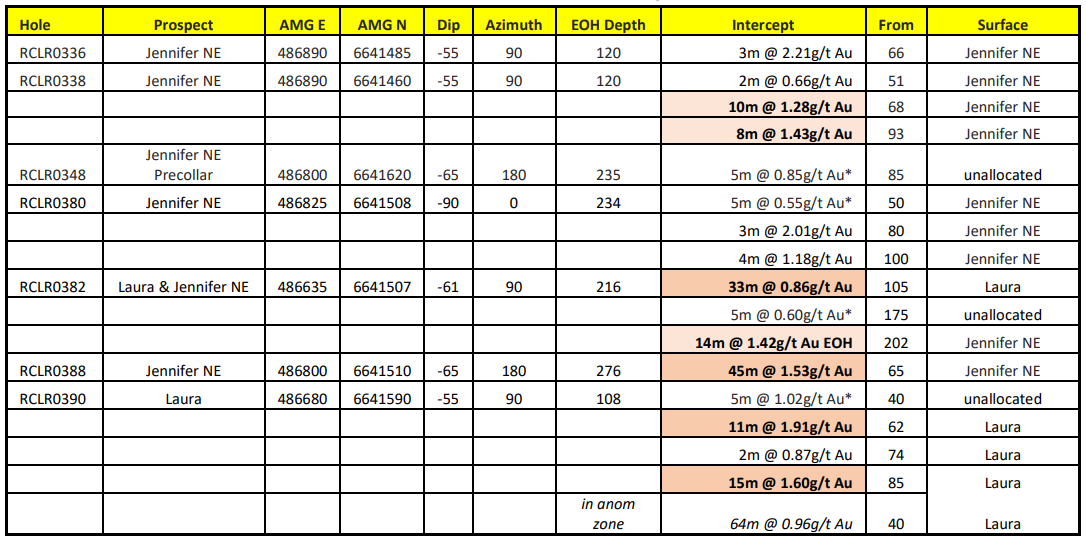 The significant results from the extension holes of the Jennifer Lode and Jennifer Hangingwall Surfaces are as:

As per the company, the results indicate that the Jennifer Lode is picking up strength and width at depth to the north.

KZR announced on 18th June 2019, that the company secured the services of Planetary Geophysics to complete the Induced Polarisation and ground magnetic surveys over the Castlemaine Gold Project in Victoria, Australia.  The company plans to conduct these surveys over the top ten prospects located within the Exploration Licence EL006679 at the gold project.

The proposed survey would include about 40-line km of Induced Polarisation survey lines and 360-line km of ground magnetic survey lines spread across the top-ranked prospects, with an aim to identify the potential gold mineralised fault/ fold structures for follow-up DD test planned for late 2019.

As per the company, no geophysical surveys have been conducted on the Castlemaine since the 1960s, and the data available for the area is of aeromagnetic and ground gravity surveys.

The company’s exploration strategy includes the application of modern ground geophysical survey over the high ranking prospects at the Castlemaine Gold Project, and as per the company, the absence of young sedimentary cover is a positive feature which would help the geophysical survey to identify the geological features at greater depths better.

KZR acquired the project in June 2018 which included the entire Castlemaine Goldfield and historic Wattle Gully gold mine along with the 288km2 surrounding. The gold project of the company is one of the most productive gold fields in Australia and produced 5.6 million ounces of gold across its life. As per the company, the drilling at the project is limited below 400m, and only minor exploration activities have been conducted over the past decade.

Kalamazoo also provided its Cork Tree Project resampling results, for which the company collected the samples from two RC holes at the Cork Tree prospect in order to test for copper anomalous intervals identified by the RC holes.

The Results of the resampling are as:

Classic Minerals signed the agreement for the development of its Fraser Range tenements, and Classic mentioned, that it had received significant funds for the highly regarded exploration work for the advancement of the project.

As per the agreement, IGO would continue to advance the Fraser Range Project, which in turn, would allow Classic Minerals to focus on the exploration of its emerging Kat Gap Gold Project in the Forrestania area.

However, the completion of the agreement remains subjective to the Ministerial approval over the transfer of tenure within the first year of the grant.