On December 17, 2018, Genetic Signatures Limited announced that it had received CE-IVD registration which will permit the sales of its EasyScreen Respiratory Pathogen Detection Kit in Europe.

Genetic Signatures Limited (ASX: GSS) is in Pharmaceuticals, Biotechnology, and Life Sciences industry. The company mainly operates as a molecular diagnostic company. Dr. Geoffrey Grigg was the founder of the company, and the company got listed in 2015.

The EasyScreen Respiratory Pathogen Detection Kit helps in improving diagnostic times, fast-tracking treatment and thereby saving lives. It helps to identify 14 common respiratory pathogens, including influenza A & B, Rhinovirus and M. pneumoniae. The Kit allows rapid detection of pathogens in up to 94 specimens per batch in approximately 4.5 hours for laboratory technicians.

The Kit can be adopted in most testing laboratories with existing equipment, and this feature had made a broad market appeal. This is the third EasyScreen product which receives the CE Mark, and the company had previously received approvals for its Enteric range which includes Protozoan, Viral, and Bacterial targets as well as ESBL & CPO Antibiotic resistant Superbug Detection Kit.

The company has also been progressing market entry of the EasyScreen Respiratory Pathogen Detection Kit in Australia. Previously, the company has announced that they had secured a major new domestic customer for the respiratory kit. The Therapeutic Goods Administration (TGA) registration is expected in the coming months.

As stated by Genetic Signatures CEO Dr. John Melki, the registration of their Respiratory Kit will be an important achievement within their European commercialization efforts. The company’s Regulatory and Product Development teams have proven track record of taking the product through the regulatory process with three product ranges achieving full CE-IVD registration in the last 18 months. Their expanding European team now has a suite of products to advance sales in 2019 and beyond. 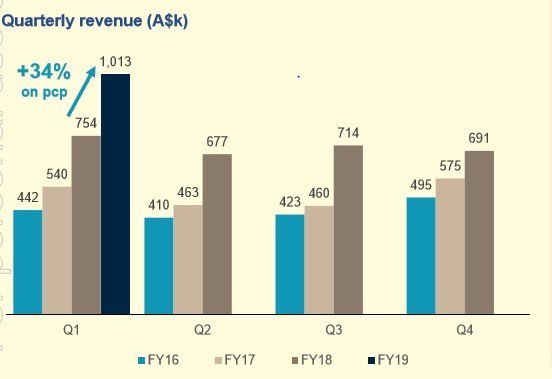 Quarterly Results: The company quarterly revenue for the quarter ending 30th September 2018, exceeds A$1.0 million for the first time, which is a significant milestone for Genetic Signatures. There is a strong sales traction across the portfolio, where record revenue achieved despite a relatively soft flu season. The company has a strong balance sheet with cash of A$7.4 million and no debt as on 30 September 2018.

Yearly Performance: The company generated revenue of $2.84 Million in 2018, representing an upside of 39% on the same period last year. Net loss for the year to date is -$ 3.28 million, an increase of 22% over the $2.7 million recorded in the corresponding period in 2017.

Stock performance: In the last six months, the share price of the Genetic Signatures Limited has shown an excellent positive return of 110 percent as on 17 December 2018 and 50 percent up over the past one month.  The shares are currently trading at around $0.815 with a market capitalization of $87.38 million as on 18 December 2018.