As per a report released by the Department of Industry, Innovation and Science, Australia’s ongoing economic success depends on its ability to harness technological advances to create new products and markets, improve existing businesses, and enhance daily life. The market experts believe that the digital technologies will provide advantages across the society and economy in future. The opportunities afforded by digital technologies in Australia are not constrained to tech-based firms and start-ups; however, they can add value across all parts of the economy.

Technology is filling the gap across various sectors of the Australian economy, such as:

Besides these sectors, there are several other sectors where the impact of technological innovation is evident. Considering this, let us discuss some ASX-listed companies engaged in technology sector along with their recent updates below:

The company notified that despite very best efforts, its vendor was unable to meet delivery schedules that were expected before the High Holiday’s vacation season in Israel. The company recently mentioned in its half-year report for six months ended 30 June 2019, that specific fabrication steps of the MEMS wafers have been altered to lessen critical performance requirements on vendor fabrication tolerances.

As per Audio Pixels, most of the necessary modifications have already been executed and that the test wafers are close to completion. The delivery of the test wafers is likely to begin shortly after the vacation season by the end of October.

Take a look at the company’s recently released financial figures below:

On 10th October 2019, the company notified about the launch of its immersive VR design platform across European markets, FrameS in November 2019. The launch of FrameS is the company’s first step towards its strategy to build a global SaaS business model.

The company mentioned that the launch is underpinned by distribution partnerships with Four Bytes, Altea Federation and Infor, targeting more than 6,700 clients including Maserati, Agusta Westland, Ferrari, Duracell and Gucci.

The high-tech company headquartered in Israel, Mobilicom Limited (ASX: MOB) develops, designs and delivers communication solutions for vital and remote mobile private networks that can operate without the need for existing infrastructure. The company’s products and technologies are based on an innovative methodology that merges Mobile MESH and 4G technologies. The company has two business entities, with one addressing communication in the Government and Enterprise sector and other targeting the Commercial Drone & Robotics sector (SkyHopper business entity).

The company notified via an ASX update that its Commercial Drone Upgrade Solution has surpassed its target of $1 million in orders in 2019, post a fresh repeat order in excess of $200,000. The company informed about the receipt of a repeat order from various units within Israel MOD, including Army and Navy.

In August this year, the company received and delivered on a purchase order surpassing $250,000 from Bird AeroSystems, a major supplier of airborne surveillance solutions.

Take a look at the company’s recently published financial figures for the half-year ended 30 June 2019 below: 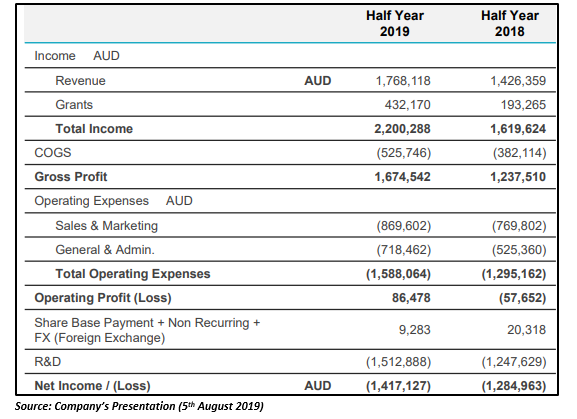 Mogul has recently informed about the partnership with SG Esports, which is an esports organisation with streamers, teams and community groups. SG Esports is also the commercial partner of Summoners’ Society, which is a community group with over 11,000 members playing ‘League of Legends’ in Australia.

As per Mogul, partnership with SG Esport has validated its ability to attract talent managers, community groups, tournament organisers and other esports organisations that focus on esports teams to expand its member base.