As per the series of announcements made public on 03 June 2019, Gascoyne Resources’ stock has been suspended from quotation following the appointment of voluntary administrators. This follows the recent trading halt placed at the company’s request due to pending market announcement.

The appointment of administrators comes as a part of company’s focus on advancing mining operations at its wholly owned Dalgaranga Gold Project in order to increase ore releases and lift grades available for processing. So, the appointment broadly addresses the issues the company has been experiencing with reconciliation to Ore Reserves, which led to Mineral Resource models materially below expectations impacting the level of gold ounces GCY has been able to produce.

It has been observed that these issues remain unresolved despite the extensive efforts by GCY to optimise operations by targeting improved mined grade, resource reconciliation, and increased material movements. 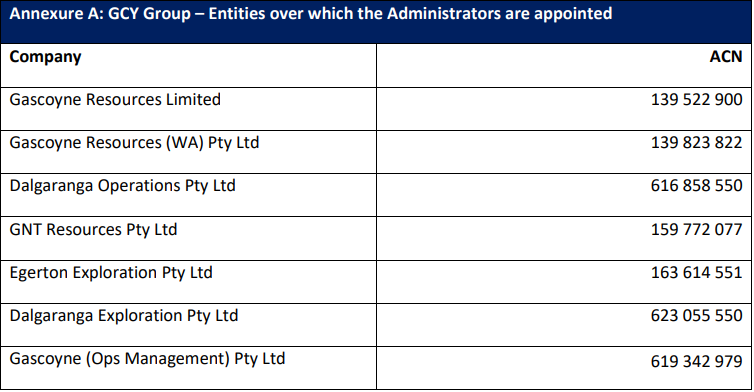 Meanwhile, resource consultants of GCY produced a new preliminary unclassified Localised Uniform Conditioning (LUC) resource model for the Gilbeys deposit and recommended it to the Board as the preferred model. Based on the new resource model, GCY eyes a material cash flow shortage in the short term, particularly in next 6 months, due to lower predicted grades in the new model as indicated in the high-level cash flow analysis. GCY investigated feasible options to address this cash flow shortfall but it finally concluded that those options would not be able to successfully address the cash flow shortfall within the available timeframe.

As a result, Gascoyne Resources arrived at the decision to appoint voluntary administrator for the company. It further reported that while FTI Consulting administers the company, shares of GCY would remain suspended from trading and updates would be uploaded on ASX.

It is reported that the consultants would administer GCY on a ‘business as usual’ basis while exploring the options for recapitalisation. Voluntary Administrators asserted that the first statutory meeting of creditors is expected to take place on 13 June 2019 and details would be distributed to concerned parties timely.

GCY also released resignation statement on ASX today, which read that some directors and statutory officers of the company and its subsidiaries have resigned on 31 May 2019. It included Non-Executive Chair Sally-Anne Layma, Non-Executive Director Mark Le Messurie, Chief Financial Officer Mike Ball and Chief Executive Officer Richard Hay. In addition to this, the company expects to provide further advice on Board composition in due course.