Galan Lithium Limited (ASX: GLN), based in West Perth, Australia, is a metals and mining sector player engaged in the exploration and investigation of lithium brines at one of the world’s Tier 1 location, Salar De Hombre Muerto located in South America’s highly proliferous Lithium Triangle.

There are 13 granted exploration tenements in Salar De Hombre Muerto, representing six project areas and covering around 25,000 ha, where Galan Lithium holds 100% interest. Of the total area of the tenements, at least 7,800 ha was rated as prospective for brines, including a significant 6,000 ha under the Candelas Lithium Brine project, which includes a structurally controlled Los Patos channel (15 km by 3-5 km), along the eastern side of the Salar.

Galan Lithium has been actively advancing exploration activities and recently completed a drilling campaign at the Candelas Project in July 2019 while permits to commence the maiden drilling programme at the Western Basin Projects in Hombre Muerto have been received lately (as announced on 24 July 2019) from the Secretaria de Estado de Minería - Gobierno de Catamarca (the authority that approves drilling permits in Catamarca, Argentina). 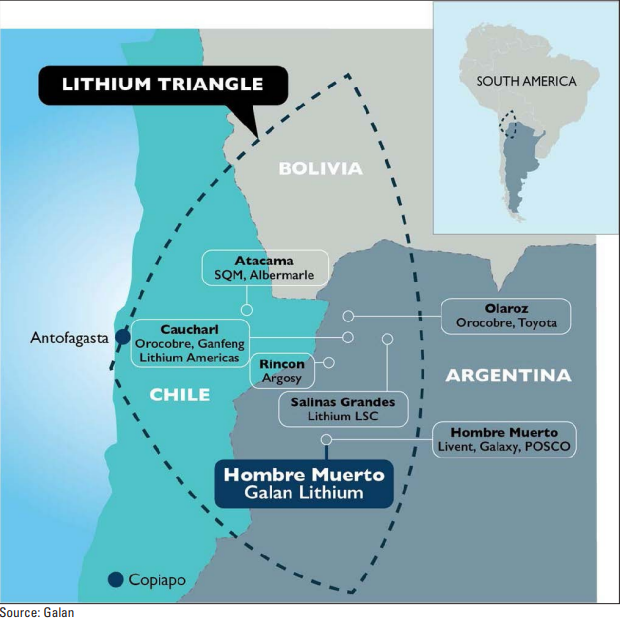 Capital Raising Update: Recently on 5 August 2019, Galan Lithium announced to the market that it was undertaking a capital raising of $ 2 million through a combination of a Private Placement to sophisticated investors and a Share Purchase Plan offer to existing shareholders.

Private Placement - The company confirmed that it had received firm commitments from sophisticated investors to raise ~$ 1 million through a placement of 5,555,555 shares at 18 cents each with one free unquoted option (exercisable on or before 31 August 2020 at $ 0.25 each) also being issued on a one option for every two shares subscribed for basis (Placement). The Placement shares and around 2,777,777 options would be issued under the company’s existing placement capacity under ASX Listing Rule 7.1.

Share Purchase Plan - The company is also offering the existing eligible shareholders, shares issued at the same price of 18 cents each along with one free unquoted option (exercisable on or before 31 August 2020 at $ 0.25 each) and on the same terms as the Placement under a Share Purchase Plan to raise up to an additional $ 1 million.

Under the Plan, Eligible Shareholders would be able to purchase up to $ 15,000 worth of shares, regardless of the size of their shareholding in the company, without incurring transaction costs or brokerage fee. Further, the directors of the company who are eligible shareholders intend to participate under the plan.

The Plan would not be underwritten, and the Indicative Timetable for the same is given below.

The price of $ 0.18 per share, represents a discount of 1% to $ 0.1814 (volume weighted average market price (VWAP) for the shares over the last 5 days on which sales in the shares were recorded before the day on which the Plan was announced).

The Offer is being made based on first come first basis. The company may close the Offer early or extend the closing date of the Offer, as suitable.

The proceeds from the capital raising have been indicated to be directed towards continuing the ongoing work on a JORC compliant resource estimation and commencement of the Pre-Feasibility Study (PFS) for Candelas North, to support the initial drilling campaign for the Western Tenements and for working capital purposes.

Headways at Candelas Project - During the three months to 30 June 2019, Galan Lithium successfully completed stage one and two drilling programmes at the Candelas Lithium Brine Project following the latest results confirming the presence of high-grade minimally contaminated (with Mg/Li ratios <2.80) brines over at least a 3.5 km strike extent at the northern end of Candelas basin. No lost time injuries (LTIs) were recorded by the company since the initiation of drilling in January 2019.

Galan Lithium has also begun preparations for the commencement of the PFS into the potential development of the project. SRK (Australia) recently visited the project site as a part of its ongoing supervision of the project and to kick off the process of Mineral Resource Estimation. In addition, SRK (Australia) also paid a visit to the Western Tenements where site access works for drilling are being finalised.

The company is on track to define and deliver a resource estimate for Candelas by Q3 2019, that would be immediately followed by the commencement of the PFS.

The sample of the lithium brines have been forwarded to international laboratories for evaluation of lithium extraction using ion-exchange technologies and the results for the same are expected in the next few months. Galan Lithium is also considering a more conventional processing route for the same. The company is conducting discussions with the potential technology firms to provide ion exchange recovery from lithium brines.

Western Tenements: Next in Focus – Located on the periphery of the Hombre Muerto Basin between Catamarca and Salta provinces in Argentina, the Western Basin project areas comprise El Deceo, Santa Barbara, Catalina, Pata Pila and Rana del Sal. With permits in place, the maiden drilling campaign at these targets will mainly examine the highly conductive anomalies recorded during the first ever CSAMT (Controlled Source Audio-frequency Magnetotellurics) surveys completed earlier in late September 2018, when the company interpreted that there is the potential for 1,860 ha of brine coverage for the Western Projects.