Focus On Dividends- SLK And RFF

The ongoing earnings season in corporate world has its own significance as various companies have released their results for the full year. Hence, the details for the whole year come into visibility at one place for assessment by the investors. The annual report contains the detailed information of financials, project development and deals, if any, etc. Today, we are discussing two stocks - SeaLink Travel Group Limited and Rural Funds Group with an eye on dividends.

On operational front, the company integrated the Kingfisher Bay Resort Group and refurbishments were initiated. SLK commenced the Bruny Island ferry service in Tasmania along with the start of construction of two vessels intended for the purpose. During the period, the company divested two Capricornian Class vessels for which the net proceeds at $9.9 million was higher than book value.

The company recently, released its full year results for FY19, according to which, SLK recorded a statutory Net Profit after Tax (NPAT) of $21.5 million as compared to a NPAT of $19.6 million in FY18. Underlying NPAT stood at $23.4 million as compared to $22.1 million in the previous financial year, posting a growth of 5.9%. Underlying EBITDA at $47.9 million posted a growth of 3% against EBITDA of $46.5 million in FY18. FY19 underlying EBITDA did not include impairment of the investment in UWAI amounting to $1.6 million, business acquisition costs related to Fraser Island worth $0.2 million, and expenses valued at $0.2 million associated with the unsuccessful tender for Sydney Ferries. The company posted strong net operating cashflow of $40.7 million during the period which was up 42.8% year over year. Net debt on balance sheet also declined by $21.4 million or 20.3% year over year to $83.9 million. 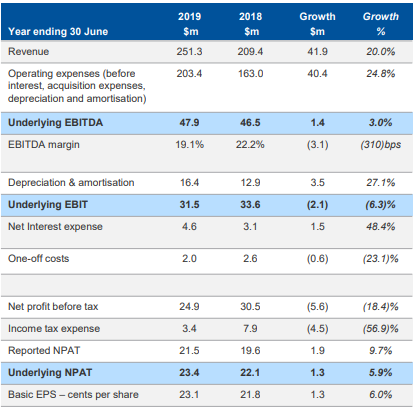 SeaLink South Australia: The division witnessed a fall of 6.6% in EBIT (before corporate allocations) to $16.9 million in FY19 as compared with $18.1 million in FY18. The decreased EBIT can be attributed to challenging year for the PS Murray Princess, with revenue down 9% from the record high achieved in FY18.

Captain Cook Cruises – New South Wales and Western Australia: With softer demand from international tourism, the division faced challenges during FY19. The division posted a fall of 3.3% in revenues to $53.4 million in FY19 from $55.2 million in FY18, with EBIT declining from a profit of $0.5 million in FY18 to a loss of $1.1 million in FY19. The lower sales and EBIT were mainly on account of lower chartering revenue from the Harbour City Ferries contract along with a sluggish business environment. Dining revenue witnessed a growth of 1.0% in FY19.

Fraser Island: The segment performed well with revenues growing at the rate of 3% on the corresponding period of prior year. The division contributed sales of $54.1 million and EBITDA of $8.0 million with EBITDA margin at 14.8%.

Going forward, with the assumption of average seasonal and current business conditions to remain stable along with fuel prices, the Management is well positioned to improve upon FY19 results. The Management expects underlying EBITDA (including the benefit of CCC initiatives) is likely to be in between $49.0 million to $52.0 million for financial year 2020.

The company recently released its full year financial results for FY19 wherein it mentioned that revenue from property witnessed a growth of 30% owing to JBS transactions, acquisitions, development capital expenditure, and lease indexation. Total comprehensive income (TCI) and Earnings per unit (EPU) were lower mainly on account of non-cash revaluation decrements on interest rate swaps amounting to $18 million. FY19 Adjusted funds from operations (AFFO) per unit came in at 13.3 cents, posting a growth of 4.7% on 12.7 cents in FY18, in-line with forecast. FY19 Distributions per unit (DPU) stood at 10.43 cents against 10.03 cents in FY18. AFFO payout ratio in FY19 at 78% was marginally lower than that of 79% in FY18.

During FY19, the company the Group negotiated a transaction related to the acquisition of JBS Australia Pty Limited’s five Australian feedlots and related cropping land for $52.7 million, including stamp duty and the provision of a $75.0 million guarantee to J&F Australia Pty Limited, for which the approval was received at the unitholder meeting held in the month of August 2018. Another development during FY19 was the purchase of Comanche, a 7,600 hectare (ha) cattle property. During FY19, the company completed an equity placement of $149.5 million to support the JBS transaction, associated costs, and the acquisition of Comanche. RFF purchased Dyamberin (a 1,728-ha cattle property), Woodburn (a 1,062 ha cattle property), Cobungra, a 6,486 ha cattle property, etc. during the year.

Coming to the balance sheet, adjusted total assets witnessed an increase of $222.2 million, mainly on account of the acquisitions, capital expenditure and revaluations of almond orchards, vineyards and water entitlement. Gearing ratio at the end of the period stood at 31% which is within the target range of 30% to 35%, with sufficient capacity to settle remaining acquisitions and committed capex.

Net asset value (NAV) per unit came in at $1.57 in FY19 against $1.48 in FY18. Adjusted NAV per unit witnessed a growth of 7%, mainly driven by independent revaluations of almond orchards, vineyards and water entitlement.