Stocks that trade at a market price below $ 1 are termed as penny stocks. In this article, we would discuss recent updates from five penny stocks operating in different sectors and listed on ASX.

Launch provider Rocket Lab has informed Kleos Space S.A. (ASX: KSS), a provider of space-powered radio frequency reconnaissance data, regarding the extension of the launch period of KSSâ Scouting Mission to October 2019, according to a KSS announcement to the market on 22 July 2019.

Factoring in Rocket Lab's needs along with evolving production schedule, the launch period has been extended beyond the period as mentioned in the contract, i.e. end of August 2019. Rocket Lab is taking every step necessary to launch the Kleos satellites as early as possible.

Chief Executive Officer of Rocket Lab, Peter Beck, stated that Rocket Lab is scaling production and launch operations in order to meet the increasing market demand. He also stated that the company would be launching Kleos satellites in the upcoming months.

Andy Bowyer, the CEO of KSS, believes that the launch of the satellite is extremely complex in nature, and there are often chances of delays. Thus, the companyâs team would be utilizing this period of delay by expanding the various client contracts secured, as well as continuing the development of its data products and progressing with the 2nd generation of satellites.

The focus of its planned 2nd mission will be on providing improved coverage of the Earth near to the equator, which would help in boosting its revenue along with its customer base. Further, it would also help in gaining advantage and maintaining its schedule on track for the overall growth of the business.

Figure below highlights the companyâs plan after the mission launch. 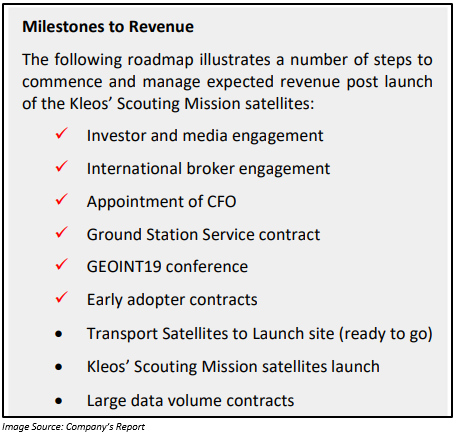 The Share Purchase Plan (SPP) of XTEK Limited (ASX: XTE) opened on 22 July 2019. The company, on 17 July 2019, had unveiled plans regarding an equity raising initiative. The SPP is in addition to the recently completed placement worth A$ 2.7 million

The record date for taking part in the SPP was 16 July 2019, with each eligible shareholder getting the opportunity to buy new ordinary shares of the company at an issue price of A$ 0.45 each share. Through this SPP, the company plans to raise A$ 1.0 million.

The issue of new shares would be under the same terms and conditions and will have equal rank with the existing shares of the company. XTE will issue a maximum number of 12,173,971 new shares under the SPP.

Further, the amount raised through the share purchase plan would be subject to the companyâs discretion for accepting oversubscriptions and to scale back applications.

The proceeds generated through this SPP and placement would help the company in funding the acquisition of HighCom Armor Solutions, Inc, commercial development and growth into the US, commercialisation of XTatlasTM and XTclaveTM, and other working capital requirements. HighCom Armor, which is based in Columbus, Ohio, is engaged in providing body armour along with private protective equipment.

Software as a Service provider, 9 Spokes International Limited (ASX: 9SP), on 22 July 2019, announced to have agreed to a variation to its Barclays contract, which eliminates the exclusivity provisions from the contract. The agreement between the company and Barclays was signed in November 2015, under which 9SP was supposed to provide white-labelled platform services to the small business clients of Barclays. Both the parties have agreed a variation to their current white-label platform contract. Under this variation, the two companies would not have an exclusive relationship, thus enabling 9SP to consider new opportunities in the UK banking industry.

The existing contract for white label platform services is scheduled for expiry in the month of December 2019. A separate contract would cover the ongoing discussions related to alternative services which would extend into 2020. Owing to the exclusivity provisions in the contract, the company was barred from progressing contracts with potential global clients, seeking services to their clients in the United Kingdom. There would be certain adjustments in terms of revenue in the existing contract as a result of the removal of the exclusivity clause, which would be applicable during the quarter ended December 2019.

Meanwhile, 9SP is in talks with other non-UK banking as well as financial institutions regarding the deployment of its white-label platform across the areas covered under their operations.

On 23 July 2019, ApplyDirect Limited (ASX: AD1) released an announcement related to a SPP offer, under which eligible shareholders can acquire ordinary shares worth A$ 15,000 at an issue price of A$ 0.015 per share. The minimum shares which the eligible shareholders can acquire would be worth A$ 1,000, while the maximum would be A$ 15,000. In a market announcement on 16 July 2019, the company had unveiled the SPP that is partially underwritten to $ 350,000 by Smedley Family Office, a cornerstone investor. 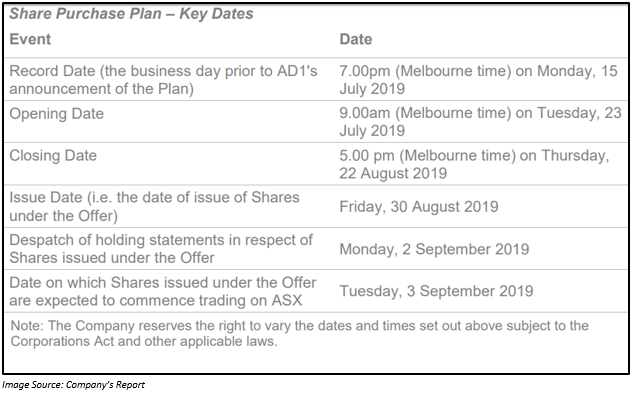 Moreover, the provider of online database and search platform for e-recruitment released its business update for the fourth quarter ended 30 June 2019 on 22 July 2019.

During the period, cash receipts from customers was up by 176% to ~ $1,147,000 as compared to its previous quarter. There was a decline of 38% year-on-year in net operating cash outflow to ~ $1,019,000 in the June quarter. The outflow also included one-off costs related to contracted annuity revenues that are expected to start in the first and the second quarter of FY2020.

The company also unveiled strong support from the cornerstone investor. Smedley Family Office will get entitled to a position in the companyâs board, as well as aid and actively drive its mergers & acquisitions activity. One of the important priorities of the company is to look for complementary earnings per share accretive targets for acquisition in order to boost growth.

The company achieved a cost run-rate reduction of ~ $ 3 million per annum. Moreover, it reported that Utility Software Services (USS) is progressing well, as a result of new participants in the utility sector. The company also signed a multi-year contract with the Pharmacy Guild of Australia for developing, hosting as well as maintaining a Guild branded talent platform which would help in connecting employers with the talent in the Australian pharmacy sector. According to the June quarter update, its Managed Services Agreement also got extended by the Victorian Government for a period of 12 months. New projects were also signed with the NSW government for the enhancement of iworkfornsw talent platform.

Digital media and advertising company, engage: BDR Limited (ASX: EN1), on 22 July 2019, announced the full integration of signed partnerships, which were pending successful integration earlier. The 12 new programmatic integrations, which are generating revenue and are live, in time for the demand expected in the third and fourth quarter are listed below: 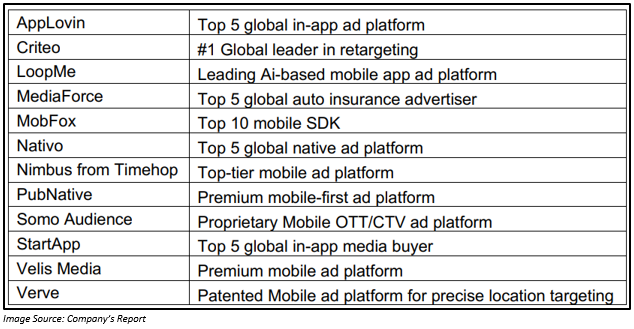 Most of the integrations mentioned above are in validation phases on lower volumes. The companyâs management anticipates boosting traffic on an incremental basis once counting inconsistencies at scale gets removed between the parties and the company as well as partners whitelist more of EN1âs inventory.