Experience Co Limited (ASX: EXP) belongs to the Consumer Discretionary sector and is engaged in online and real-life store where one can shop experiences from the adventure tourism leaders of the world all in one place.

On 16 May 2019, the company announced the trading update and revised FY19 guidance. In the half-yearly results, the company highlighted the softer trading conditions in Far North Queensland (FNQ). It has continued to impact the tourism market in the region. Market trends impacting tourism operators in the region was due to fall in the passenger volumes into Cairns airport as compared to the previous corresponding period. The number of passengers checking into Cairns airport declined compared to the previous year, with the YOY global volumes also being influenced by the lessening of the services in that area, by the international carriers like China Southern.

The domestic airlines had lessened their capacity into Cairns and kept on operating high load factors affecting relative affordability when compared to international destinations.

The company expects that the FY19’s total passenger numbers ex-Cairns to the Great Barrier Reef would be down by more than 12% as compared to the previous corresponding period (pcp). The Great Barrier reef volumes of the company are expected to decline around 8% over pcp.

As a result of these above factors, the company’s revenue was impacted in the region. The effect especially occurred on higher profitable activities on the Great Barrier Reef. Also, due to revenue loss, there was also a fall in the EBITDA margin.

The company expects that in its FNQ skydiving operation, the revised volume expectations will be down by 20% to ~ 4,000 tandem jumps for the second half of FY2019.

Based on the review of the company’s trading during Easter holidays in late April 2019, and early May 2019 along with the late season Cyclone Ann, the company has revised the FY2019 guidance. The late-season Cyclone Ann grounded the adventure experience and skydiving experiences temporarily.

Based on these above reasons, the company now expects its revenue for FY2019 to be down by ~4% as compared to its earlier expectations. The EBITDA (underlying) is anticipated to be in between $27million-$28 million.

On the other hand, the core skydiving business in Australia, which excludes FNQ and New Zealand was solid and is in line with the expectation for the remaining part of FY2019. The company expects that there will be full year growth in the tandem jump volumes by ~5% as compared to the previous period across these markets. 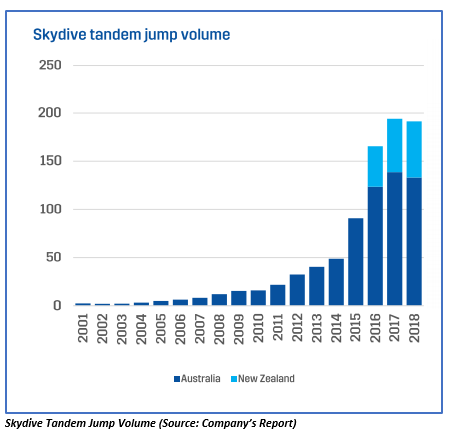 The company’s medium-term outlook for the Cairns tourism market is positive. However, the company believes that these challenging trading situations will continue into FY2020 as well.

In the 1H FY2019 period, the company noted an increase in the revenue from the ordinary activities by 42.3% to $84.309 million as compared to the previous corresponding period. The company made a net profit of $7.383million, up by 59.1% on pcp.

The balance sheet of the company reported a slight increase in the net asset base as a result of growth in the total asset of the company. The total shareholders’ equity for the period was $182.342 million. By the end of 1H FY2019, Experience Co had net cash and cash equivalent of $12.848 million.

On 6 May 2019, the company announced the appointment of John O’Sullvan as the company’s CEO.