Founded in 1925, Embelton Limited (ASX: EMB) operates in two main industries: noise and vibration isolation, and flooring. The company also has manufacturing operations in rubber and cork sheeting and metal fabrication. It is headquartered in Melbourne, Victoria and its products are seen in several major projects throughout Asia, Australia, Europe and the Middle East.

Embelton is one of the largest wholesale distributors of flooring in Australia which has formed its reputation for its service, quality and engineering innovation. The company has several key distribution relationships in the South Pacific and Asia for its vibration control products.

In a recently released announcement, the company notified that its second-half earnings will be affected due to the slowing construction environment throughout Australia. Also, the company mentioned that its reduced second-half earnings will contribute little to the full year result. The company informed that there were significant delays in contracted project work, a greater than expected fall in demand from retail partners and increased product costs flowing from the continuing decline in the AUD.

The costs associated with planning for the company’s expanded contracting activities continued during the second half, which although ensures that the company is well placed to deliver on the healthy pipeline of committed projects. However, the benefits from the work will not be realised until the new financial year due to the widespread construction delays during the past three months.

The company has paid an ordinary fully paid dividend related to a period of six months. The total dividend amounted to AUD 0.20 (100 per cent franked) with 30 per cent corporate tax rate applicable for franking credit.

In its recently released half-yearly report for the half-year ending 31st December 2018, the company reported a revenue of approximately AUD 31 million during the period. 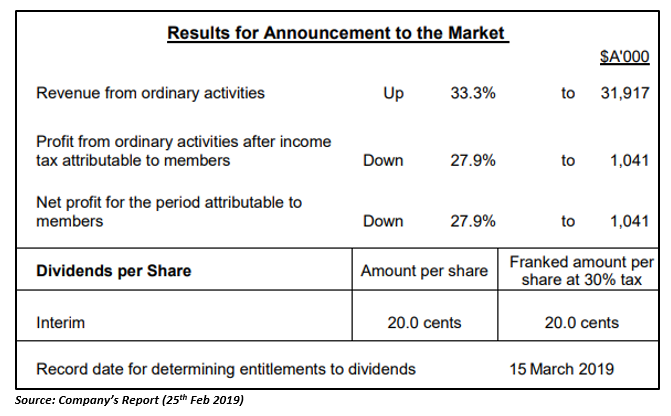 As indicated in the above figures, the profit from ordinary activities after income tax attributable to members declined 27.9 per cent during the period to around AUD 1.04 million.

The company’s stock has generated a negative return on a YTD basis of 9.09 per cent while it delivered a positive return of 67.21 per cent in the last five years.