Australian market slid into negative territory after opening the day at higher note, as investors absorbed data reflecting a higher jobless rate for June. The benchmark index S&P/ASX200 was down by 0.69%, and settled at 6010.90 points, on 16 July after recording a high of 6078 points during the trading session.

Unemployment numbers jumped to 7.4% in June

The unemployment rate rose from 7.1% to 7.4% (seasonally adjusted) in June despite the addition of about 211k jobs as more people entered the labour force, as per the latest figures released by Australian Bureau of Statistics (ABS).

Though the country recorded its biggest monthly job gain in June due to reopening of the economy after COVID-19 induced lockdown in place, an upsurge in several unemployed people looking for work forced unemployment rate to shoot up.

Bjorn Jarvis, head of Labour Statistics at ABS stated that an extra 280k people were added to the workforce due to relaxation of coronavirus restrictions in June, with more people employed and more people actively looking for work. He said that about 24% of the decline in employment numbers by May was recovered in June.

Employment rose by better than expected numbers of 210,800 people between May to June (addition of more than double estimates) after May's job losses were revised upwards by about 40k to 264,100.

Some highlights of key figures are as follows: 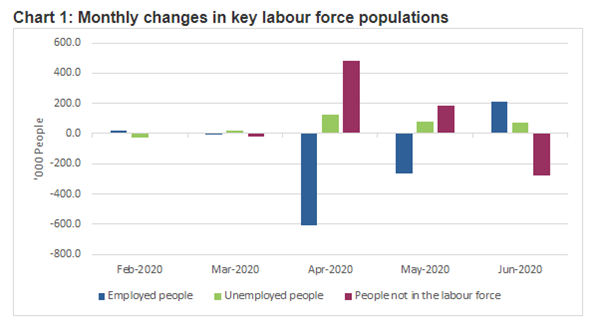 The surge in hiring with the reopening of economy might be reversed as Melbourne undergoes a second lockdown for 6 weeks period amid continuous spurt in new cases. Moreover, Victoria state reported 317 new cases on 15 July.

Unemployment rates rose for most of the states barring Queensland and the Northern Territory, where they decreased to 7.7% and 5.7%, falling by 0.1 points and 1.8 points, respectively. The most significant rise in unemployment numbers was recorded in South Australia and Western Australia of 8.8% and 8.7%, respectively.

However, all states recorded an increase in employment figures and participation rates except Northern Territory, which witnessed a small decrease. The biggest rise in employment was registered in New South Wales, Queensland, and Victoria.

Major Banks forecasts of unemployment and subsidies ahead

The jobs market has largely stayed funded by the Federal Government's JobKeeper and JobSeeker programs. Lately, Josh Frydenberg, Treasurer had stated that an effective rate of unemployment rate would have peaked to nearly 13.3% without the wage subsidy programs in place.

The effective rate includes people who have withdrawn from workforce and those who are working 0 hours.

Alan Oster, a National Australia Bank economist, has recently forecasted a lower peak jobless rate to touch above 8% in 2020, but would be near 7% by late 2021. He also expects that JobKeeper would phase out gradually, and JobSeeker payments would not be fully scaled back to newstart levels.

Australia and New Zealand Banking Group has forecasted the unemployment rate to rise to 7.5% by Q4 even if employment rises and anticipates jobless rate to remain at a high point of 6% until well into 2021.

Fiscal support is scheduled to be terminated in September. Bill Evans, Chief Economist, Westpac has also predicted a partial extension of JobKeeper for about a third of the present 3.3 million beneficiaries and a drop in JobSeeker payments of about $300 in contrast to the present rate of $500 cut.

Prime Minister Scott Morrison has admitted that the actual situation is much graver and expects next month's figures to reflect the impact of the second lockdown in Victoria. However, he expects total number of jobs to increase, as more and more states and territories have reopened now.

Some setbacks in unemployment numbers might be witnessed next month due to rise in fears of the second wave amid Victoria’s second round of lockdown.