E2 aims to raise a capital of approx. $2.2 million to accelerate the exploration of the company’s gold and silver projects in the Santa Cruz provinces of Argentina.

Santa Cruz is a mining friendly state which hosts one of the South America's most prolific gold zone; the provinces have revealed various ‘company making’ discoveries including Andean Resources and Extorre Resources, which got acquired for $4.73 billion and $430 million respectively.

E2M holds many prospects in the provinces, and few of them are near to the previous discoveries, which accounts for 90,000 hectares with 80 percent ownership. 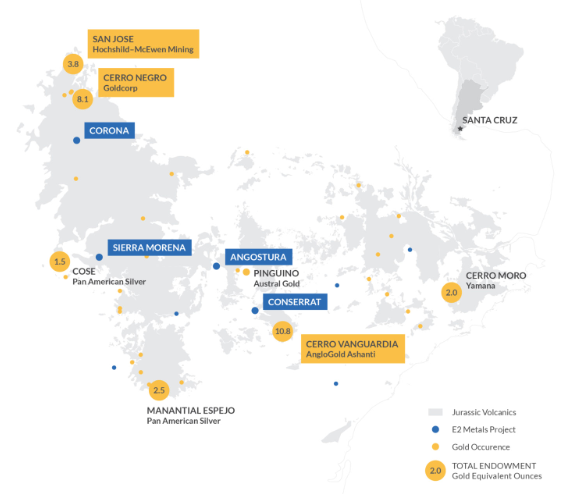 The Conserrat Project of the company is along trend from Cerro Vanguardia, and E2M has planned drilling work on it in the second half of the year 2019.

The project is adjacent to the company’s existing operations and E2 had completed a drilling program at the prospect in April and assay results are awaited.

As per the company, the project is alike Newmont Goldcorp’s world-class Cerro Negro mine, with compelling geology and contains multiple early stage targets.

Corona prospect is in the prolific Rio Pinturas Fault Zone, which hosts Cerro Negro and San Jose Mines. It is 30km south to the Cerro Negro mine, with more than 8 million gold equivalent ounces present, and the prospect shows similarities to the Newmont Goldcorp’s recent Silica Cap discovery.

The company included Corona Norte Sinter in the target priority as the prospect resembles Cerro Negro, with an extensive alteration system in northwest structure and Chon Aike volcanics.

The drilling results of the Eastern Vein are as:

The drill hole identified as SMRC-11 intercepted 4m at 102 gram per tonne silver from 42 metre downhole.

The company drilled a hole in the Southern Project Area as well which identified new gold and silver mineralisation, which in turn, signifies that the prospect contains high potential.

The drill hole identified as SMRC-23 in the southern area intercepted 1m at 0.35 gram per tonne gold and 31.4 gram per tonne silver from 23 metre downhole.

The results of Western prospect are as follows: