Pushpay Holdings Limited (ASX: PPH) is engaged in the provision of the donor management system. It provides finance and donor tools along with custom community app for the non-profit organisations, faith sector and education providers in Australia, Canada, the US and New Zealand. Over the year ended 31st March 2019, the company processed 18.9 million transactions with an average transaction value of US$192 million. As at 31st March 2019, the company had a total customer count of 7,649 across multiple locations, including Canada, Alaska, Redmond, Hawaii and the USA.

In a recent announcement, the company updated that the Co-Founder and former CEO, Christopher Benjamin Heaslip, engaged Deutsche Craigs Limited to manage the partial sale of his associated interests’ shareholdings in the company via a fully underwritten bookbuild. The sale of the shares is anticipated to be completed on 9th July 2019. The notice further stated that the offer and acquisition of ordinary shares will not have any material impact on the control of the company. The bookbuild will provide Pushpay with further free float and liquidity to support Pushpay’s index weightings.

Details on Sell Down: The partial sell down of the shares will include a bookbuild for sale of 12.24 million fully paid ordinary shares in Pushpay, comprising 4.45% of the issued capital. The sell down represents 41.20% of the ordinary shares held by Co-Founder and Non-Executive Director in the company. To conduct the bookbuild, the company has been granted a trading halt. The trading is expected to resume on 04th July 2019. There exists an escrow deed between interest associated with Chris Heaslip and Pushpay to restrict them from selling or disposing of the remaining holding for a period of 18 months from the date of settlement of the bookbuild transaction unless approved by Pushpay or in case of certain exceptions. The remaining holding consists of 3 million shares held by FNZ Custodians Limited as custodian of security and loan facility arrangements with Bank of New Zealand.

As on 31st March 2019, the company had a total of 7,649 customers, which depicted an upliftment of 5% over the previous year number of 7,276. Total Lifetime Value of the customer base, i.e. the value that reflects gross margin expected over the lifetime of a customer, went up from US$1.9 billion to US$3.0 billion, up 64% on the previous year. The company also witnessed a rise of 33% in average revenue per customer, which amounted to US$1,315 per month in the current year as compared to US$989 per month in the previous year. Staff headcount also went up during the period by 11%, from 350 in the prior year to 389 in the current year. Cash and cash equivalents for the period amounted to US$13.9 million, down 22% on the prior year value of US$17.9 million.

The period was marked by margin improvements and expanding operating leverage. The company reported an increase in gross margins from 55% to 60% for the year, in line with the guidance provided. The company witnessed a 42% rise in the operating revenue, with operating expenses remaining stable. As a percentage of operating revenue, there was an improvement of 28 percentage points in the total operating expenses, from 93% in the previous year to 65% in the current year.

Leadership Changes: During the year, the company also saw appointments and resignations from key positions on the Board. Chris Heaslip ceased to be the Chief Executive Officer, effective 31st May 2019 and continued his role as a Director of the company. Bruce Gordon was appointed as the CEO in place of Chris, effective 1st June 2019, along with his continuation as a Director on the Board. The company also appointed Graham Shaw as the Chairman of the Board. During the period, Peter Huljich replaced Christopher Huljich as a Director on the Board and Dan Steinman conveyed his intention to discontinue his role as a Director. In addition, the Board is searching for candidates with suitable qualifications to be appointed as an additional New Zealand based Director and an additional US-based Director.

Stock Performance: The stock of the company last traded on 2nd July 2019 at a market price of $3.650. The company’s stock has generated returns of 6.10% and 14.78% over a period of one and three months, respectively. It has a market capitalisation of $1 billion and Price to Earnings multiple of 37.75x. During the year ended 31st March 2019, the company reported robust growth across key financial metrics. Pushpay witnessed a significant outpouring with revenues rising at a rate of 40%. Subscription revenue for the period increased by 35% and processing revenue increased by 44%. FY19 was a year of profits against FY18, when the business reported a loss after tax and negative EBITDAF. EBITDAF as a percentage of operating revenue was 9% during the current year as compared to -21% in the previous year. In addition, the percentage saw a continuous improvement from the period starting 31st March 2016 through to 31st March 2019, as depicted by the graph below. 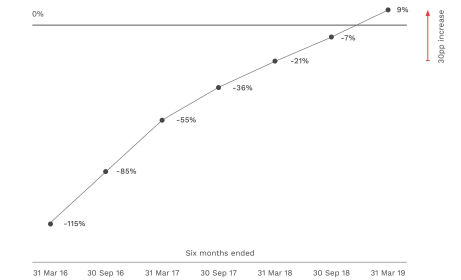 EBITDA as a Percentage of Operating Revenue (Source: Company Presentation)

It goes without saying that the company reflected a remarkable performance on the customer front, whether in terms of a number of customers, total lifetime value or average revenue per customer. The above-stated factors in amalgamation are a favourable reflection of the company’s performance in the upcoming years.