On 14 May 2019, Diatreme Resources Limited (ASX: DRX), an Australian Stock Exchange Listed emerging silica sands explorer and developer announced the maiden Indicated Resource estimation of the company for its Galalar Silica Project, which is located near the world’s largest operating silica sand mine at Cape Flattery.

The company has previously announced the exploration target for the Galalar Silica Project.

The company mentioned that Ausrocks Pty Ltd assessed the mineral resource independently and with newly identified satellite deposit at West Nob point, the Maiden Indicated Resource is estimated to be at 21.5 million tonnes, which accounts for more than 99 per cent of silicon dioxide.

Diatreme undertook bulk testing previously, and the results signified the project’s ability to produce a premium-grade silica product with silica sand at 99.9% of silicon dioxide, which includes the iron content below 100 parts per million and is 125-600 micron in size. The quality of the premium-grade mentioned above meets the requirement for high-end glass and solar panel manufacturing, which in turn, could attract high premium prices.

The final product demonstrated excellent recovery rates during the testing, and the results further indicated towards the potential of obtaining secondary, high-value heavy mineral sands during mining, which further adds to the project’s value.

As per the IMARC Group, the global silica market is heading towards a US$10 billion annual revenue by 2022, with an estimated CAAGR (compounded annual average growth rate) of 7.2%.

As per the company’s estimation, the total Inferred Category Mineral Resources stand at 8.7 million tonnes with a grade of 99.25% of silicon dioxide, 0.11% of aluminium oxide, 0.09% of iron oxide, 0.11% of the lithium-oxygen index and 0.10% of titanium dioxide.

The mineral resources include the resources from both the East Nob and West Nob point of the project. 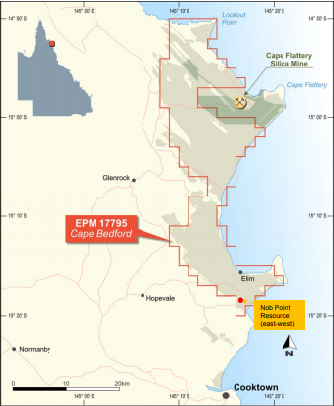 The resource differentiation as per the location of east and west nob points are as:

Observation, Parameters and Assumption led to the classification of mineral resource to Indicated Category (JORC 2012) by the independent consultant- Ausrocks Consulting Mining Engineers includes of:

Target material in-situ density being at 1.62t/m3, with a cut-off grade material of greater than 99% of silicon dioxide, and factors like Topography, Topsoil Thickness, Top and Base estimation of Resources, etc.

The shares of the company, by the end of the trading session, closed flat at A$0.012.