Lithium market has come under tremendous pressure over falling prices of various lithium products and sources, including lithium carbonate, lithium hydroxide, spodumene prices tumbling considerably since the beginning of the year.

Over the plunging prices, the lithium production scenario is becoming more volatile with many lithium mining companies across the continent, putting their operations on care and maintenance while keeping production minimal in line with the existing offtake.

Furthermore, prices are anticipated by many industry experts to remain flat over the short- to medium-term until 2022, after which, the market is expected to tighten as electric vehicle manufacturers continue their expansions, which could support the lithium demand ahead.

The Department of Industry, Innovation and Science (or DIIS) now anticipates that the global lithium demand would surge by ~ 60.46 per cent from 285,000 tonnes of lithium carbonate equivalent (or LCE), estimated for 2020, to reach 414,000 tonnes by 2022.

In the recent past, China has further extended the subsidy on EV purchase with scaled reductions from 10 per cent to 30 per cent over the next three years for vehicles with a maximum price of USD 42,400 a unit, leading to a change in battery chemistry away from cobalt and back to lithium iron phosphate batteries, which in turn, could further support the lithium trade.

Tesla Gigafactory in China is producing nearly 10,000 units a month, and with the recent change in Chinese subsidy, the Company has reduced prices of its Model 3 to retain subsidies, which along with changing battery chemistry from cobalt to lithium-based batteries could bring the costs as low as USD 100 a kilowatt hour, which could further boost the lithium demand.

The COVID-19 outbreak has disrupted the supply chain for many commodities in the recent past, including copper, nickel, lithium, silver, and coupled with the fact that Australian miners are already favouring a pullback over lower prices, it could support lithium prices over the coming years. 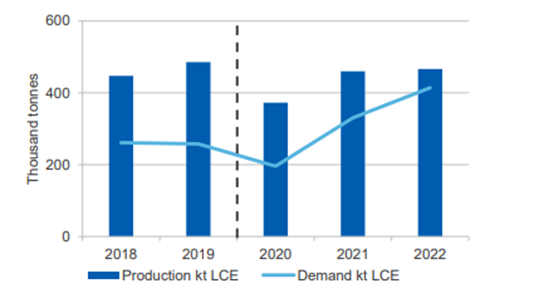 In a nutshell, lithium market looks poised to recover from the recent plunge over the coming years due to increased subsidies on EV sales provided by various governments across the globe and supply disruptions emerging from COVID-19 outbreak.

Apart from that, the recent production pullback from global lithium mining companies is estimated by industry experts to narrow the demand and supply gap, which previously remained large over the lithium supply glut.