Rio Gains Ticket to The Lithium Industry, While Mining Stocks Inch up on ASX- WSA, WHC

Many ASX mining stocks are gaining momentum after witnessing strong quarter in terms of operational and financial efficiency, while the ASX heavyweight -Rio Tinto (ASX: RIO) is gaining traction amid latest lithium discovery in California.

Rio’s Ticket to the Lithium Industry

The Lithium market is already concerned over the lithium supply glut, which is currently being tackled by investors over the demand estimation; however, China’s dominance in the lithium space is particularly pricking the United States, which is calling for strength in the domestic supply chain.

From the United States Senators to President Donald Trump, all are pointing towards China’s dominance in the lithium market and pushing for the domestic supply to avoid any bottlenecks in the lithium supply ahead.

Rio Tinto- which conducts its operation in various economies with listing on the London Stock Exchange and the Australian Securities Exchange has recently given hope to the United States by claiming that the miner could become one of the largest battery-grade lithium supplier in America if further trial proves successful.

The miner unfolded a large potential source of lithium while looking for gold in piles of waste rock of borate in California. The Lithium supply chain is being largely controlled by South America and Australia, and out of top five global lithium supplier- two miners are Chinese, apart from that, China’s increased exposure in the Australian miners could further provide strong footing to China in the lithium industry.

The Deeping roots of China in the lithium space is pricking policymakers of the United States, already engaged in a trade war with China, which in turn, is prompting the nation not only to secure the supply chain outside China but also increase the domestic lithium supply. As of the prevailing scenario the U.S lithium supply is negligible.

The company calls lithium discovery at California a “Eureka” moment as it opens a vast opportunity for Rio to tighten grip over the lithium industry, which the miner sought previously in the form of stake acquisition in SQM- the behemoth lithium chemical developer from Chile.

However, China’s Tianqi Lithium ended up having the stake in SQM, which left Rio empty-handed over the lithium space.

To dig the supporting pillar deep, Rio now plans to invest an initial $10 million over a pilot plant (on-site), which would purify the waste rocks and extract lithium into a form suitable for the electric vehicle batteries.

While Rio is gaining traction over the presented opportunities, other ASX mining stocks are active on ASX amid strong quarterly performance.

WSA- the ASX-listed nickel miner reported a strong quarter with over 7 per cent higher nickel production for the quarter ended 30 September 2019. The company mined 5,805 tonnes of nickel during the quarter with an average grade of 3.9 per cent.

The company managed to sell 5,051 tonnes of nickel during the quarter, down by over 16 per cent against the previous quarter; however, a 29 per cent hike in net realised price offsets the lower sales.

The overall production scenario remained as below: 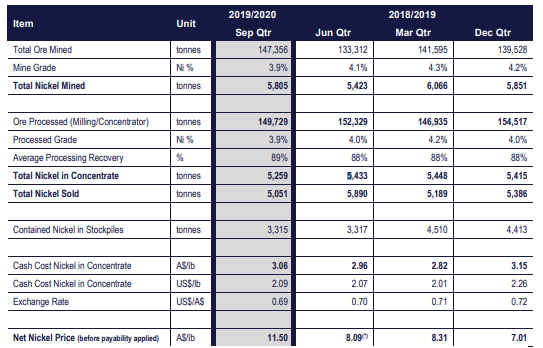 The closing cash balance for the quarter stood at $165.9 million, up by almost 15 per cent with the addition of $21.6 million cash inflow during the quarter.

Western Areas also received $33.1m in exchange of the company’s holding in the Kidman Resources over its 17.4 million shares in KDR, now acquired by Wesfarmers Limited (ASX: WES).

WSA also entered into the medium-term hedging to manage the risk of price fluctuations with max 25 per cent of the anticipated sales per month hedged out for a period of 12 to 18 months.

The snippet of the quotation period and the medium-term hedge is as below:

The coal stock at the end of the period declined by 7 per cent to stand at 441k tonnes.

The coal stock at the end of the period increased by 268 per cent to stand at 949k tonnes.

The FY20 managed ROM coal production guidance remains in the range of 22.0 to 23.5 million tonnes with managed coal sales of 20.0 to 21.0 million tonnes.

The unit cost guidance (excluding royalties) remain at $70 a tonne.

To conclude, the ASX mining stocks are gaining momentum in the market amid strong quarterly performance, and when the miners on ASX remain in momentum, the giant miner Rio was presented with an opportunity of gain entry in the lithium industry, which in turn, is keeping Rio under the investors’ radar.