Fortescue Metals Group Limited (ASX:FMG) is once again under limelight as the company takes a leap towards the renewable energy front.

In June 2020, the Company announced an industry-leading emission reduction target of reaching a net-zero emission by 2040, and after that, the iron ore miner is once again making it to the headlines.

FMG has now confirmed that it has entered into a Deed of Agreement (or DoA) with the Papua New Guinea (or PNG) Government and its wholly-owned corporation – Kumul Consolidated Holdings Limited through the wholly-owned subsidiary - Fortescue Future Industries Pty Ltd.

Under the Deed, both parties have decided to investigate the feasibility of potential projects for the development of PNG’s hydropower resources – a move which would support green industrial operations for the international market and the local industrial energy consumption.

FMG has been committed to incorporate high renewable sources into its operational energy mix, and the current Deed remains consistent with Fortescue’s record of delivering both capital growth and yield to shareholders while benefiting local communities through sustainable development and employment.

In a notification to stakeholders, FMG stated that its wholly-owned subsidiary - Fortescue Future Industries shares the core commitment of the Company for green industry future and would work closely with local people and communities to establish training and long term careers.

Furthermore, the Company stated that subject to the completion of feasibility studies and approvals, Fortescue Future would establish and develop individual projects outside the purview of FMG for ownership and project finance sources without recourse to FMG.

However, the execution of studies, along with the approach concerning capital investment and development, would be consistent with FMG’s track record of developing multi-billion dollar projects across the Pilbara Region, WA.

The market reacted sharply over the Company’s leap into the green space with the stock witnessing a gap-up opening post the announcement during the trading session on 2 September 2020.

In the recent past, the stock has corrected from the top of $19.560 (intraday high on 28 August 2020) over the anticipated gradual recovery in the iron ore supply chain. However, the stock is still trading around the upper levels over its strong financial performance and market sentiments.

The iron ore supply lag, which has been one of the most important factors behind the rally in ASX-listed iron ore stocks, along with robust demand for the commodity in China, is estimated by industry experts to eventually recovery and offset the lag created by bad weather and COVID19- imposed challenges.

The anticipation of a gradual recovery in the iron ore supply chain is now keeping a lid on the stock price of many ASX-listed iron ore mining companies, including FMG.

However, the leap of the Company towards the green industry once again seems to be lifting the market sentiment.

FMG on a Daily Chart 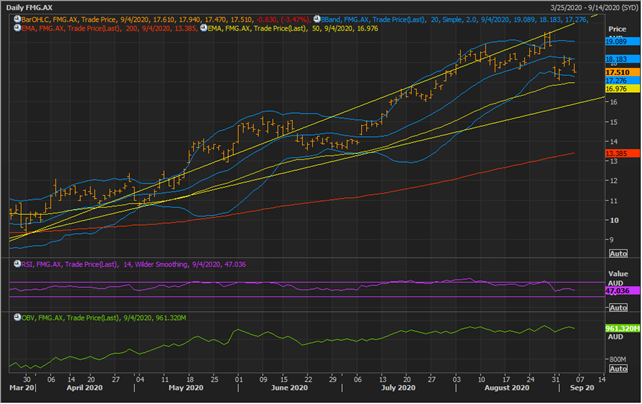 On following the daily chart, it could be seen that the stock is currently moving in an uptrend with prices trading above the 200-day and 50-day exponential moving average. 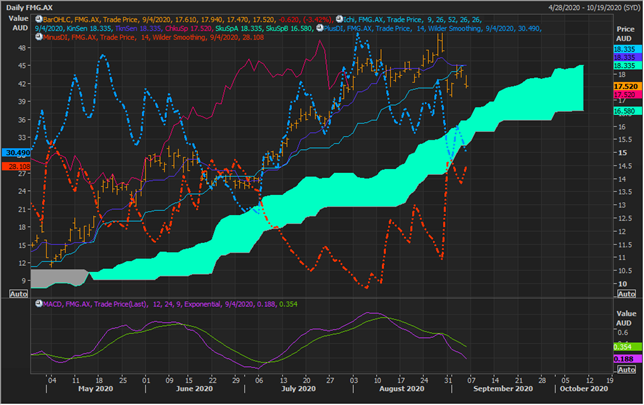 On applying the Ichimoku Kinko Hyo on the daily chart along with directional signals, it could be seen that the stock is trading above Span A, which itself is above Span B, suggesting that the primary trend is an uptrend.

Also, a positive crossover between the conversion line and the base line above Span A could give some relief for the bulls.

The pair of the directional signal is also showing a positive read with plus DI trading above the minus DI with a positive cross.

In the recent past, the plus DI slightly reached the minus DI; however, market sentiments once again uplifted the price, preventing any negative cross between directional signals.