General Electric’s shares have fallen down drastically in response to the recent news alleging that the company has come up with misleading and fraudulent financial statements, hiding its financial problems. In Thursday’s trading session, the stock went down by 11.3% and ended at a price of $8.01. Prior to this, the stock last saw a major decline in April 2008 when the shares fell by 12.79%. Due to Thursday’s trading session, the stock’s year-to-date returns went down to around 3%.

The company saw the threat falling upon it, when Harry Markopolos, a whistleblower on the Bernie Madoff’s Ponzi Scheme, released a 175 pages report that stated the company’s financial problems in detail and problems in accounting issues related to its oil and gas unit. The company also stressed the need for the company to raise its insurance reserves.

The report released states General Electric as a bigger fraud than Enron. As per the research done by the whistleblower, the discovered fraud has left General Electric on the verge of insolvency. On analysing the company’s position for a period of 7 months, the researcher and his team identified a fraud of $38 billion. This amount, they say, is just a minor part of the actual fraud stating that the company has a long history of accounting fraud, dating back yo 1995.

As per few media reports, the company may not survive this turmoil for long and possibly be required to file for bankruptcy.

In the report prepared by the researcher, General Electric was accused of hiding potential losses worth US$38 billion. The report stated that the company’s debt and cash position was worse that what it appeared to be prima facie. Against the debt to equity ratio of 3:1, disclosed by the company in its financials, Markopolos’ report mentioned that the company is extremely debt-ridden with true debt to equity ratio of 17:1.

In addition, the report claimed the company to be insolvent, with a working capital deficit of US$20 billion in relation to its industrial units. The report also focused on the company’s long-term insurance unit, that required the company to increase its reserves by $15 billion last year. The researcher examined other companies in the same business and concluded that GE has been hiding huge losses which will amplify as the policyholders grow older.

The report also contained some issues regarding the company’s accounting on its oil and gas business, Baker Hughes. As stated in the report, GE’s case appears to be far more serious than Enron or WorldCom with an accounting fraud estimating to US$38 billion that accounts for almost 40% of its market capitalisation.

As per few media reports, the company’s CEO declared the 175-pager report as pure market manipulation containing factual errors. GE stated that the report released by Markopolos is an attempt to generate profits from short selling of the company’s stock to create unnecessary volatility. The company stated that it has maintained its financial reporting to the highest level of integrity and has disclosed its financial obligations in detail. In response to allegations in the report regarding increase in reserves, the company stated that it currently holds sufficient amount of reserves to support its portfolio characteristics.

Addressing the allegations regarding its liquidity, the company claims to have a strong liquidity position, having ended the second quarter with $16.9 billion of Industrial cash, access to credit facilities worth $35 billion and $12.5 billion liquidity at GE Capital. As a response to the stock movement, the company’s CEO Lawrence Culp purchased 252,000 shares at $7.93 each, making a total investment of $2 million.

In the financial results for second quarter of 2019, the company reported a growth of 4% in organic orders as compared to prior corresponding period. Organic revenue growth for the industrial segment was reported at 7% and the backlog went up by 11% amounting to $396 billion over prior year. Growth in the backlog was partially supported by the company’s record wins at the Paris Air Show. The period saw a contraction of 300 basis points in the industrial organic profit margins owing to declines in GE Renewable Energy, GE Power and GE Aviation. Adjusted earnings per share for the period were recorded at $0.17, that included a benefit amounting to $0.06 from resolution of a tax audit matter. 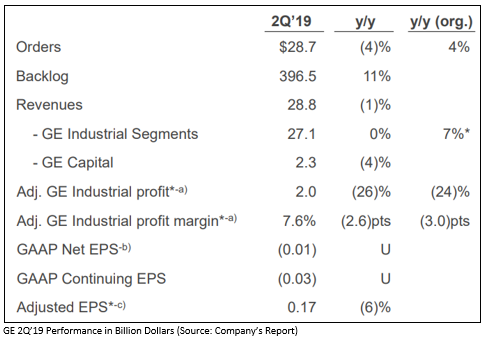 The company is continuously focused on improving its financial position, as suggested by the recent changes in stake, fund settlement, sale of business etc; some of the which are explained below:

The management stated that the company delivered upon its strategic priorities in 2Q’19 and will continue to work on improving its business for the benefit of its customers. The revised guidance for full year financial results came in as a result of power execution & the business’ return to profitability which depicts early signs of progress in performance. During the quarter, the company continued to strengthen the Aviation and Healthcare businesses. As a result of execution of projects at a lower than expected cost, the company lowered the guidance for restructuring expenses.

Backing its stand regarding the financial position, the company stated that it has reported better second quarter earnings than its expectations, along with a favorable full year outlook. Hence, the company declares the allegations made in Markopolos’ report to be false and misleading.