In a recent update, the company has notified about initiating an RC (Reverse Circulation) exploration drilling program at the Barkly Projectâs most advanced prospect, the Bluebird Prospect.

Earlier on 30th October 2019, the company notified about the likely commencement of drilling program. 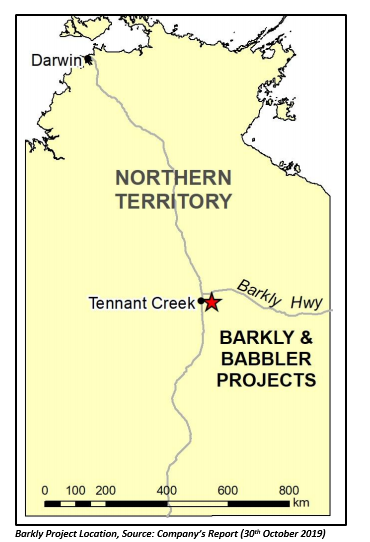 The RC exploration campaign will involve 1,320m of drilling over six drill holes to test the extensions of the high-grade mineralisation and down dip/plunge extensions at the Bluebird Prospect.

The focus of the drilling program will be on the Bluebird Prospect, a long gravity anomaly of 1.6km open to the east, whereby shallow geochemical drilling has determined a 600m long copper anomaly overlying a gold-copper-bismuth mineralisation zone.

The drilling program has been planned to review the following:

Blinaâs key objective is to carry out further drilling at the Bluebird Prospect to estimate a mineral resource (JORC compliant) and ultimately to establish a mining project.

The Barkly project is located in the same geological province as WestGold Resources Limitedâs Rover project, presently being spun out to Castile Resources Pty Ltd, with strong investor interest in the Tennant Creek region.

Barklyâs highest priority prospect, the Bluebird Prospect has delivered significant Au-Cu-Bi mineralised intersections in a recent exploration drilling, as given below:

The drilling indicated the mineralisation, starting at less than 50m below surface, is now defined to a depth of at least 150m vertically from surface and over a strike length of up to 120m. Follow-up Diamond Drilling (DD) and RC percussion at the Bluebird Prospect has proven Tennant Creek-style Au-Cu mineralisation.

Additional targets with identical geochemical and geophysical responses have also been detected along strike from the Prospect, with further exploration planned for future.

Blina informed that the systematic close-spaced exploration is planned to clearly define the grade and the geometry of the known mineralisation at the Bluebird Prospect. The company has also planned for additional drilling to test geophysical anomalies discovered in downhole probe surveys.