Bellamy's Australia Limited updated the market on 16 September 2019 regarding a Scheme Implementation Deed with China Mengniu Dairy Company Limited, owing to which the ASX-listed stock soared up by 54.928% and closed at $12.89 by the end of the day’s trading on 16 September 2019. The closing price of BAL was towards its 52-week high price.

Let us have a detailed look at the scheme implementation deed entered between BAL and Mengniu, owing to which its share price zoomed by ~ 55%. Additionally, let us touch upon other two major players in the related space - The A2 Milk Company Limited and Blackmores Limited.

Bellamy's Australia Limited (ASX: BAL) is a consumer staples sector player that was founded by a Tasmanian mother in the year 2004. BAL is a producer as well as distributor of branded food products for babies, toddlers and children that are wholesome, nutritious and made in Australia.

The ingredients used by the company in its products are of high quality, as they come from the farmers and producers who are abiding by the highest certified organic practices. 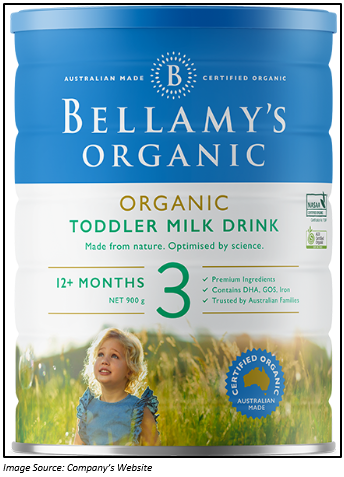 China Mengniu Dairy Company Limited ranks among the leading dairy product manufacturers in China. The company with a market cap of ~ $24.6 billion is listed on the Hong Kong Stock Exchange. Mengniu and its units are engaged in the production as well as distribution of premium dairy products in China, with manufacturing sites in Indonesia as well as New Zealand.

The products of Mengniu are distributed in various regions beyond China via its overseas sales network. The company caters to markets including Hong Kong, Singapore, Macau, Myanmar and Indonesia.

The A2 Milk Company Limited

The A2 Milk Company Limited (ASX: A2M) targets global markets with its branded dairy and infant formula products. The company operates as a manufacturer, marketer and seller of these products.

On 17 September 2019, A2M released its Investor Strategy Day presentation. The company in the presentation highlighted its past extraordinary experience.

In the next phase of its evolution, the company would be pursuing two biggest consumer markets in the world. 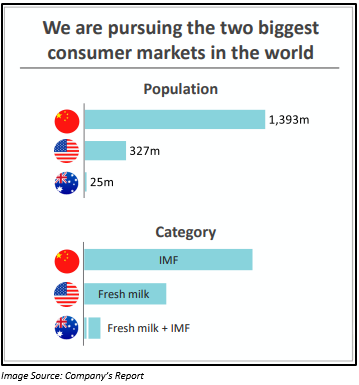 A2M would maintain its key focus on core markets and existing products. New products and new markets would be at the second and third place, respectively, in terms of the company’s focus.

The A2 Milk Company would also continue to invest in increasing and deepening its consumer understanding and engagement. It would focus on the adaptability to continue to evolve the settings of its changing business and preservation of passionate belief and the core values of the company’s culture.

In the past five years, The A2 Milk Company has seen continuous growth with respect to revenue and earnings. Growth in fresh milk remains the highest since FY2015 with a value market share of 11.4%. The company also reported an increase in brand awareness as well as highest loyalty of any other milk brand.

A2M would be accelerating its focus and investment in Greater China. China is amongst the big and complex consumer markets and has a strong regional influence. The Asian country also has the biggest, most dynamic retail landscape in the world.

Blackmores Limited (ASX: BKL) is a leading natural health solutions company in Australia with a market cap of $1.46 billion (as on 17 September 2019). The company provides a total of 179 products. BKL holds proficiency in vitamins, minerals, herbs as well as nutrients, owing to which it develops products and services that have a natural approach towards health.

Sales increased by 30% and EBIT went up by 218% in other markets in Asia. Total ordinary dividend in FY2019 stood at 220 cents per share (fully franked). 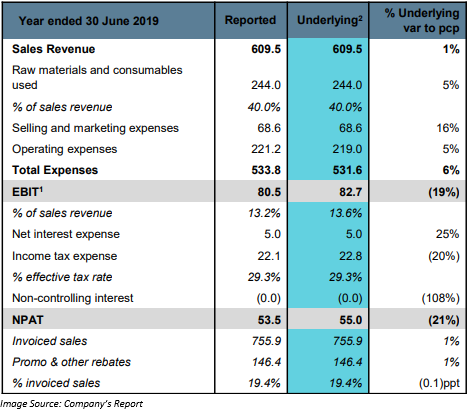 CLICK HERE FOR YOUR FREE REPORT!
Tags:
BAL News Food and beverage
All pictures are copyright to their respective owner(s).Kalkinemedia.com does not claim ownership of any of the pictures displayed on this website unless stated otherwise. Some of the images used on this website are taken from the web and are believed to be in public domain. We have used reasonable efforts to accredit the source (public domain/CC0 status) to where it was found and indicated it below the image.