The growing popularity of digital media has raised some concerns regarding the survival of print media. In the age of mobile phones and social networking apps, a large number of audience members are interested in digital media.

Despite the rising favouritism towards digital content, The Australian Financial Review, Australiaâs leading business and finance news, witnessed a rise in its print readership during July 2019. However, in August 2019, the numbers were slightly lower than July, as reported by emma (Enhanced Media Metrics Australia). Let us now look at two leading media companies and the performances of their digital and print divisions.

From Dow Jones, The Wall Street Journal and The Times of London, to growing digital property platforms, realtor.comÂ® and REA, and one of the leading publishers, HarperCollins, News Corp is a uniquely influential media company.

The company is at the forefront of technological and creative innovation, with groundbreaking digital membership and subscription models for its mastheads and channels, the embrace and expansion of audio, and robust leadership in the digital property sector.

The Wall Street Journal, The Times and Sunday Times and The Australian all witnessed an increase in their subscriber volumes at a healthy rate, with digital now accounting for the majority of subscribers. During the year, The Wall Street Journal experienced 14 per cent growth in digital-only paid subscribers while circulation revenue trends at Dow Jones remained robust, rising 7% for the year, well above that of the competition.

In Australia, there was a tangible improvement in profitability mainly due to the increase in digital subscriptions, which exceeded 517,000, up 24% on pcp (previous corresponding period). âThe Australianâ was a notably strong performer while news.com.au remained Australiaâs number one news website throughout the fiscal year, with monthly unique visitors topping 10 million and total visitors of over 91 million in June.

In the U.K., in constant currency, The Times again witnessed revenue growth in print advertising with Digital paid subscriptions at The Times and Sunday Times expanded by 19% to 304,000.

Kayo, on the other hand, also witnessed material acceleration in subscriber additions, with over 330,000 paid subscribers at FY19 end with high level of audience engagement.

News Corp believes that it is well positioned to take advantage of the worldâs growing appetite for quality content, data and audiences. The company is focused on maintaining strong financial results through disciplined financial policies, strategic reinvestment and leveraging the linkages between its global business units, premium brands and audiences.

In 2019, Nine laid the foundations for its long-term growth with the merger with Fairfax which created a business with four key operational pillars:

The merger with Fairfax changed the scale of Nineâs business, creating one of the largest multi-platform media companies in Australia and allowing it to bring together premium assets that are complementary.

During FY19, the companyâs growth in Video on Demand platforms and Metro Media has more than offset the short-term cyclical issues faced by its Broadcasting and Domain businesses, resulting in a 10% increase in combined Group EBITDA for the year (on a pro-forma basis), on broadly flat revenues. 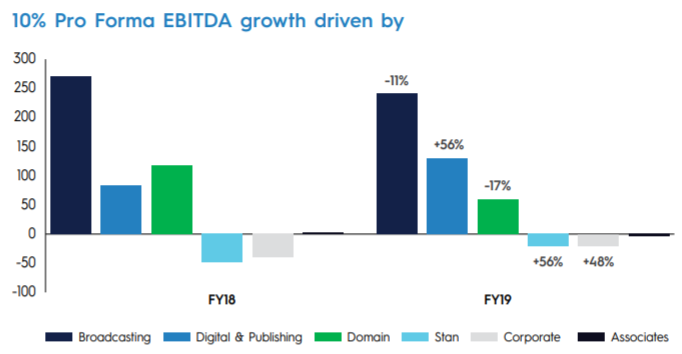 During the year, 9Now continued its dominance of the strongly growing Broadcast Video On Demand (BVOD) market with revenue growth of nearly 70%, outperforming the overall market and with much of the associated cost already expensed through television.

Metro Media performed strongly in FY19, with revenue growth of 3% coupling with a 5% cost decline, for an EBITDA increase of 65% to $83 million.

In addition to this, Stan also performed well during the year, with positive cash flow in the second half, and with more than 1.7 million increasingly active and loyal subscribers.

During the year, Nineâs Broadcasting division, which comprises Nine Network as well as the consolidated results of Macquarie Media reported EBITDA of $241 million on revenues of $1,222 million for the year.

To know more about the FY19 results of media stock, click here.

In the coming years, the company will continue to work on improving the relative performance of the traditional businesses, while containing costs.

The figures of the above-mentioned companies are demonstrating the increased growth in the audience of digital media. However, the print media still has a strong base of audience. A media company must try to strike the right balance between digital and print media, in order to gain the attention of the audiences of both the mediums.