At present, the world economy is undergoing recession, and there is extreme uncertainty surrounding the market. The stock market is going topsy-turvy on every piece of news, thanks to the Great Virus Crisis (GVC). The prolonged virus crisis is posing multiple challenges for businesses, and also changing consumer behaviour. It seems that the world has entered a disaster, which does not seem to have an exit soon.

In the current virus-stricken world, the sentiments in the US market is deciding the ASX and other European countries trading session patterns. The world's top economies- the US and China are facing a difficult time dealing with the second wave of coronavirus. The first wave itself created much destruction in both the countries, with second wave of COVID-19, the morale of people has further gone down. Also, economic activities have again reduced in the affected areas.

The crisis is unprecedented and challenging at multiple levels. Until the virus infection is controlled in affected regions, economic activities cannot resume, and the economy recovery will be difficult.  What is adding to investors' woes is the changing international equations during the pandemic.

Given the backdrop of COVID-19 crisis, the US-China relationship has further soured. Trump administration and other western countries are not pleased with the way China had handled the virus in the initial days of its outbreak. Trump has also accused WHO of covering up China on coronavirus spread.

On 23 June, global stocks scaled after reducing initial losses on Trump's chief advisor Peter Navarro’s comment on 22 June that the business agreement between the US and China was over.

However, stocks bounced back once Trump confirmed that the deal was on, and he tweeted that hopefully, China would continue to live up to the trade agreement's terms. Later, Navarro also clarified that his comment was taken out of context.

Mixed sentiments in the US market

Wall Street is showing optimism towards the US’ ability to handle the rising COVID-19 cases. Furthermore, restrictions have been eased to resume economic activities. Early signs of recovery have helped stock prices to rise in recent weeks.

Despite, the market trying to keep itself positive, uncertainty continues amid the rising Covid-19 cases and the sensitivity of the market towards the US-China trade progress.

In Tuesday’s trading session, technology and consumer-oriented stocks drove the market, with Apple Inc. (NASDAQ:AAPL) gaining 2.13 per cent. The Dow Jones Industrial Average (DJIA) index grew by 0.50 per cent, to close at 26,156.10 points.

Gloomy predictions about more infection in the US

As per Dr Anthony Fauci, the topmost US expert on the infectious disease, the next couple of weeks would witness a disturbing increase in the COVID-19 cases in some areas of the US. He also recommended more testing for the virus detection and hinted about the possibility of vaccine to be developed by this year's end or early 2021.

ASX had a bumpy session yesterday as well, finishing at mere 0.17 per cent higher than the previous close. The market reflected a fluctuating trend on 24 June 2020, despite the gains in the global markets including Europe. The benchmark index S&P/ASX200 finished at 5965.7 points, up by 0.19 per cent.

The two best-performing stocks of the day on Australian Securities Exchange were:

The two stocks that tumbled down on ASX by the end of the trading session were:

The graph below reflects top performing stocks, as well as the ones that tumbled down on ASX, as on 24 June: 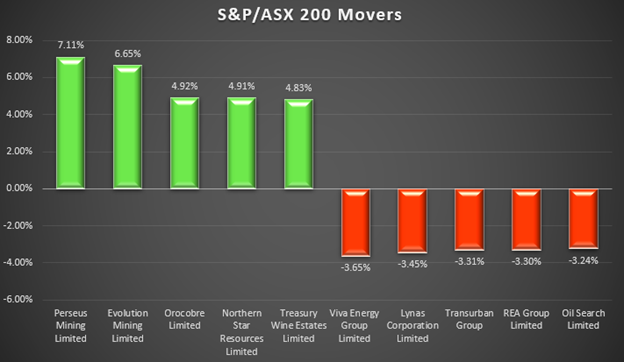 Earlier on 19 June, the Council conducted its usual three-monthly meeting and released the statement on 24 June 2020. The press release mentioned that Australian economy was experiencing the most significant economic contraction after 1930s. The good news is COVID-19 infection have been declining sharply in Australia, and this led to the re-opening of the economic activities before the period that was previously anticipated.

Furthermore, the financial market conditions in Australia and internationally have recovered through the continuing coordinated response of regulators, central banks, government, and private sector. However, the ongoing pandemic is expected to have a long-lasting impact in Australia and abroad.

The financial institutions have played one of the most significant roles in safeguarding businesses and households during the crisis and would be crucial in supporting the economic recovery.

All members of the Council have acknowledged that such support was needed to continue for the recovery phase.

The latest report by the Australian Bureau of Statistics (ABS) released on 24 June mentioned effects of the pandemic on businesses, based on recently conducted survey by ABS, which suggested that about 60 per cent of businesses sought external advice in response to COVID-19.

As per the ABS Head of Industry Statistics, John Shepherd, the external advice was mostly taken from banks, lawyers, or accountants, and from federal government agencies.

The telephonic survey  conducted by ABS (from 10 -17 June, with a sample size of 2k entities) also found that around two thirds (65 per cent) of all business have implemented new hygiene protocols and practices, and 57 per cent have made amendments to execute physical distancing. The report also includes information on the changed business revenues - two thirds of businesses reported a drop in revenue than 2019.