The company is presently focussed on advancing development of the large scale Ovoot deposit with a current Probable Reserve of 255Mt (JORC 2012 compliant). The work is currently deferred at the Nuurstei Project, which is smaller compared to Ovoot but is a potentially attractive addition to the product mix of Aspire Mining. 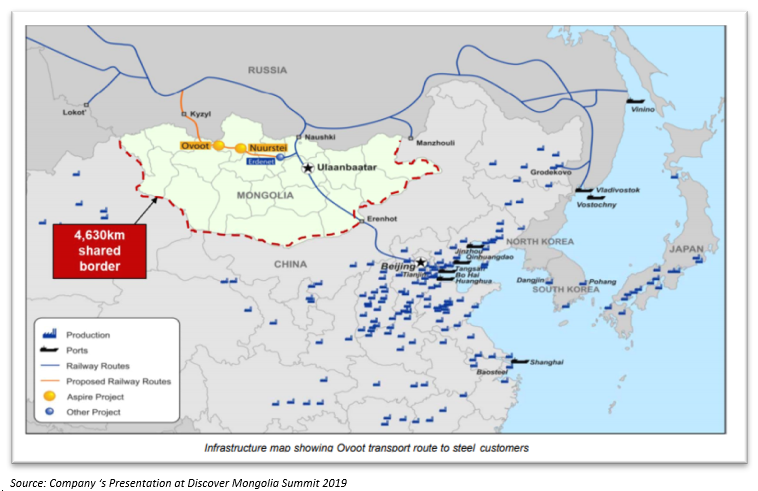 Aspire Mining is pursuing early production of washed coking coal under the Ovoot Early Development Plan (OEDP), which is first-stage of the Ovoot Project. The company has so far borne an expenditure of USD 50 million on this project including completion of a Pre-Feasibility Study (PFS) in February 2019, in collaboration with FMS LLC.

With the operational and board approvals being finalised, a truck and rail operation is being developed under the OEDP to deliver 4Mtpa to end markets within 12 to 15 months. With the completion of Erdenet-to-Ovoot Railway link, that is being supervised by Aspire Miningâs subsidiary, Northern Railways LLC, the company would expand the operations on a larger level.

The fully-funded Definitive Feasibility Study (DFS) is underway for OEDP and expected to be completed by May 2020 due to pending approvals for the Ovoot Mine and the Ovoot-to-Erdenet Road.

On 6 September 2019, Aspire Mining announced to have executed a Share Subscription Deed with its major shareholder Mr. Tserenpuntsag Tserendamba, to raise around $33.5 million (before costs) to expedite the delivery of the OEDP. Following the completion of the placement, Mr. Tserenpuntsagâs ownership in Aspire Mining would largely increase from 27.5% to 51.0% (on an undiluted basis). The placement is subject to IER and Shareholders voting in favour.

The funds raised have been indicated to be directed towards meeting the costs related to the early mine construction activities and for general working capital purposes.

Mr. Tserenpuntsag also confirmed that he would provide assistance of up to $100 million in debt and/ or project financing related to the OEDP. Mr. Tserenpuntsag was also a cornerstone investor in the companyâs $15-million financing package closed last year in December 2018.

Aspire Mining is repositioning itself as a Mongolian led development company as it moves ahead with obtaining community approvals in parallel with the OEDP DFS and associated road engineering study.

Most importantly, post Placement, Aspire Mining would be standing in the most robust financial position with an estimated cash backing of over AUD 40.0 million (based on cash in hand of AUD 10.2 million as at 30 August 2019) and zero borrowings, and the company is on a path of transforming into a key pure play coking coal producer positioned in the 2nd quartile of the global cost curve.

In conjunction with the placement, Aspire Mining also informed that its Board and key executive team would be restructured to reflect the companyâs strategic repositioning as a Mongolian majority-owned and led development company.

The key changes announced by the company include â

The company has also proposed a 10 to 1 share consolidation to reduce the its outstanding shares post the completion of the Placement.