A 42-year old IT consultant, Steven Oakes involved in using the insider information of a Melbourne -based stock tip publisher, has been sentenced to three years jail term.

Mr Oakes has been charged for gaining unauthorized access to data from Port Phillip Publishing's private computer network. He was arrested in May 2018 for illegally accessing the unpublished stock reports from the stock tip publisher. Mr Oaker would be released from prison after 18 months and would remain under a good behaviour bond for the next 18 months.

He has been pleaded guilty in court to 11 charges including wiping the information from his computer and phone before handling them to Australian Securities and Investments Commission (ASIC).

Mr Oaker used a software called Aircrack to steal the share tips given by the Port Phillip Publishing. By gaining the unauthorised access to the financial publisher’s private computer network, he obtained the buy recommendations before they were published.

He pocketed more than $220k in profits by using this information on several occasions to buy shares in different companies listed on ASX. The scam continued for four years between January 2012 and February 2016. It came to an end when the publisher upgraded its computer network security.

The financial publisher, Port Phillip Publishing has also been facing ASIC’s intervention for a while after it was accused of promoting an investment strategy that would enable retirees and would-be retirees to "piggyback" the Australian government's Future Fund on the payment of $49 subscription fee. ASIC launched proceedings on the publisher over the article promoting such strategy, alleging it to be misleading and deceptive.

However, the publisher lashed out at ASIC for targeting a small player instead of big banks and fund managers.

Let us study more about insider trading below:

What is Insider Trading?

Insider Trading is a practice of buying or selling of a publicly traded company’s securities by someone who has some material information which is not yet public. The non-public information means that the information is not legally out, and only a few people closely associated with the information possess it.

However, insider trading could either be legal or illegal, depending on the time when the trade is made by insider. It is legal if the trading is done by the corporate insiders including managers, directors, beneficial owners and employees, provided that the information used to base the trade is public. In Illegal insider trading, the trade is done using the non-public information.

In Australia, the Australian Securities and Investments Commission regulates the activities related to insider trading in the Australian market. The regulator detects, investigates and takes action on insider trading and market manipulation activities. Until 1 August 2010, the monitoring and surveillance of market participant or broker was the ASX’s responsibility. The responsibility was then passed on to ASIC from 1st August 2010. The transfer of responsibility was done to eliminate the divergent interests of ASX between its position as a listed company and the surveillance of the market on which it is listed. However, ASX carried out its surveillance role very well.

Penalties in Australia for Insider Trading

In Australia, serious penalties are levied for insider trading. The penalties differ for an individual and a company as mentioned below:

The Australian Securities and Investments Commission found a spike in suspicious trading in the ASX-listed companies from materials sector. The regulator detected some unusual market activity between 2016-19 and is now keeping an eye on companies in the materials sector.

A global food and beverage company of Australia, Retail Food Group Limited (ASX: RFG) is one of the companies that is currently being monitored by ASIC over the significant share price swings before the release of any major announcement. The ASIC has been keeping an eye on the trading in RFG shares around any significant announcement. ASIC was recently suspicious of significant share trading before company releasing the announcement of debt covenants.

A final parliamentary inquiry report into franchising released in March this year damaged the RFG’s reputation as the report recommended the regulators to keep a check on the RFG’s behaviour, raising concerns over possible insider trading, tax avoidance and breaches of market disclosure obligations in the company.

In a recent event, the company was also held responsible for sending incorrect invoices to Gloria Jeans franchisees. It was found that Retail Food Group sent invoices with inflated prices to the franchisees for the goods that have never been ordered.

RFG’s Financial Performance: The Retail Food Group reported a statutory net loss after tax of $111.1 million for the half-year ending 31 December 2018. The loss was greater than the figure of $87.8 million reported in the previous corresponding period (PCP). The company’s Underlying NPAT for 1H19 was down by 73.4 per cent relative to PCP, impacted by several factors, including prevailing negative sentiment regarding franchising. 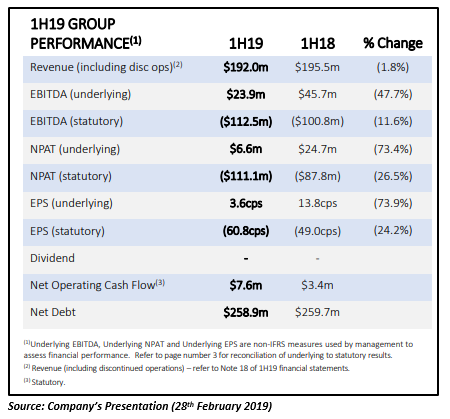 Stock Performance: RFG is trading lower on the ASX today at AUD 0.125, down by 3.85 per cent relative to the last closed price. The stock has delivered a negative return of 55.93 per cent on a YTD basis.