Aristocrat Limited is an ASX-listed gaming provider and games publisher, which offers a diverse range of products and services including electronic gaming machines, digital social games and casino management systems.

Digital Business of Aristocrat has been another key highlight, registering 37% increase in revenue and 35% growth in half-yearly bookings. The growth outlines the full period benefit of acquired Plarium and Big Fish businesses with continued strong performance across the game portfolio. Through acquisitions of Plarium and Big Fish, Aristocrat is now targeting a US$32 billion market opportunity. 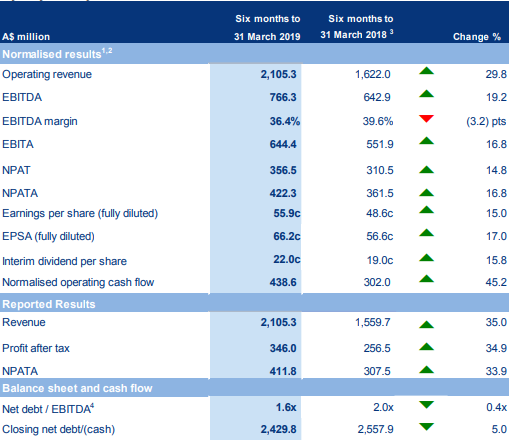 The Directors have authorised an interim fully franked dividend of 22.0 cents per share, up 16%, in respect to the six months ended 31 March 2019. The record and payment dates for the interim dividend are 30 May 2019 and 2 July 2019, respectively.

Aristocrat is in the process of implementing changes in the Group structure, which is expected to result in reductions in foreign cash tax paid and book tax expense from FY20 onwards. Effective tax rate (ETR) expected to reduce by 150 to 250 bps compared to the FY19 ETR, as per the report.

Tax amendments underscore Aristocrat’s US market share, which forms the majority of Group’s revenue. However, despite the change, Aristocrat would continue to remain Australian tax resident and pay taxes in Australia.

User Acquisition or UA spend is expected to remain at around 25% to 28% of overall Digital revenues, with the higher relative spend reflective of the increased number of game releases planned for FY19.

The company expects to achieve a further 100 - 150bps reduction in the Group’s effective tax rate over FY18.

CLICK HERE FOR YOUR FREE REPORT!
Tags:
consumer ALL