Good news has turned down the bearish trends to let the bulls take over the battlefield after a long meltdown in the Australian market. On Thursday, there have been two major developments in global news that led to the positive market sentiments on stock exchange all across the world. These two news pieces include the withdrawal of extradition bill in Hong Kong and a news that the United States and China will resume trade talks in October, which sends positive trade vibes across the globe.

Nanosonics Limited, globally known for its infection prevention technology in the healthcare industry, has today been one of the best bet on Australian Securities Exchange as its stock price surged up 7.458% to close at $7.060 on Thursday, 05 September 2019.

The upswing in market trend follows the early morning release of Annual Report where the company declared 39% growth in yearly sales to $84.3 million for the 12 months ended 30 June 2019, with an outstanding response to the launch of its next generation trophonÂ® 2 technology. 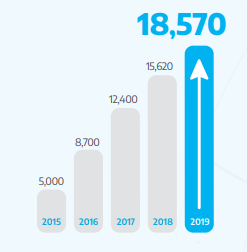 During FY19, trophon was continued to be adopted as the new standard-of-care with the installed base growing by 19%, increasing from 15,620 units to 18,570 units. This represents 46% of the estimated market potential of 40,000 units.

The company informed that following the successful trophon2 launch in Q1 FY19 in the European, North American and Australian market, the trophon device is now installed in over 5,000 hospitals and clinics, including the top 100 US hospitals. As per the report, Trophon adoption grew 25% in Europe/Middle East alone, driven by the Managed Equipment Services business model and the direct sales.

Moreover, every day over 57,000 patients in North America are protected from the risk of cross-contamination by trophon technology, a number that is increasing daily, as reported by the company. 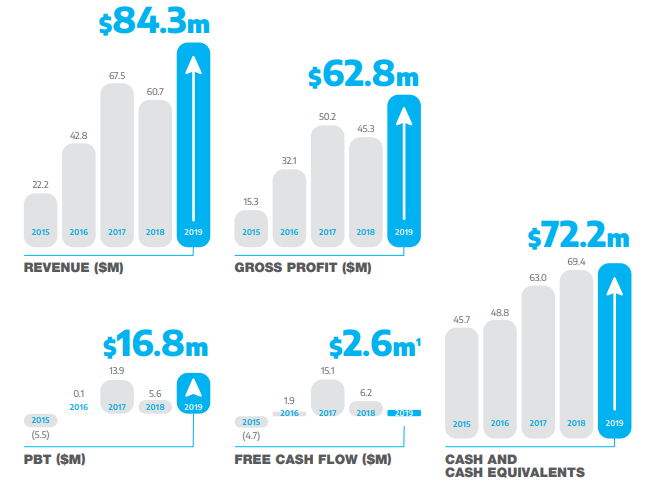 Total sales for the year were $84.3 million, up 39% on prior corresponding period. These sales reflect capital revenue of $32.8 million which was up 28% on prior corresponding period and revenue associated with consumables and service of $51.5 million which was up 47% on FY2018 reflecting the continuing strong growth in the installed base which supports the important annuity revenue profile of the business. The groupâs FY19 profit after tax amounted to $13.6 million compared to FY18â $5.7 million.

The strategic growth agenda for Nanosonics includes expanding the adoption of trophonÂ® in those markets where trophon is already represented, expanding global presence and expanding the product portfolio through significant investment in research and development to bring new infection prevention products to market.

In the current scenario, the stock is trading at its record levels near to its 52-week high of $7.10 with a price to earnings multiple of 144.710. The company has a market capitalisation of $1.97 billion.

Over the past 12 months, the stock has gone up by 89.34% including a positive price change of an attractive 57.18% in the last three months.

Traders got touchy to the investment management group when market had some cooling breezes after a long meltdown! The bullish market sentiments took the Pinnacle stock price up 7.143% to close at $4.50 on 5 September 2019.

The stock maintained a decent record of 8.53% in a last one month, with the latest price to earnings multiple of 22.930 x and a market capitalisation of $768.05 million.

Pinnacle is focused on investing, on the growth of retail Funds Under Management (FUM), to enable continued strong performance, and continue to access third-party distribution and new boutique opportunities. Coming to the numbers, Pinnacle continued its strong growth in the 2019 financial year NPAT from continuing operations up 32% to $30.5 million compared to FY2018; which represented basic earnings per share of 18.3 cents, up 28% from the 2018 financial year. This was underpinned by a 32.9% increase to $33.1 million in Pinnacleâs share of net profits from the Pinnacle Affiliates. 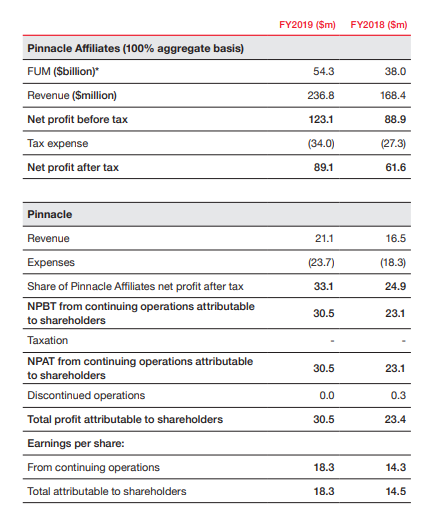 Group FUM increased 43% to $54.3 billion at the end of the year (an increase of 25% if the âacquiredâ FUM is excluded). This âacquiredâ FUM includes $6.8 billion takeover in the Metrics and Omega transactions in July 2018.Net funds inflows totalled $6.5 billion, including $2.9 billion of retail net inflows.

The Board has declared a fully franked final dividend of 9.3 cents per share payable on 4 October 2019.

Information Technology company Nearmap Ltd also joined the market rally, with the stock price up 3.089 in a day trade to close the session at $2.670 on 5 September 2019.

Nearmapâs portfolio increased $24 million to $90.2 million during the financial year ended 30 June 2019 and 36% growth year-on-year. As explained by the company, this growth was majorly contributed by new customers which included $17.4 million new subscribers to Nearmap, a 40% increase on FY18, and the other key highlight of this growth being the low churning, which stood at $3.5 million in FY19, lower than FY18. As a %of ACV, twelve month rolling churn has fallen to 5.3% from 7.5% of the Group portfolio.

The company further continues to invest in n machine learning and has launched a beta release of its Artificial Intelligence content in 2H FY19. Its highly accurate machine learning models reportedly have the potential to turn the companyâs millions of aerial images, captured multiple times a year, into valuable datasets.