Are all Airline Stocks in a dumping zone post Warren Buffet's take on the Sector?

The industry that bears the burden of spreading coronavirus all over the world- Airline industry has been one of the worst hit sectors due to worldwide Covid-19 induced lockdowns. There has been a massive reduction in air travel and the number of flights scheduled globally as countries imposed travel restrictions to stop the virus spread with more than 16,000 of the world’s aircraft being grounded.

Recently, Warren Buffet during his annual address to its shareholders revealed that his Berkshire Hathaway conglomerate has sold its roughly 10% stake in all the four air carriers namely American Airlines, Delta, United and Southwest airlines in April.

Buffet had spent years agonising over airline investing when he made an investment worth $358 million in US Airways in 1989. His company, Berkshire began investing into aviation in 2016 revealing a surprise bet on the industry. Years of strengthening through mergers after going bankrupt and a fall in fuel prices have supported the industry in making record profits.

As per Buffett, Berkshire have had spent $7-8 billion since 2016 to buy 10% of the four airlines but ended up selling at far lower prices. The selling decision came as he did not expect full recovery in passenger numbers from coronavirus pandemic in the coming years. He also feared that too many planes will drive the seat prices down and hurt aviation earnings.

American Airlines Group dropped 7.7%, Delta Airlines slid 6.4%, Southwest Airlines slumped 5.7% while United Airlines had shed 5.1% on 4 May after Buffett sold his stake in the 4 carriers.

Australian aviation sector has witnessed the worst crisis ever with grounded fleet, falling revenues, massive paycuts and job losses due to travel bans imposed by the government amid COVID-19 outbreak. The sector is going through real tough times and struggling to sustain themselves.

Qantas Airways Limited (ASX:QAN) in its market update on 5 May stated that the airlines had raised enough funding to last till the end of December 2021 enhancing its shares. Also, the Australian carrier mentioned that it had gained an additional $550 million in debt funding against 3 of its fully owned Boeing 787-9 planes.

The Group’s net debt is now within the middle of the target range at $5.8 billion and stated that it could raise another $2.7 billion from other aircraft assets as per the need. It has stopped most domestic flights until June end and international flights till the end of July. 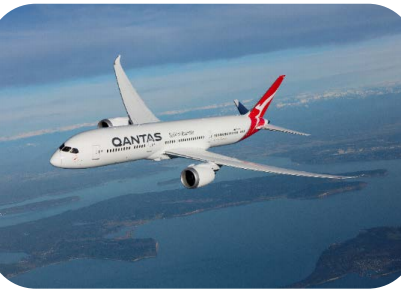 Recently, Alan Joyce, Qantas CEO stated, “The Group is well positioned to drive the storm out and be a part of recovery when it comes. As Australia has flattened the coronavirus curve, hopes of travel demand have revived back.”

He said full recovery in international travel except New Zealand could take years triggering a review of airline’s fleet. He has abandoned plans to order up to 12 Airbus SE A-350 planes and has planned to keep 12 A380s grounded till there is any recovery. He added that the Group has a strong financial position with the ability to scale up quickly in case of any return in the demand. Qantas has forecasted a net cash burn rate of $40 million per week by June end.

Travel bubble between AU and NZ

Also, Australia and New Zealand are planning a corridor to allow people to travel from both the nations. This could prove as a huge advantage for both the countries that have come out strongly in containing the virus.

The Australian and New Zealand government are planning on a “trans-Tasman travel bubble” The arrangement has been driven by the economic necessity as both the economies tanked under tight restrictions with looming recession. Opening up borders would allow significant trade and visitors between the 2 countries.

ALSO READ: Would the travel industry be the same post COVID-19?

Qantas CEO stated that it is a welcome move and can be established as a model to open the economy gradually for international travel when COVID-19 is controlled by other countries around the world. AU and NZ are the largest sources of tourists for each other.”

Chris Roberts, Chief of New Zealand’s tourist board stated that if AU and NZ can work out this arrangement, it can be adopted elsewhere. NZ also wishes to establish links with Taiwan, Hong Kong, China and South Korea which are doing well in containing the virus.

The plan is expected to work well as economies of the two countries are deeply integrated and have a history of co-operation. However, contact tracing will be more difficult once this move comes into effect and if cases emerge, both the countries might have to enter lockdown again.

As per a survey by Qantas Frequent Flyers, 85% of the people will be keen to travel as soon as restrictions are lifted.

Many people would be eager to travel to different places once the lockdown ends which is important for the industry to survive. However, post lockdown and once the virus is contained, the sector will take few years to recover. Airlines will have to make extra efforts to promote growth and get sufficient cash flows for the revenue starved industry.