The presentation provides exposure to innovative technologies. It also mentioned about AXEâS 12CQ Project, which is being led by Global pioneers in nanotechnology and quantum computing.

12CQ is the first quantum technology project of the company that could make quantum computing possible to operate the current consumer electronic devices. Most of the quantum computers work at sub-zero temperatures, which is not very practical. Others utilize light or special materials in order to overcome the temperature related challenges and are tough to integrate into modern electronics. Also, 12CQ chip gives a potential answer to unite these above-mentioned challenges.

Once the AXEâs 12CQ chip is successfully developed, it could enable widespread ownership of quantum computing powered technology. This chip would provide world-record room-temperature qubit stability, as the company is using the only reported conducting material, which is capable of stable and robust quantum information processing at room temperature. To develop current qubit chip, cryogenic temperatures, well-defined crystals, atomic manipulation, or the use of metals will not be required. This chip will form the most important component of a universal quantum computer that will function under practical conditions.

The successful commercialization of the 12CQ chip technology would be able to catalyze a global multibillion-dollar industry. As per the companyâs forecast, the size of the quantum computing industry in 2022 will be around $30 billion. The global semiconductor industry revenue would be ~$715 billion. Also, 70% of the production of semiconductor will be in Asia. 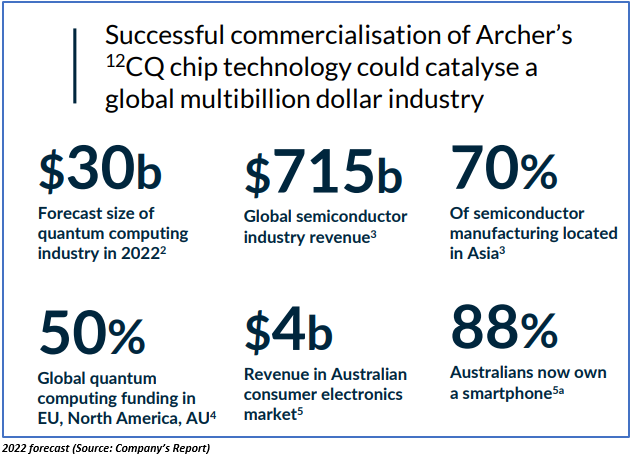 The company has exclusive global rights to develop as well as commercialize breakthrough quantum computing technology. The Globally registered patents are exclusively licensed by the University of Sydney to the company.

The company also provided 12CQâs commercial pathway. In 2012, 12CQâs qubit material was invented and by April 2019, the company signed Access Agreements to build the 12CQ processor prototypes at the Sydney Nanoscience hub.

The purpose behind using Quantum Computers is to apply Quantum Algorithms software, which offers considerable speed-ups in processing, compared to classical computers, and the prospect to solve the issues that classical computers find highly tough or impossible.

In next 12 to 18 months, the company would be building a commercial prototype qubit processor chip to advance from a TRL of 2 towards 4 by combining the functional components of the chip at the Sydney Nanoscience Hub. It would also be establishing commercial partnerships with highly resourced organizations that would provide the company with an opportunity for product scale, knowledge and technology transfer, integration as well as product distribution. Further, AXE would be stepping ahead to grow its global presence. For this, the company would continue to apply for patents in Australian, the US, EU, China, Japan, Republic of Korea, and Hong Kong region, which would allow the company the commercial liberty to function in these above-mentioned markets in different regions.