Undoubtedly, the growing population is driving demand for food across the world. Inensification of agriculture required to satisfy this increased demand further depends on fertilisers for improving the productivity. Tapping the emerging opportunity is an Australian headquartered feedstock explorer- Parkway Minerals NL (ASX: PWN) that is catering to this growing need of fertilisers by focusing on the sustainable production of fertiliser minerals.

The company has created a portfolio of high-quality resource projects that are ideally suited for potential development via either the K-Max® or aMES™ (activated Mineral Extraction System) technology, in case a proper feasibility-study endorse a commercial-scale development.

The September quarter was a revolutionary quarter for Parkway in 2019 as the company achieved a significant milestone via the acquisition of 98.83 per cent interest in Consolidated Potash Corporation (CPC).

The company has recently released its quarterly report for the period ended 30th September 2019 on the ASX, that highlighted the following developments:

The acquisition represented a transformative transaction for the company that enabled it to acquire a 100 per cent interest in the aMES™ brine-processing technology and earn equity interests in CPC’s two strategic brine projects – KLPP (15% interest, earning 40%) and NMLP (70% interest, earning 100%).

The company also raised $450,000 during the quarter to fund the CPC transaction and working capital requirements, issuing 90 million shares at $0.005.

Several brine project developers and operators have validated the potential of aMES™ technology to deliver substantial value and improve the overall performance of the project.

With aMES™ technology, the concentrated brine solutions can be treated to retrieve valuable minerals and fresh water. The technology has the following advantages: 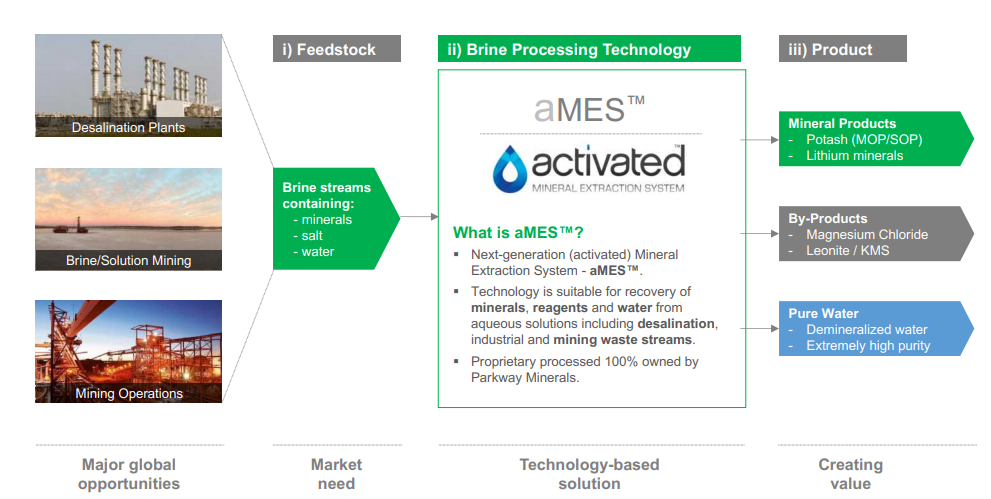 CPC is assessing the prospective suitability of the aMES™ to be implemented to existing lithium and potash brine operations to enhance product recovery and quality, along with reducing fresh-water consumption.

Parkway initially has 15 per cent interest in Karinga Lakes Potash Project, a Joint Venture with Verdant Minerals, with the right to acquire up to 40 per cent interest through a staged investment of additional $2 million. CPC delivered a successful scoping study to Verdant Minerals in February 2019, under which the potential development of KLPP based on the aMES™ technology was investigated.

Parkway is working with the JV to identify the suitable opportunity to finalise a Preliminary Feasibility Study (PFS) for KLPP based on the strategic application of the aMES™ technology. The KLPP-PFS is likely to assist in aMES™ roll-out and further demonstrate the advantages of the technology.

Parkway has gained a 70 per cent interest in NMLP post acquisition, with the right to move to 100 per cent ownership. The project displays important geological components, including:

At present, the company is engaged in the evaluation of multiple opportunities to drill-test NMLP, including an alliance with potential third parties.

Grant of Retention Status to the Dinner Hill Project 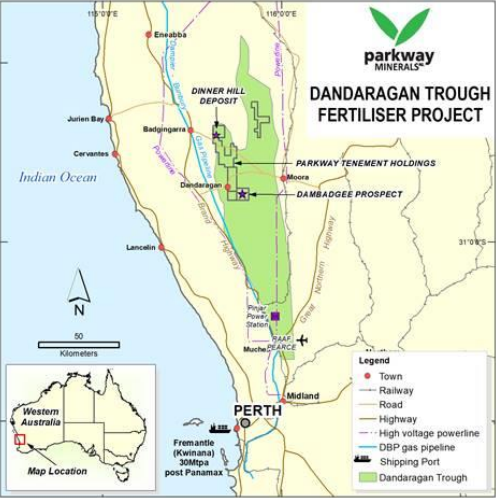 Parkway notified that a retention status was given to the Dinner Hill Project during the quarter, permitting the company to progress with its development plans with marginal holding costs. The company is exploring metallurgical process optimisation opportunities at DTP while embarking on potential JV partner engagement.

Parkway also holds 34.3 million shares (21% interest) in Davenport, whose South Harz Project has a total Inferred Resource of 4.9 billion tonnes @ 10.6% K2O, comprising 1.6 billion tonnes of sylvinite @ 13.1% K2O. The company has completed the economic and technical studies on many potential opportunities within the existing project portfolio, which will form the basis of strategic partner discussions.

Parkway reported a cash balance of $0.33 million and liquid assets of $0.25 million as at 30th September 2019. The company has estimated a total cash outflow of 0.21 million for the next quarter.