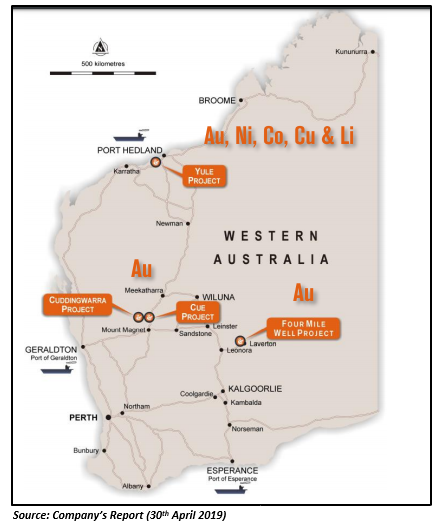 Let us know more about these projects in some detail:

The Yule Project has the potential for gold, base metals and lithium, and is situated between 35km and 65km southwest of Port Hedland in the Western Australia’s Northern Pilbara region. Three exploration licences have been granted to Yule Project for a total of 434 sq. km, that includes the Yule South tenements (E47/3507 and E47/3503) and the Yule North tenement (E47/3508). 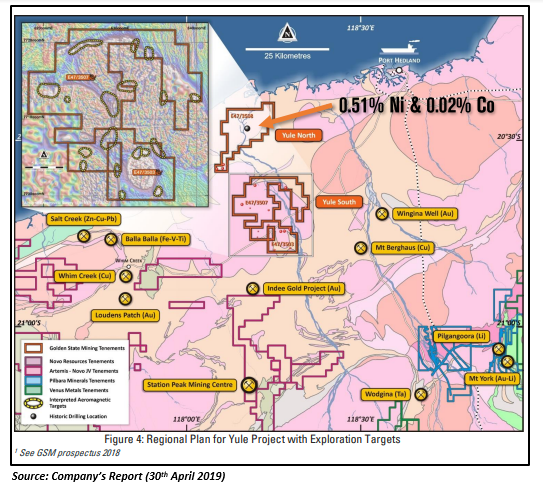 Yule North tenement E47/3508: A recent petrographic study results have confirmed the potential of remobilised Nickel (Ni) and Nickel-cobalt (Ni-Co) minerals in addition to copper sulphides at Yule North Project. The study has also detected a pegmatite confirming the lithium target potential of the project.

Yule South tenement (E47/3503 and E47/3507): Potential targets were previously identified from airborne geophysics at Yule South Project which have never been followed up or drill tested.

GSM’s cornerstone project is its Cue Project, located adjacent to the historical town of Cue in the Murchison district and comprising of 175km2 of tenements including Cuddingwarra and Big Bell South. The Cue project is a proven gold region that has produced over 7 million ounces of gold in the past 126 years. The largest mine under the Cue project was the Queen of the May/Light of Asia that produced 35,000 tonnes for 30,000 ounces of gold between the years 1911 and 1923. 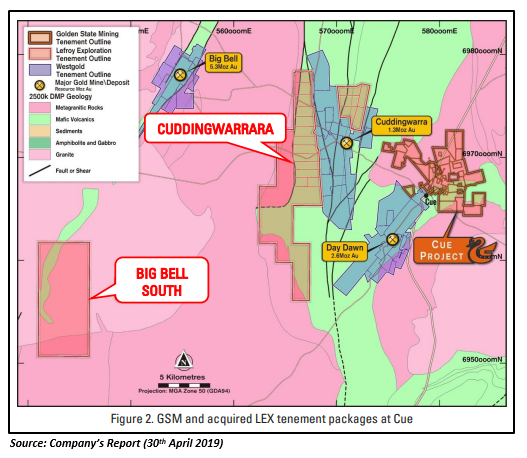 The company completed the acquisition of regionally significant Murchison Project (including the Cuddingwarra and Big Bell South tenement) in January 2019. The new tenements - Cuddingwarra and Big Bell South are considered as a positive ‘Greenfields’ exploration ground. A new mineralised zone was also identified in January this year at around 500m along strike to the north of Light of Asia mine whose best intercepts include 3m @ 20.1 g/t including 1m @ 56.6 g/t Au.

Cuddingwarra Project: Twelve priority gold targets have been generated under a new targeting study that got completed at Cuddingwarra. The drill planning and logistics are expected to commence in Q3 of the 2019 field season.

Located at 9 km to the north of the Laverton townsite in the Eastern Goldfields, the Four Mile Well Project includes a single 38 block exploration licence (approximately 107 sq. km).

The region near the Four Mile Well Project area is highly mineralised with substantial amount of nickel and gold deposits. A number of geochemical gold anomalies have been detected in the previous work which will be followed-up with closer spaced geochemical sampling. 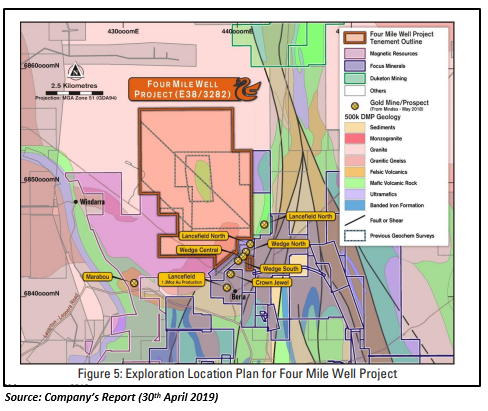 The company has planned the following activities for the June quarter 2019: