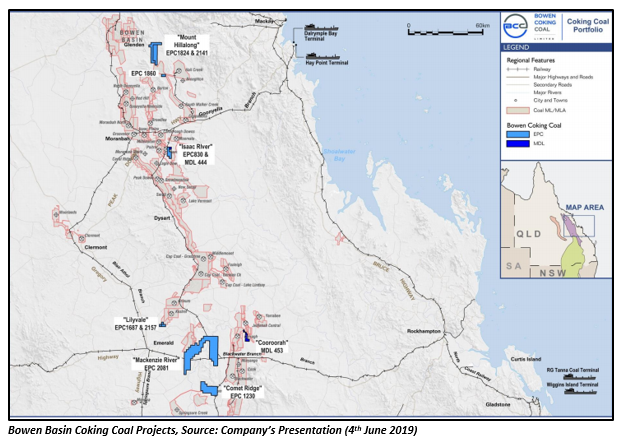 Let us have a look at the brief description of the company’s projects and their respective updates mentioned in the recently released Investor Presentation:

Covering an area of 14km2, the project is located in the Bowen Basin in Central Queensland – around 130 km southwest of Mackay and 30 km west of Moranbah. It is situated at east of Daunia Mine and abutting Peabody’s Moorvale West and Gundyer Projects. 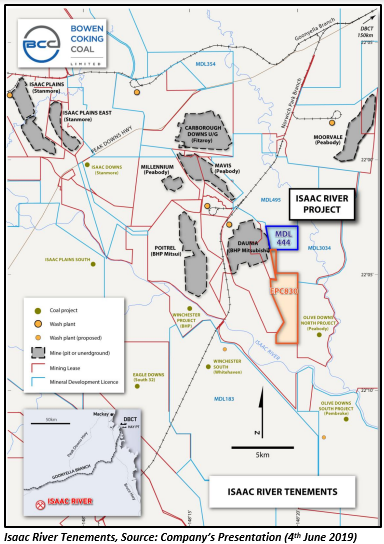 The maiden JORC Resource estimate for the Leichhardt seam is estimated at 5.3Mt, of which 4.2Mt is Indicated, and 1.1Mt is Inferred. It has an average thickness of 4.7m across the Project, with potential for SHCC and secondary thermal coal or single PCI (Pulverized Coal Injection) product.

The company’s historical focus for the Leichhardt seam was on a semi-soft coking coal with secondary thermal coal for a combined yield of 87%. However, the mineral resources defined a high yielding PCI option or potential for a semi-hard coking coal with secondary thermal option. The recent analysis has found that some core samples were subject to a substantial delay (some up to 14 months) before completing the analysis, which could have an impact on coking properties.

The fresh samples have been recently obtained, and the analysis is underway. Also, the expansion and the low-cost development options are under investigation.

The Vermont Upper seam regionally known for its good coking properties, was found by BCB in 2019 from 25m deep and 2.2 to 3.5m thickness. It has been encountered in 7 historical holes, with average seam thickness of 2.7 metres. The exploration program has been successfully completed and intersected all target seams, including the thick Girrah seam from sub-crop, identified as a Stage 3 target.

The coal quality, JORC Resource and Scoping Study updates to potentially include the Vermont Upper seam are currently underway. Apart from this, the activities like environmental studies and preparation for Mining License Application, the commencement of the Regional Infrastructure discussions and Scoping the PFS are also in progress.

Located between Coronado Global Resources’ (ASX: CRN) Curragh mine in the West and Jellinbah Mine in the East, the project targets the popular Rangal measures and hosts the Castor, Aries, Pisces and Pollux seams. The company’s drilling program results at the project revealed the extension of the Pollux and Mammoth seams into the Northern region of the tenement.

Cooroorah Project has a potential for large scale underground coal mine producing HCC, with secondary PCI, or alternatively low volatile, unwashed PCI. It is situated close to the infrastructure and distribution options, having potential synergies with neighbouring mines.

The JORC Resource upgrade has been completed to the mineral estimate of 177Mt, of which 96Mt (54 per cent) is in the Indicated category and 81Mt (46 per cent) in the Inferred one.

Mammoth seam has some of the highest Metallurgical coal yields and lowest ash coking coal in the Bowen basin. It has a potential for 8-9 CSN Coking coal, a 3.5 per cent ash with secondary 10 per cent ash 7560K/kcal/kg PCI for a combined lab yield of over 90% (ad). It is now estimated to be a total of 60Mt, of which 22Mt is Inferred and 38Mt is Indicated. Also, the analysis to date suggests exceptional coking coal quality for the Mammoth seam, confirming very high-quality coking coal with secondary Pulverized Coal Injection product for a combined yield of more than 90 per cent. 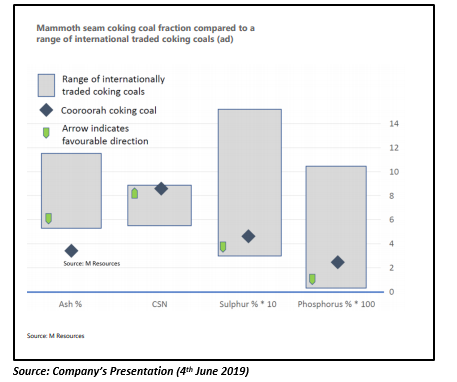 BCB acquired Mt Hillalong (EPC 1824) from Australian Pacific Coal (ASX: AQC) in late 2017, and Hillalong East (EPC2141) from Rio Tinto in May 2018. Mt Hillalong is situated in the northern Bowen Basin - around 105 km west-southwest of Mackay. 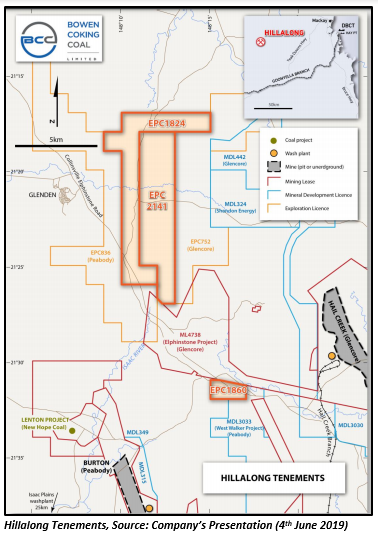 The historical drilling and analysis demonstrated good quality coking coal at the project. The project included multiple intersections of 3m+ thick seams and some shallow intersections at circa 25m to 40m.

A significant amount of data has been generated from historic drilling, but there are no valid data points of observation for JORC. A DRAFT Program has been designed with Xstract and Xenith to maximise coverage and definition.

The exploration target has been defined ranging between 61Mt and 409Mt for both Open pit and Underground in the Rangal and Moranbah Measures. The maiden drilling program at Hillalong is anticipated to commence in 3rd or 4th quarter of calendar 2019.

The table below shows the Exploration Target estimate for the Mt Hillalong Project (EPC2141 and EPC1824):

Currently, the company’s focus is on the Northern area for potential shallow Elphinstone (Leichhardt equivalent) and Hynds (Vermont equivalent) seam open cut around Rio holes HILL 005 and HILL 008. For the Exploration program, the Access Agreements are under negotiation, and the Cultural Heritage Clearance will commence after Access Agreements.

The Comet Ridge project located at 60km East of Emerald and 25km South of the township of Comet was acquired by BCC from Acacia Coal Limited. An open pit project, Comet Ridge has a JORC resource of 60 million tonnes shallower than 50 metres. BCC is focussing on the stratigraphically lower Triumph seam and the Fair Hill seam for producing coking coal with secondary thermal coal.

The project comprises of tenement EPC 1230 and MLA 700005. In March 2015, an application was submitted to the Queensland Department of Natural Resources and Mines for a mining lease (MLA 700005), which has not yet been granted by the Queensland Government. 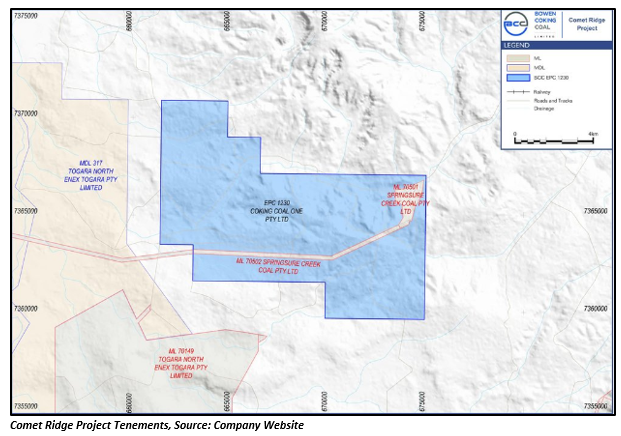 Approximately 7.5 million dollars have been spent on the exploration activities by the previous owners. The quality assessments demonstrate high CSN coking coal, a low ash along with secondary thermal coal.

The projects under the joint venture partnership of the company with Stanmore Coal Limited includes Lilyvale Joint Venture and Mackenzie Joint Venture.

BCC holds 15 per cent interest in the Lilyvale project that is situated at the 25 km north-east of Emerald in the Queensland’s Bowen basin. The German Creek seam identified under the project has Inferred JORC Resource estimate of 33Mt. The two holes in tenement show high yielding coking coal (more than 85% yield) from the 2.4 metres thick German Creek seam, with the quality correlating to Kestrel mine. 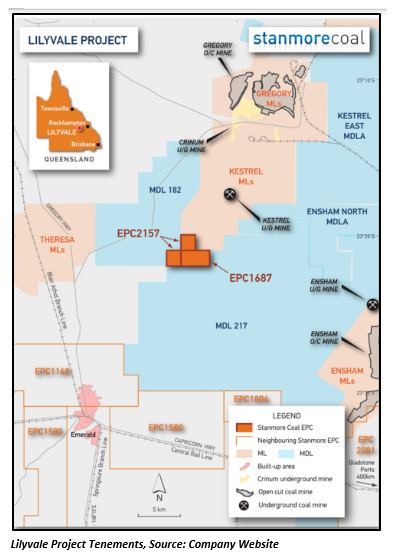 The Mackenzie Coking Coal Project is located between the Curragh and Ensham operating mines in the Bowen Basin. In 2012, a review of the Mackenzie deposit resulted in the definition of 143.2mt Resource (25.7mt Indicated + 117.5mt Inferred) following the JORC (2004). The Resource has not been upgraded to be in accordance with JORC 2012. 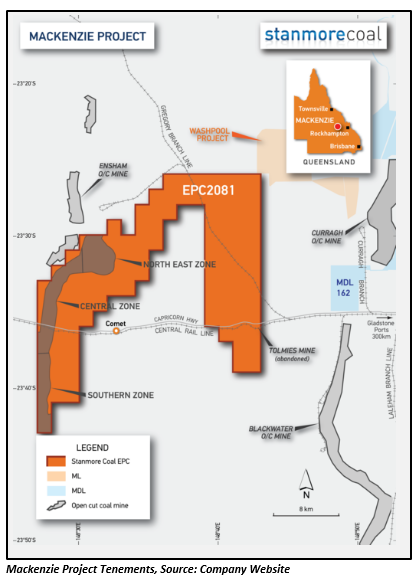 Stock Performance: The stock of the company closed at AUD 0.031 (11th June 2019), up by 3.33 per cent relative to the last close. Today’s close also marks a new 52-week high price for the stock. This comes on the back of the stock performing extremely well in the past one year with the share price doubling in value. Furthermore, the stock has delivered an impressive YTD return of 50 per cent.