Appen Limited (ASX: APX) belongs to the Information Technology sector and is a global company as well as a leader in high-quality, human-annotated datasets for machine learning and AI.

Appen has deep expertise in more than one hundred and eighty languages and dialects with more than twenty years of experience in data annotation, collection, assessment along with a transcription. The company has access to more than 1,000,000 skilled contractors across the world.

Recently, on 29 April 2019, the company released its Annual Report for FY2018. During the period, which ended on 31 December 2018, there was an increase in the revenue of the company by 119% to $364.3 million as compared to the previous corresponding period. The EBIDTA was up by 153% to $71.3 million. The company made a net profit of $49 million. The company declared a dividend of 4 cents per share. 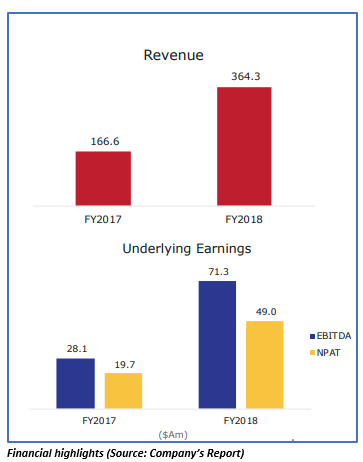 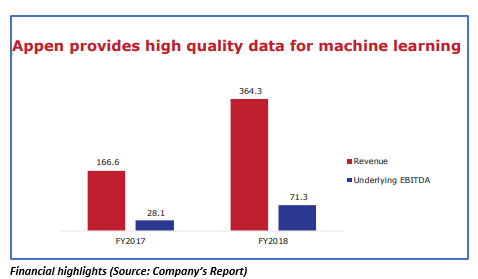 The balance sheet of the company witnessed a significant increase in the net asset base due to the rise in the total asset of the company. The total shareholders’ equity for the period was $139.400 million.

In FY2018, there was a significant increase in the cash inflow from $13.384 million in FY2018 to $46.799 million in FY2018 as a result of an increase in the receipts from the customers, including GST. There was a net cash outflow of $7.596 million from the investing activities of the company. The primary drivers of cash outflow were due to the payment made for acquisition along with the transaction cost, Payments for property, plant and equipment, Payments for intangibles.

There was a net cash outflow of $25.229 million from the financing activities of the company. The primary drivers of cash outflow were through the repayment of borrowing as well as payment of dividend. The net cash and cash equivalent by the end of the FY2018 were $40.045 million.

Also, there was an ASX announcement provided by the APX, which highlighted a change of company’s Director’s Interest Notice. Ms Deena Shiff who had an indirect interest in Qua Investment Pty Ltd and was holding 50,229 ordinary shares of APX acquired another 203 shares at $21.50 per share, effective 10 April 2019. She now holds a total of 50,432 shares.

On 11 March 2019, APX notified to the market that it has entered into a binding agreement to procure Figure Eight Technologies, Inc. and the acquisition was concluded on 3 April 2019. The Technology platform of Figure Eight is a machine learning software platform, and its ‘Human-in-the-Loop’ platform helps in transforming unstructured text, image, audio, and so forth.

Previously, on 8 February 2019, the company announced the resignation of Ms Leanne Ralph as Company Secretary and her position was taken up by Mr Carl Middlehurst.