A.P. Eagers Limited To Sell Its Newstead Property For $61 Million

A pure automotive retail group, A.P. Eagers Limited (ASX: APE) is in the process of selling its property situated at 99 Breakfast Creek Road, Newstead in Brisbane, to the Seymour Group for a total consideration of $61 million.

In an announcement made on 28 June 2019, the company highlighted that it has entered into an unconditional contract with the Seymour Group for sale of its Newstead property, in line with the company’s approach of managing its property portfolio. Further, this sale is underpinning the company’s strategic move to the world-class Auto Mall planned for Brisbane Airport.

It is expected that the sale will take place on 26th August 2019 and it will generate a profit before tax of $26.1 million, recognised over the seven-year lease term, with an annual profit contribution of $3.7 million.

Once the settlement is completed, the company will keep on operating its businesses from the property as it has entered into a seven-year lease-back.

Combined with the recent sale in Newstead, the proceeds from this sale generated $24.0 million in profit before tax, which has considerably strengthened the company’s balance sheet. Further, it is expected that the sales together will provide an aggregate cash contribution of $116.6 million and an aggregate $50.1 million profit over the next seven years.

As at 26th June 2019, the company will continue to hold a substantial portfolio of owned property valued at $280.0 million.

Today, on 28 June 2019, A.P. Eagers Limited has released a Fifth Supplementary Bidder’s Statement in relation to its offer to acquire all of the ordinary shares in Automotive Holdings Group Limited (ASX: AHG) for 1 APE Share for every 3.6 AHG Shares.

In the statement, it has been communicated that AHG Board is unanimously recommending its shareholders to accept the APE Offer in the absence of a superior proposal. Further, the Board has requested shareholders to accept the Offer once A.P. Eagers waives a no Material Adverse Change Bid condition. Accordingly, the offer will close at 7.00pm (Sydney time) on 16 September 2019, unless extended or withdrawn.

Earlier on 24th June 2019, APE pointed out ACCC views on the proposed merger, wherein ACCC advised that it is very unlikely that the proposed merger between APE and AHG will substantially decrease competition for the supply of new cars in Melbourne, Sydney and Brisbane or nationally.

The company believes that the combination of these two highly complementary businesses with a diversified portfolio of motor vehicle dealerships and greater financial scale will be better placed to respond to the rapidly evolving motor vehicle retailing market and to pursue future growth opportunities through the cycles. The Merged Group would be represented in each State and Territory of Australia (other than the Australian Capital Territory) and in New Zealand, and would be a clear market leader in automotive retail in Australasia. The Merged Group would also be expected to have a market share of approximately 11.9% of the Australian new vehicles sales market.

Despite challenging trading conditions in 2018, the company was able to significantly outperform the automotive retail sector and delivered a robust full year financial performance. In 2018, the company’s total revenues increased by 1.3% to $4.1 billion. On a like-for-like basis, 2018 revenues increased by 2.1% compared to 2017, underpinned by strong trading in the Queensland (excluding discontinued businesses), Victorian and South Australian car divisions.

Combined with a record performance in the National Truck division, the company was able to achieve modest revenue growth and mitigate difficult trading environments in New South Wales and Tasmania. Through a disciplined approach of generating higher returns across its asset base in 2018, the company reported a net profit after tax of $101.2 million, which is 3.1% higher than the previous year. The company’s earnings per share for the year were 52.0 cents compared to 50.3 cents for the prior period, an increase of 3.4%. This improved full year operating performance helped the company in offsetting reduced dividend income from its strategic investment in AHG and reduced gains on the sale of non-core operations and property. 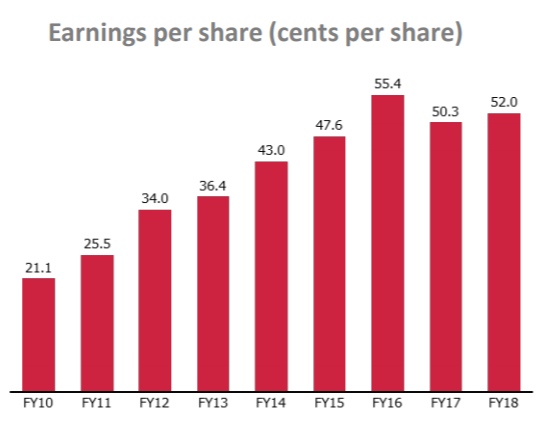 Automotive Holdings Group Limited (ASX: AHG) is Australasia’s leading automotive retail group, representing seven manufacturers, including all of the top 14 selling passenger brands in Australia. AHG is one of the largest new vehicle retailers in Australasia, with a network of strong brands in strategic locations. The company is also the largest scale player in Australia in integrated temperature?controlled transport and cold storage with a solid pipeline of business development. The company believes that it is very well placed to become a market leader in used car sales through its investment in the easyauto123 business.

AHG Trading Update: Based on the trading performance for the 10 months ended April 2019 and current market conditions, AHG expects its FY2019 operating NPAT to be around $50 million, lesser than its earlier guidance of $52 million to $56 million provided in February 2019, reflecting the challenging conditions in franchised automotive retail volumes and margins, as well as weaker than expected April performance in AHG's Refrigerated Logistics division on the back of subdued Easter trading. 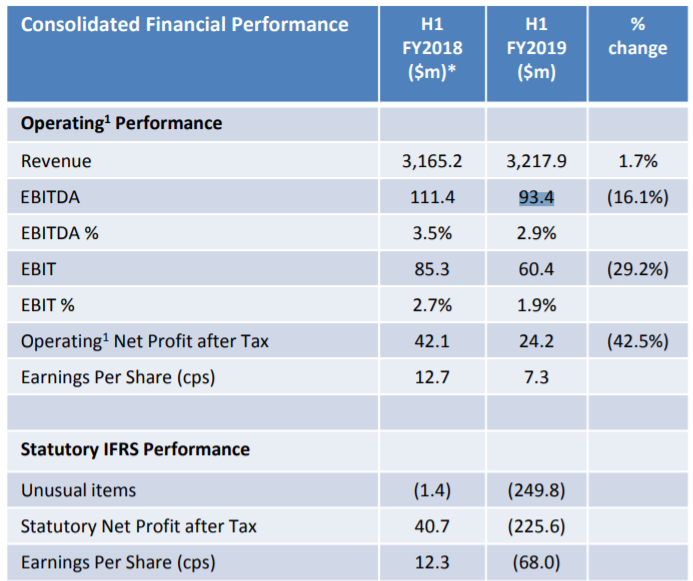