Perth-based Lithium Australia NL (ASX: LIT) engaged in the extraction, acquisition, recovery and development of lithium deposits, recently disclosed its Quarterly Activities Report for September 2019 as the company continues to aim for closing the loop on the energy-metal cycle in a sustainable way and envisions for enabling a circular battery economy. 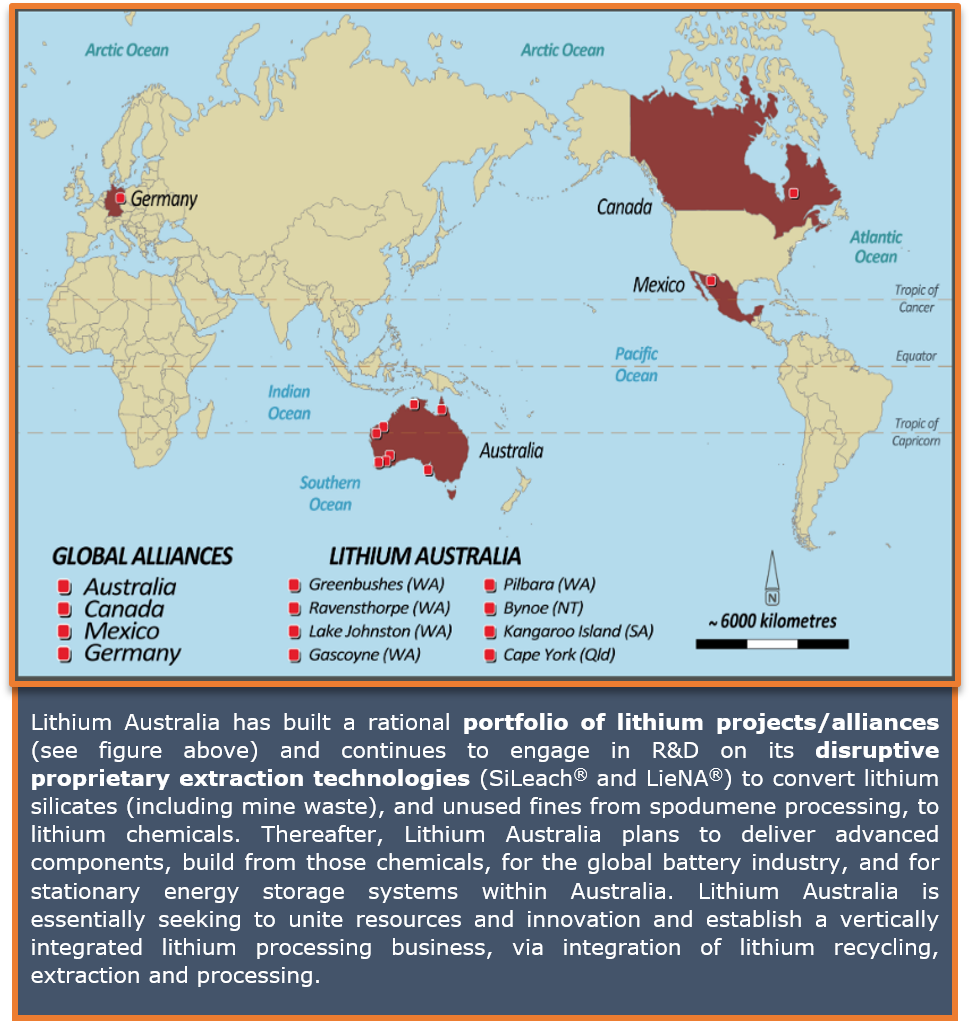 Some of the Key Highlights from the company’s last quarter are discussed below.

Lithium Australia increased its equity stake to 23.9% in Victoria-based Envirostream, which operates the only national facility to shred spent batteries including lithium-ion batteries (LIBs), followed by production of a mixed-metal dust (MMD) that is currently exported to South Korea for further refining.

Envirostream added an additional 50 collection points to its existing ones, supported by its partnerships with LG Chem and the Milwaukee Electric Tool Corporation, among others. The company’s processing capacity has been further supplemented by its partnership with LIT.

A plant upgrade to a design capacity of 1000 tpa, and critical items of equipment have been delivered, putting Envirostream in a strong support position concerning the national roll-out of a stewardship programme for batteries, as well as Victoria’s ban on consigning spent batteries to landfill.

In line with its research on chemical processing of both LIBs and alkaline batteries, LIT is finalising a practical hydrometallurgical flow sheet for battery metals recovery, including lithium, from spent LIBs, (It is a major shot in the arm for the company, considering the fact that, at present most global recyclers are failing to do this). It is a part of LIT’s programme to treat recycled battery in Australia.

The next test work module has been assigned to ANSTO by LIT and pilot plant designing is ongoing which will cater to lithium phosphate (LP) recovery from spent LIBs, which would be directly fed into creation of cathode materials for lithium-ferro-phosphate (LFP) batteries (a type of LIB). Given there is enough market appetite, the LP can also be converted to lithium hydroxide.

The key goal of LIT, Envirostream and VSPC is to establish a cost-effective and renewable circular battery economy in Australia. The LIT/EA/VSPC Production Cycle (given below) presents as opportunity for improving efficiency and reduction in manufacturing costs in the battery industry. This would further help in abiding by the ethical, social and governance standards as expected by the community.

By minimising the environmental footprint of portable power and improving resource sustainability, these technologies could greatly enhance global efforts to deal with climate change as well.

LIT’s lithium extraction processes, in combination with proprietary VSPC nanotechnology, create battery cathode powders directly from LP, without the need for lithium hydroxide or carbonate production as an additional step in the process. The company has also lodged patent applications for its LP precipitation and refining process.

Moreover, LIT is also evaluating conversion of LP directly to lithium hydroxide, the global market for which is quite robust. The refining process involving impurities from LP is also being considered for patent applications.

Meanwhile, LIT is further advancing development of its proprietary LieNA® technology for thermal conversion of spodumene concentrates into lithium chemicals, for which a preliminary feasibility study is also being carried out.

Lithium Australia currently prefers obtaining lithium minerals from mining waste streams or discharge from existing operating mines. But the company is also gauging other supply models such as Lithium micas, often associated with tungsten, tin, and tantalum as well as certain varieties of clay minerals.

Mr Strizek continues to rationalise LIT’s Australian tenement holdings, including its tenure in WA, the Northern Territory, Queensland and South Australia. A complete review of all historic and recent exploration activity has been completed and provided to interested parties.