In this article, we would discuss three stocks with recent updates made to the exchange. On 9 August 2019, the Australian Benchmark index closed at 6,584.4, up by 16.30 points or 0.25% from the previous close.

The company’s stock last traded on 11 September 2018 and it appointed Joint and Several Administrators on 7 April 2019. Accordingly, Deloitte Financial Advisory partners Vaughan Strawbridge, Glen Kanevsky, and Sal Algeri were appointed as the Administrators of the company.

On 9 August 2019, the company reported an update on the Implementation Deed. Previously, the company had reported that it received several non-binding indicative offers for the sale or recapitalisation of the company, and some its subsidiaries. 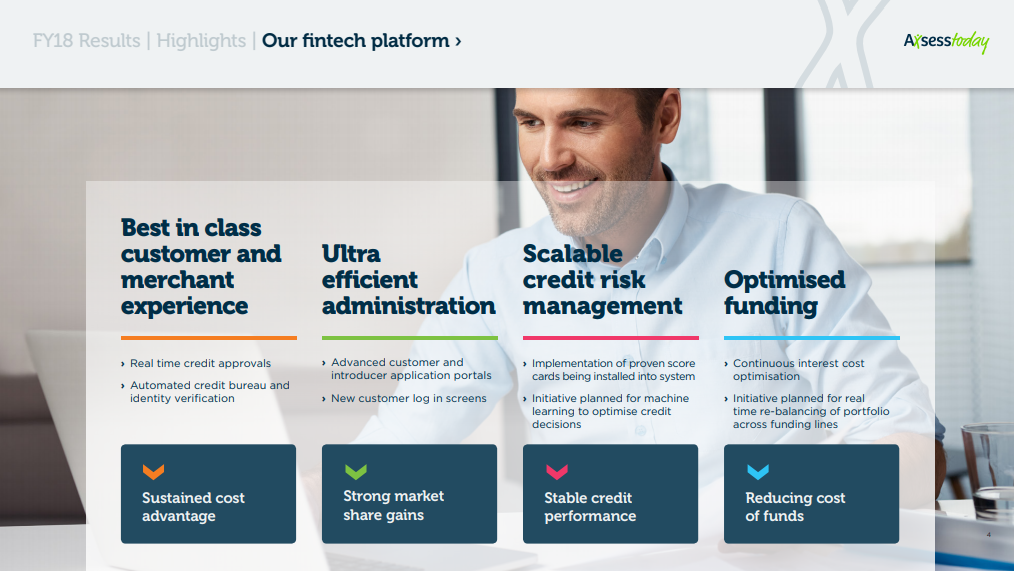 Accordingly, the company signed an exclusivity agreement with an affiliate of Cerberus European Investments LLC – an affiliate of Cerberus Capital Management, L.P. Presently, the Voluntary Administrators of the company had confirmed that an implementation deed had been signed with Cerberus. Subsequently, Cerberus would acquire all of the shares in ACN 603 303 126 Pty Ltd, Axsesstoday Operations Pty Ltd, Axsesstoday Retail Pty Ltd along with other assets of the company via a deed of company arrangement (DOCA).

Reportedly, the Voluntary Administrator and Cerberus are required to take necessary steps to complete the DOCA, and the Voluntary Administrator and Cerberus are also required to satisfy conditions to enter into DOCA. Under the conditions, the secured lenders of the company must accept the terms of repayment of the secured debt. And, the creditors of the company, AXL’s subsidiaries and the company must enter into DOCA at the second creditors meeting.

Besides, the Implementation deed enlists that conditions required to enter into the DOCA must be completed by 30 August 2019, and the DOCA should come into effect regarding the sale of AXL Subsidiaries by 13 September 2019.

Reportedly, the terms of DOCA are being finalised, and determination would arrive following the satisfaction of the above conditions. Besides, the realised amount from the sale of AXL subsidiaries, and other assets would be insufficient to repay unsecured creditors in full. Further, the terms of the DOCA would be a compromise of the claims of unsecured creditors. Importantly, it is anticipated that no return could be provided to shareholders from the sale of AXL subsidiaries.

Duxton Water Limited provides investors with access to invest in Australian Water Markets. The company owns and manages a portfolio of water entitlements, which provides water supply solutions to the irrigation community. Duxton Capital (Australia) acts as an external investment manager, which is a part of Duxton Group – a global asset manager focused on agri & alternatives.

On 9 August 2019, the company announced Dividend and Dividend Reinvestment Plan (DRP). Accordingly, it announced a fully franked interim dividend of AU 2.7 cents per share. Besides, the dividend would be ex on 2 September 2019 with a scheduled record date on 3 September 2019, and the payment would be made on 18 September 2019.

Reportedly, the company intends to operate DRP for this dividend, and the participants would be provided with a 3% discount to the share price. Besides, the share price would be based on 5-day VWAP preceding the record date, and the last to elect for DRP is 4 September 2019.

As per the release, the company is committed to distributing the dividends bi-annually while also increasing the level of franking for Australian tax purpose. Besides, the Board anticipated distributing another fully-franked dividend in March 2020 for approximately 2.8 cents per share.

Previously, in June, the company had notified about the several new leases that commenced on 1 July 2019. Subsequently, the new leases took the leased composition of the portfolio to 53%, and 70% of the company’s high security assets. It was asserted that the lease income of the company provides recurring revenue to allow the company to reaffirm the dividend target of March 2020.

Recently, the company reported cash flows for the quarter ended 30 June 2019. Accordingly, the company used A$2.14 million in operating activities, which included receipts from customers for A$679k, and the company paid A$1.26 million in income taxes, other payments included administration and corporate costs, interest and other costs of finance and management and performance fees. Below table provide the estimated cash flows for the next quarter. 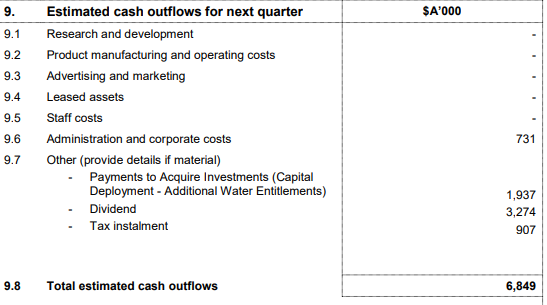 Agriculture-Focused REIT, Rural Fund Group had gone through the accusations made by the US-based short-activist, Bonitas Research LLC. Subsequently, the stapled securities of the group closed down by ~42% on 6 August 2019, and by almost 11 AM on 6 August 2019, the securities were paused for trading purposes. 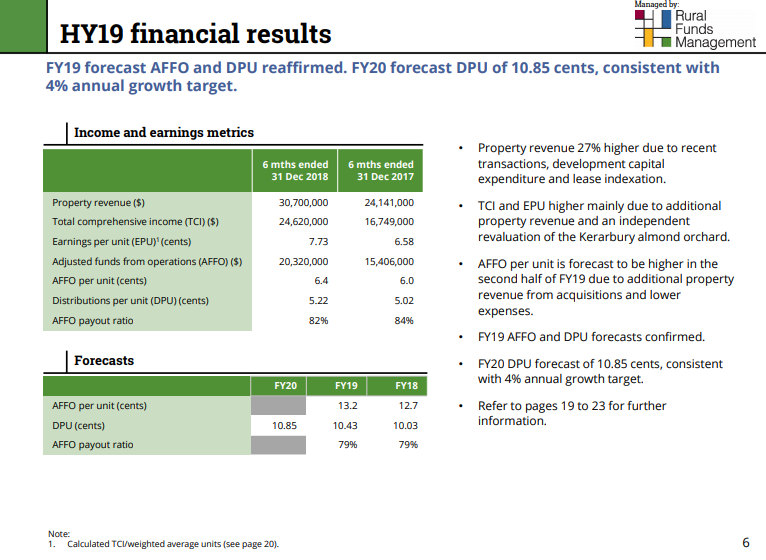 On 8 August 2019, the group reported further response to the short-activist, which acknowledged that group would not provide any further clarifications to the allegations made by the short-activist. Also, it was asserted that the group confirms the accuracy of the financial statements.

The releases noted that the company remains in line with guidance, and the full-year results would be released on 27 August 2019. Besides, the stock of the company has started trading since 8 August 2019, and it was asserted that the group’s staff & Directors might trade as well consistently with RFM Securities Trading Policy. Importantly, the security of the group closed up by over 41% on 8 August 2019.