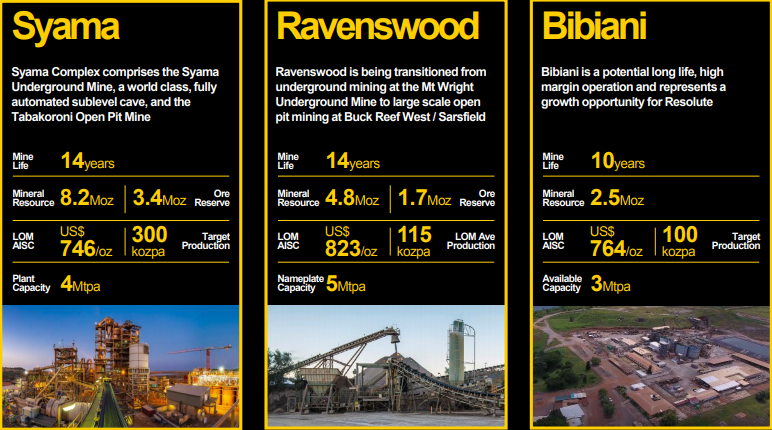 With edging innovation, Resolute Mining is globally recognised for using the most advanced mining automation system in the world. Its automation system has resulted in high-speed production and extra productive hours, taking the LOM AISC down to US$746 per ounce.

For March 2019 quarter, Resolute Mining produced 98,105 ounces (up 33%) of gold at an all-in sustainable cost (AISC) of US$740 per ounce (down 24%). This marks the record quarterly production of the company supported by an exceptional performance of Syama and Tabakoroni (within the Syama oxide circuit), leading to high-grade ore and strong recoveries.

Managing Director and CEO, Mr John Welborn stated that Syama’s record production of total 84,552 ounces gold (up 50% on prior quarter) with 71,186 ounces gold at Tabakoroni outlines the company’s decision to prioritise development, infrastructure and the automation implementation program at its Syama Underground Mine.

As further stated by Mr Welborn stated, Given the commercial production scheduled for September 2019 Quarter, Syama will be a powerhouse of gold production for the company for many years to come.

Cash, bullion and listed investments stood at A$86 million at the end of March 2019 quarter.

The company expects its Ravenswood’s production to improve in the June 2019 Quarter as a result of increased mill availability and improved production from the Mt Wright Underground Mine.

At the same time, implementation of the fully autonomous fleet and achievement of the commercial production at Syama remains the highest priority for Resolute.

During the March quarter, the company focussed on detailed mine design, business operations readiness planning and establishment of government approvals and support services for the Bibiani project, which the company intends to continue in June quarter in order to undertake a Final Investment Decision on the recommencement of operations.

On the investment front, the company continues to invest in highly prospective African-focused gold explorers, providing a pipeline of future development opportunities. The company further advances its preparation to get listed on the London Stock Exchange this year.

The company is expected to release new production and cost guidance in July 2019.

CLICK HERE FOR YOUR FREE REPORT!
Tags:
Mining Resolute Mining Limited (ASX: RSG)
All pictures are copyright to their respective owner(s).Kalkinemedia.com does not claim ownership of any of the pictures displayed on this website unless stated otherwise. Some of the images used on this website are taken from the web and are believed to be in public domain. We have used reasonable efforts to accredit the source (public domain/CC0 status) to where it was found and indicated it below the image.