The announcement is in line with earlier announcements regarding the procurement of project finance and the appointment of the project manager. In May 2019, BSR had achieved significant steps which include new mining plan, equipment purchasing, security, mining contractor, accommodation, roadways and dam repairs for the Makabingui Project.

Reportedly, Mining Plus of UK reviewed the new mining plan and carried out block modelling and optimisation, and resource model had been updated while standard operating procedures for all aspects of grade control have begun. Additionally, the announcement reads that first pass grade control drilling and other pit activities are to follow once clearing of the Pit One begins. The communication from the company also read that block modelling, and optimisation has commenced. 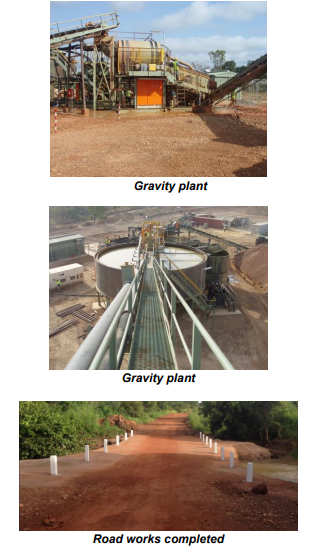 It is reported that orders had been placed for major equipment components for the processing plant, which includes ball mills, agitators, carbon elution heater and kiln, process screens, compressors and blowers, pumps and cyclones and the electricals supply equipment and equipment. Apart from equipment, BSR also upgraded the security forces, and security operations had been commenced. Reportedly, BSR completed the purchase of fencing material, and boundary works are underway. Meanwhile, the perimeter fence line was cleared by Bulldozer, and twenty solar lamps were bought as well.

Recently, the submission period of tender for mining contractors was closed and scheduled selection by BSR would release by 15 June 2019. It is reported that a tender had been commenced with four mining contractors, and three companies out of four visited the site on 14 May. Additionally, discussions are underway with European gold refineries who indicated interests to acquire the company’s gold production.

Also, during March 2019, the announcement released by BSR appointed Mr Andrew Goode as project manager for the project. Mr Goode possesses an experience of 38 years in project development, operational management of the project in open and tunnelling and mining. It is reported that he had demonstrated managing skills in mining operations at Botswana, Canada, Peru, Australia, Ghana, Guyana, Kazakhstan and Zambia. Mr Goode completed his education at West Australian School of Mines and studied Bachelor of Applied Science (Mining Engineering). Additionally, he is a member of the American Institute of Mining, Metallurgical and Petroleum Engineers and Society for Mining, Metallurgy and Exploration (SME).

BSR reported that Mr Goode had been widely experienced in development and construction of open pit and gold plants, pit optimisation, planning and scheduling of mines but not limited to management, maintenance, contract compilation, tendering, modification and repair of mobile earthmoving equipment, major fixed plant and infrastructure.