A Look at 2 REIT Stocks with Recent Updates – CWP, CIM

As per recent media reports, the economy of Australia is witnessing domestic and offshore headwinds, which might push slow economic growth in 2019. Adding to that, it will negatively impact property markets. The real estate industry has capital intensive projects with moderate barriers to entry. Let’s have a look at two real estate stocks, CWP and CIM, with their recent updates.

A real estate sector company, Cedar Woods Properties Limited (ASX: CWP) is a property developer and investor. It was officially listed on ASX in 1994. On 1st July 2019, the company via a release updated the market about the modification and extension of its corporate finance facility subsequent to the completion of an annual review. The company stated that the modifications include the longer facility tenure, with the previous three year facility now comprising a mix of three year and five year debt as well as the introduction of National Australia Bank to the $205 million corporate finance facility.

Furthermore, subject to consent by lenders, the facility will be reviewed annually and has the potential to be extended for an additional year on 30 December each year, refreshing both the three and five year terms.

Looking at the company’s recent acquisitions. Recently, the company inked a conditional contract in order to acquire a former TAFE site, 133 Salvado Road, Subiaco located only 4km from the CBD in the sought-after western suburbs of Perth for an amount of $15.05 million, plus GST. The inking of the contract confirms the company as the preferred proponent in order to purchase the 1.4-hectare site. The completion remains conditional on the final acceptance by the City of Subiaco, and thereafter, the approval of the company’s Board.

In Q3 FY19, the company remains on track to report a strong rise in earnings in FY19 and significant progress on several key projects. During the quarter, the construction of multiple stages and projects were completed by the company, with many further stages anticipated to be completed and settled by the end of FY19. On the flip side, the company reported revenue of $204.1 million in 1H FY19, reflecting a growth of 268% on pcp. The net profit of the company stood at $30.8 million in 1H FY19, reflecting an increase of 857% as compared to 1H FY18. The company declared an interim dividend of 18 cents per share, outlining the growth of 50%. Cedar Woods further described the major factors such as slower home loan processing by banks, investor uncertainty on taxation policy, a downward shift in consumer sentiment in Melbourne and Sydney and banks imposing tighter lending criteria on purchasers, which have affected sales and enquiry levels in 1H FY19. 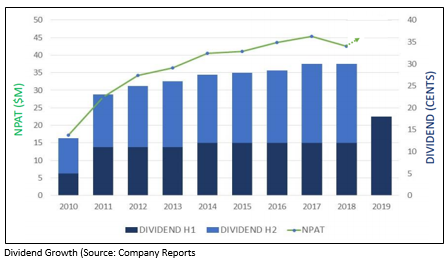 CIMIC Group Limited (ASX: CIM) is involved in providing services related to mining and operations, construction and maintenance to its clients. It was officially listed on the Australian exchange in 1962. On 1st July 2019, the company published a release stating the finalisation of Cross River Rail public private partnership package. The company further elaborated that its group companies, CPB Contractors, UGL and Pacific Partnerships have reached contractual close with the State of Queensland as part of the Pulse consortium. In addition, the State Government has offered a capital contribution of $5.4 billion for construction. The contractual close took place on 30th June 2019, with the construction to begin later this year. Accordingly, the company’s revenue stands at around $2.73 billion.

Importantly, the company pointed out that it has led the development of the project’s proposal with Pacific Partnerships, a lead sponsor, providing 49% of the equity finance and 51% of the equity finance will be provided by BAM PPP PGGM, Ghella Investments & Partnerships and DIF. While UGL will provide maintenance services for the project over 24 years, the CPB Contractors will be delivering the construction and design in a joint venture with BAM International, UGL and Ghella.

The group reported revenues of $3.4 billion, reflecting a growth of 6% on a Y-o-Y basis, with a solid performance throughout all operating companies. CIM reported stable PBT, NPAT and EBIT margins of 7.3%, 5.3% and 8.2% respectively, driven by a diligent focus on project delivery and cost discipline. The rise in net finance costs from a higher level of bonding, additional working capital initiatives and an increase in leased asset expenses have supported the growth of the business.

CIM delivered strong EBITDA cash conversion rate of 108% in the last 12 months and reported gross capital expenditure on the back of investment in tunnelling equipment with continued spend on mining equipment driven by revenue growth. The cash flow from operating activities stood at $247.5 million in Q1 FY19 against $154.3 million in Q1 FY18, reflecting a rise of 60.4% on pcp. 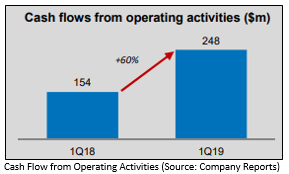