A lens over Top-Down Investing Strategy

A strategic investment involves money, a diversified portfolio and a long-term focus. Once these essentials are aligned, as per investors choices and preferences, appropriate investing strategies can be chosen and implemented which would do justice to the investors approach. The two best ways a portfolio is built is firstly, tapping the place to invest and secondly, locating specific assets/stocks that meet the investor’s criteria. In this context, the Top down strategy is majorly famous amongst the global macroeconomic investors, wherein the investor decides on his investment from a macro lens.

In this article, let us understand the concept of Top-down investing strategy in detail:

What is Top Down Investing Strategy?

The simplest way to understand the Top down investing strategy is to look at it as an approach that investors take where they look at the macro picture of the economy. Post the scrutinization of the domestic as well as global macro indicators, granular micro factors are looked upon to undertake investment and trading decisions. Investors then evaluate the general market conditions, placing a further analysis lens on industrial sectors that are giving sustained returns. Finally, the company level fundamentals are assessed to understand how they and their stocks have performed in the past and the expected growth prospects for the same. 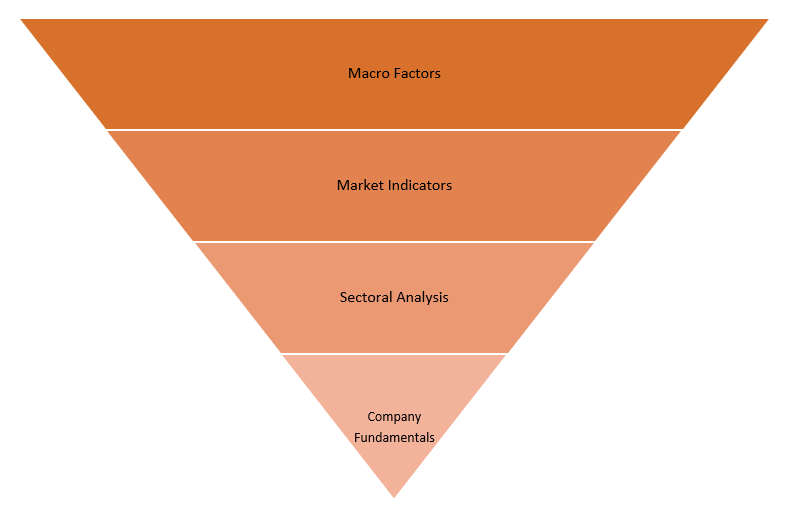 What is Bottom Down Investing Strategy?

The Top down investing strategy is in dire contrast to the Bottom up Investing strategy, wherein the investor or the interested analyst closely looks at and analyses the fundamentals of the stock first. In this approach, the go-to stocks are the ones that are likely to perform well, and the hunt is for the company which is anticipated to outperform its peers. Little or no interest is given towards understanding the bigger picture- the economic factors, market conditions, sector forecasts, industry fundamentals, and so on.

Post analysing the macro indicators, investor then delves into evaluating sectors which are doing well in terms of technological development, government policies support, strong consumer demand, global impetuses, etc. With the selected sectors that are well positioned compared to the peers, the investor then cherry picks the assets/stocks based on a combination/either of the technical and fundamental analysis.

Advantages and Disadvantages of Top down investing strategies:

The biggest benefit of the Top-down investing strategy is that it considers all major influences- economic and political, making it a robust and a better forecasted assessment. With the level of in-depth research and scrutinization, the risk of investment is majorly reduced. Moreover, the Top down investing strategy gives the option of diversifying one’s portfolio of investment across different sectors, in turn reducing the risk and loss. With the analysis present with investors post a Top down strategy formation, it is unlikely that one would fail to make market predictions.

On the flip side, the biggest drawback that the Top down-market strategy is perhaps the huge expanse of time and efforts it would consume, to derive at an in-depth research-based conclusion of the economy/sector/assets. Moreover, the approach ignores the presence of undervalued securities, which are stocks that trade below the price of its intrinsic value. They are likely to generate potential returns to investors but are looked over in this strategy’s approach. Market experts believe that there is a possibility that the research and predictions may fail to deliver, resulting in losses for the investors.

Top Down strategy in the Australian context:

The economy of Australia is a mixed-market economy. According to the Organisation for Economic Co-operation and Development, the economy of the country has been resilient, with rising employment and labour-force participation. Deemed amongst the most prosperous and healthy economies of the world, the Aussie land is expected to continue its output growth stream.

On the other side of the story, there is scope of improvement in the socio-economic aspects, though the living standards are fairly good in the country. Adding on to this heat are the economic challenges, that are prevailing in the country. The scenario can be understood given the recent trade wars, interest rate cuts and jolts in its cream industry of mining.

Looking into few of the macro-economic factors that influence the strategy in discussion, the resident population of the county was projected to be ~25,406,179 on 9 July 2019, as per ABS stats. The resource strength of the country can be understood by the fact that every 56 seconds, there is a new person that arrives in the country.

Looking into the GDP of the economy, the Aussie economy grew by 0.4 per cent in the March quarter this year and the major driver for this growth was the increase in the country’s exports. The terms of trade rose by 3.1 per cent.

Looking at the inflation witnessed in the Aussie economy, for the March 2019 quarter, the CPI figures remained flat, when compared to the rise of 0.5 per cent that occurred in the December quarter.

On the interest rates aspects in Australia, after a rate cut of 25 basis points in June 2019, the RBA shunned down the interest rates to 1 per cent, in the first week of July 2019, amidst the unsteady employment level and wage growth in the country. With the motive to aid employment growth and achieve inflation targets, for the first-time post 2012, the rates cut were reduced in two successive months.

Given the macroeconomic indicators for the Australian economy explained above, further delving into equity market performance reveals that S&P ASX 200 has surged in 2019 so far, with experts believing that they are at top-notch levels, despite facing the known concerns. Let us wait and watch the stories that the market unfolds in the coming times.

ALSO READ: Australian IT Stocks Trading At A Premium, Are They Risky?