Ora Banda Mining (ASX: OBM) has released its Quarterly Report for the three months to 30 September 2019, which turned out to be quite a momentous period when the detailed infill resource definition drilling program was implemented including:

The company ended the quarter with a well-exploited balance sheet, free from any debtor or creditor claims and further supported by strong cash balance of $20.64 million.

Company also announced a capital raising transaction, for total proceeds of $18.5 million (before costs) by the issue of 100 million new shares at $0.185 per share. First tranche was completed during the quarter, which involved the issue of 57.6 million shares, of which the major existing investor Hawkes Point Holdings I Limited subscribed for 42.4 million new placement shares. Hawkes Point investment is subject to shareholders approval and is expected to get settle in the second tranche.

OBM got a detailed review of the Davyhurst Gold Processing Plant and associated infrastructure by GR Engineering Services (GRES), which estimated the capital cost for remedial works and recommissioning to be ~AUD 8.52 million (EPCM basis), being 43% lower than the companyâs estimate of AUD 15 million.

Other than the above development, Oran Banda continues to focus on validating the technical and economic viability of mining and processing ore from the five advanced prospects with the primary objective of the current drilling program being expansion and upgradation of the known resources and subsequent delivery of a robust five-year mine plan that envisages both open pit and underground mining operations. 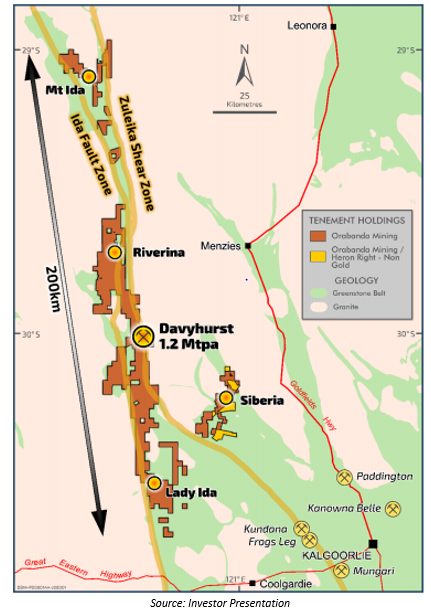 A definitive feasibility study (DFS) will also be completed for all five areas, to develop an investment case for production at the Davyhurst Project.

Waihi, a high priority exploration and development target located 3km from the processing hub, presents a significant opportunity for near term low strip open pit production followed by higher grade production from underground areas. A total of 3,053 metres of RC drilling and a further 3,171 metres of diamond drilling was completed at Waihi during the quarter under the detailed resource infill drill-out program.

Located 48 km via an established and certified heavy haulage road from the Davyhurst processing plant, Riverina presents a major opportunity for near term low-strip open pit oxide production. The first RC drill rig was mobilised to site at June quarter end and work commenced on the Riverina Phase 1 infill drilling program on 3 July 2019, targeting reduction of overall drill spacing on the 3 lodes at Riverina (Main, Murchison and Reggie lodes).

A total of 80 RC holes (6,267 m) were completed at Riverina and assay confirmed Phase 1 infill drill to be consistent with the pre-drilling expectation, confirming the mineralisation model, geometry and grade distribution of the deposit.

All data and assay results are being integrated into the Riverina mineralisation and Mineral Resource models and this would be completed by December quarter 2019. Ora Banda is currently planning Phase 2 drilling that will target stepped resource extensions both along strike to the north and south of the current resource boundary limits and below the base of the current resource boundary.

Siberia is a historical mine area located 37 km south-east of the Davyhurst Processing Plant where external consultants Entech were engaged to update the Sand King and Missouri reserve statement. Work undertaken during the quarter included-

The re-blocking and optimisation of both pits was also carried out while after the review of existing data for the Sand King and Missouri deposits, an appropriate selective mining unit (SMU â 2.5m x 2.0m x 2.5m) was adopted to better estimate possible dilution during mining operations. The company expects to release the updated reserve statement for the two pits at Siberia in Q2 FY 2020.

A detailed desktop review of all existing Callion data prior to setting drill plans was undertaken during the quarter. Current forecast drill metres at Callion include 7,800 metres of RC and 1,200 metres of Diamond drilling. A dedicated Senior Project Geologist started working on 23 September 2019 to lead the Callion resource definition program and drilling commenced in late October 2019.

The companyâs employee ramp up continued throughout the three months with a Senior Resource Estimation Geologist commencing employment with Ora Banda on 2 September followed by immediate commencement of review work on the five key project areas.

During the quarter, all Ora Banda regional exploration tenure was domained into prospect areas and during the process, a preliminary exploration stage ranging from Conceptual (1), Testing (2), Confirming (3), Defining (4) to Delimiting (5) was assigned so that prospects can be compared at various levels of exploration activity.

Stock Performance: Ora Bandaâs market capitalisation stands at ~ AUD 95.2 million. On 1 November 2019, the OBM stock settled the dayâs trade at AUD 0.175. OBM has delivered positive returns of 9.38% year to date and 2.94% in the last one month.