Resource sector of Australia is one of the key contributors in developing the economy of Australia in the form of economic wealth, high wages, investment and tax revenues. The resources sector has been in an explosive growth since the mining boom in the mid-2000s. Along with the mining services, the resources sector adds up to 8% of the economy. At the time of writing on 6h Aug 2019, (AEST 11: 49 AM) S&P/ASX 200 Resources sector was trading at 4,672.8, down 1.34%, while the benchmark index S&P/ASX 200 was trading at 6,483.2 also under pressure and down by 2.42%. In this article, we will cover updates on 5 stocks from the resource sector.

Cobalt Blue Holdings Limited (ASX: COB) is an Australia registered company, which is engaged in development and exploration of Cobalt having a major focus on the development of Thackaringa Cobalt Deposit and Broken Hill etc. Cobalt Blue Holdings Limited was listed on ASX in 2017. Recently, the company, via a release dated 5th August 2019, published its diggers and dealerâs presentation, wherein it communicated about the status of its projects. The company stated that with respect to significant defined resources since 2017, the company witnessed a total resource of 111 Mt, containing 79,500 tonnes of cobalt. The company reported total resource of 32 Mt, 18 Mt, and 61 Mt in Pyrite Hill Deposit, Big Hill Deposit and Railway Deposit, respectively.

The company has recently inked a Testwork co-operation agreement with Global Energy Metals Corporation (or GEMC), which recently acquired the Millennium Cobalt-Copper-Gold deposit near Mount Isa, in Australia. Further, the company is planning to test-apply its proprietary minerals processing technology to the cobalt-pyrite material derived from the Millennium Project.

The company also highlighted on the uses of cobalt for EV batteries, as per the company presentation, cobalt is a critical safety component of lithium ion batteries as it is essential for stopping the battery from overheating, it provides stability for multiple charge and discharge cycles supporting multiple year battery lives for EVs and on the technology front, the company reported that cobalt will not be engineered out of lithium ion batteries in the near future.

Australian registered metal and mining sector company AVZ Minerals Limited (ASX: AVZ) is primarily involved in mineral exploration, was officially listed on ASX in 2007. Recently, AVZ, via a release dated 5th August 2019, updated the market with results from its Roche Dure Resource Samples. The company further stated that it had received favorable outcomes from Early Metallurgical Test Work on Roche Dure resource trials. It added that Phase 1 characterization test work is on the verge of completion, and it is planning early commencement of Phase 2 Confirmatory test work. 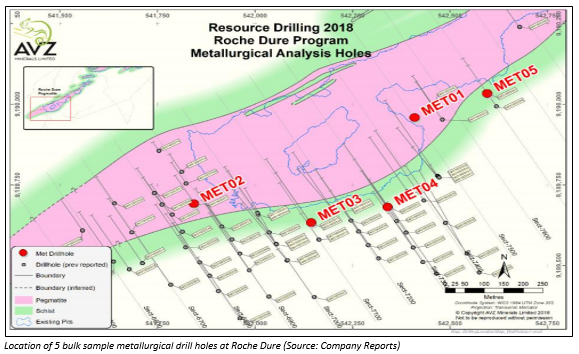 It stated that the arbitrarily chosen drill core interval grade variability ranged to over four percent Li2O from unmineralized pegmatite. The Test work for Heavy liquid separation is continuing in the 200-kilogram Bulk Sample sub-set. It also stated that Mineralogical investigations are on track in order to ascertain target. Additionally, the company has shipped Ore sorting test work samples, for amenability testing, to an equipment supplier.

On the financial side, the company has a strong cash position of $8.7 million and zero debt as reported in its quarterly update.

Buru Energy Limited (ASX: BRU) is an Australia registered company, which is into production, development and exploration of petroleum. Buru Energy Limited got listed on ASX in 2008. Recently, the company, via a release dated 5th August 2019, updated the market with the status of operations at the Adoxa 1 exploration well. The company stated that the well has been drilled in 152-millimeter hole to a depth of 1,609 m at which point a bit trip has been undertaken. Additionally, the existing operation is completing the bit trip prior to drilling ahead to total depth.

The Adoxa 1 exploration well has witnessed positive oil shows in cuttings samples, along with live oil noticed over the shakers at the surface, in what is understood to be a good quality sand section at the measured depth of 1,443 m. Adding to that, it was also stated that there are further potential reservoir targets within the current depth and the planned total depth of 2,200m, which includes the Anderson Formation, and these targets are anticipated to be taken up during the next few weeks. 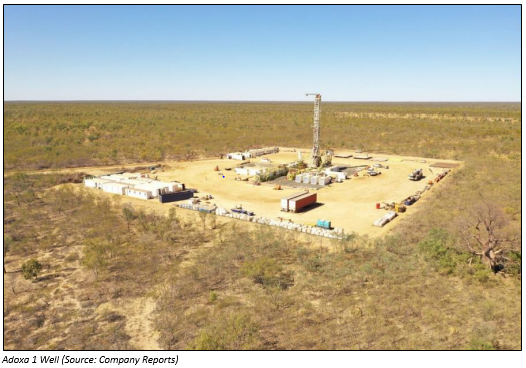 Independence Group NL (ASX: IGO) is primarily involved in the exploration and development of Nickel, Copper, Zinc, Gold and Silver. Independence Group NL got listed on Australian Stock Exchange on 17th January 2002. Recently, the company, via a release updated the market that Commonwealth Bank of Australia has ceased to be a substantial holder in IGO from 2nd August 2019.

The company published its diggers and dealerâs presentation, wherein, it reported net profit after tax amounting to A$76 million in FY19, reflecting YoY growth of 43% and posted net cash and debt of A$348 million and A$86 million, respectively. It delivered EPS growth of 44% in FY19. The company outperformed at Nova in the fiscal Year 2019 with nickel production of 30,708t, cash costs of A$2.07/lb and EBITDA margin of 51%. The company highlighted that the battery chemistry is trending in nickelâs favour and nickel market is forecast to continue in deficit.

Previously, the company had updated the market with its new process to produce high-quality nickel sulphate.

Westgold Resources Limited (ASX: WGX) is into operation, exploration and development of gold mines. Westgold Resources Limited was listed on ASX in 2016. Recently, the company updated the market about its plan for demerger of its Polymetallic Assets. The company further stated that it has proposed to demerge the wholly-owned subsidiary, Castile Resources Pty Ltd in order to unlock the value of Polymetallic assets for Westgoldâs shareholders. Post the proposed demerger, Westgold shareholders would receive 1 Castile share for every 4 Westgold shares they own. Castile will have around 98 million new shares on issue.

Additionally, Castile also proposes to wrap up fundraising by an entitlement issue to its shareholders who remain on its share register on the record date on a 1:1 basis at $0.20 per share, which provides them with the right to participate in the advancement of Castileâs exploration and development assets.

In other update, the company stated that Andromeda Metals had executed a binding purchase and sale agreement with WGX in order to sell its Rover Copper?Gold Project in lieu of cash amounting to $650,000.

The company presented at the diggers and dealers. The company highlighted on its path to re-shaping the focus. 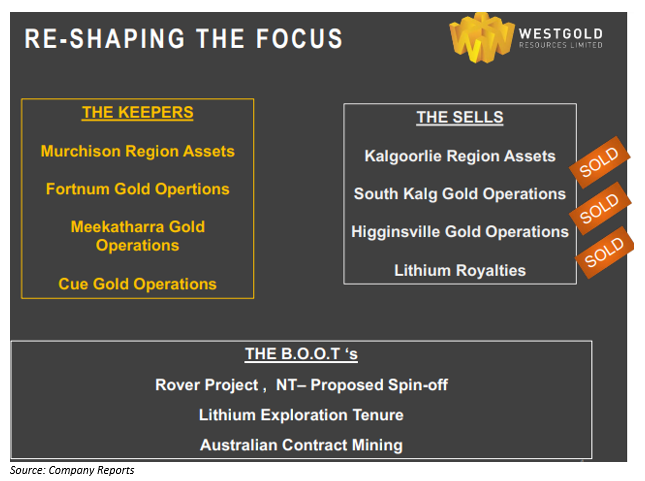 The following picture provides an idea of its FY20 guidance. 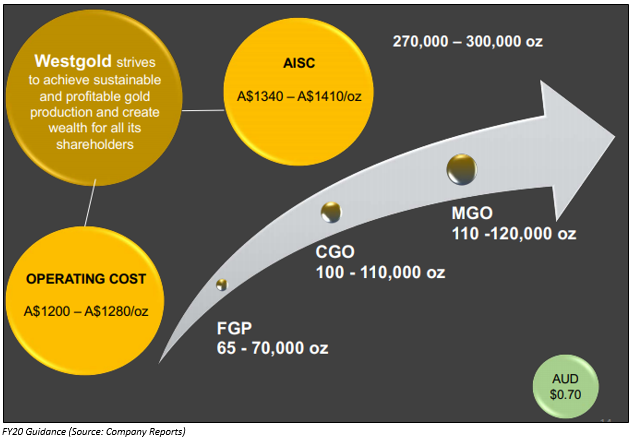 Previously, the company had updated the market about divestment of Higginsville Gold Operation.