A Glance at the Construction Space Players in Australia: FBU and SRG

The construction sector in Australia is one of the prime growing areas in the country. Factors like population growth, housing, technology, and labour are major contributors to the sector’s growth in recent times.

As per a trusted industry outlook, the major construction companies are forecasting a continued solid uplift in major non-residential project work over the course of 2019. Growth would be followed by strong non-mining infrastructure aided by the substantial growth push from public sector spending on the transport infrastructure projects.

The Engineering construction would continue to be a key driver of growth with total turnover expected to rise 8% in 2019. Furthermore, there has been notable development on the major road and rail projects backed by public sector spending.

Commercial building activity is anticipated to be strongly positioned in 2019 as well aided by rising private and public sector investment. The total value of the commercial work is anticipated to increase in the higher single digit figures.

Few key private players in the Construction space in Australia are listed under:

From the listed universe, these are the few construction companies:

Recent updates on two companies catering to the construction space:

With roots dating back to 1909, Fletcher Building Limited (ASX: FBU) functions through seven divisions- Building Products, Concrete, Distribution, Land and Residential Development, Construction, Steel and Australia division. FBU manufactures building products and operates retail businesses that distribute these products and many more to tradespeople. Besides this FBU builds homes, buildings and infrastructure and is listed on the NZX and ASX.

Presently, the company is the only local fully integrated manufacturer of cement (Golden Bay Cement business) in New Zealand. 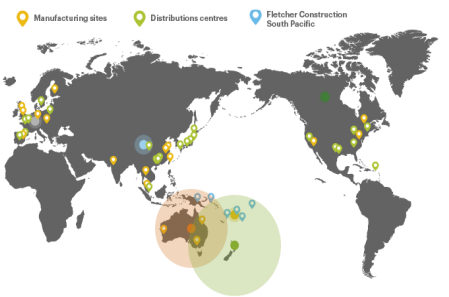 On 4th June 2019, the company announced that it had concluded the sale of the Formica Group to Broadview Holding BV, ahead of its schedule. Below are the details of the sale proceeds:

Commenting on the completion of this sale, CEO Ross Taylor stated that the this was one of the key aspects of the five-year strategy that the company has laid down in June last year, to exit non-core global businesses. This strategy aids FBU to lay its focus on capital and capability behind the Australian New Zealand businesses, with building products and distribution at its core.

The company would be conducting its Investor Day on 26th June 2019, wherein it would provide more insight on the sale.

The completion of this sales depicts that FBU would account for eleven months of earnings from the Formica business in the FY2019 result. The FY19 EBIT guidance is provided below:

On May 7th, the company notified about two of its executive team members stepping down from their respective roles in time. Chief Executive Building Products, Michele Kernahan would leave the company at the end of July. John Bell, FBU’s Chief Information Officer, would be stepping down post his retirement and is most likely to leave the company in the 2nd half of 2019. 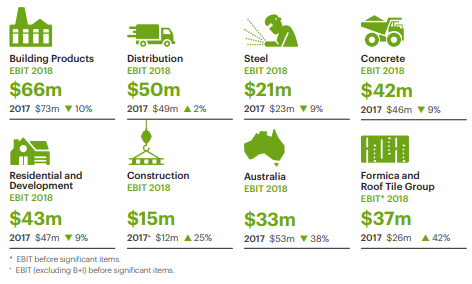 SRG Global Limited (ASX: SRG) is an engineering focussed, maintenance, construction, and mining services group functioning across the asset lifecycle. The company headquarters are in Subiaco.

On 4th June 2019, the company announced that it had tied a three-year contract renewal with Transpower New Zealand Limited. The renewal was made to deliver specialist industrial services like removal of present coatings via specialist blasting, minor steel replacement and application of industrial protective coatings.

Transpower is the owner and operator of the National Grid, high voltage transmission network across New Zealand, with over 170 substations.

The anticipated revenues (based on historical revenues) under the framework contract were approximately NZ$35 million.

Commenting on the same, Global Managing Director, David Macgeorge stated that contract further reinforced the strong relationship of both the companies.

The deal is for an initial four-year period and with the option to be extended by 2 years. The proceeds of this are most likely to generate a revenue of almost $45 million across the six-year term or approximately $30 million in the initial four-year term.

Continuing its contract winning spree, the company, announced a long-term contract with South32 Worsley Alumina on 27th May 2019. The three-year initial contract has the option to extend further by three years. In the Worsley Alumina operation, the project scope is inclusive of the provision of engineered access solutions. The revenue anticipated is approximately $32 million in the initial three-year term and around $60 million, subject to the exercise of the extension option.

The company had also secured two contracts worth approximately $17 million with VicRoads and Belhasa Six Construct LLC on 23rd May 2019.

The company presented at the Euroz Conference on 13th March. Below are a couple of snapshots of its highlights from the presentation: 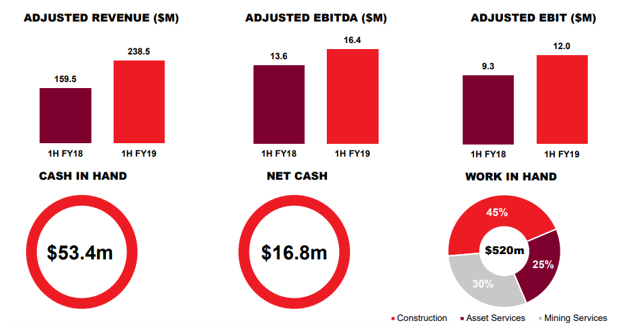