Australian-headquartered Nova Minerals Limited (ASX: NVA) is a developer and minerals explorer that focusses on lithium and gold projects in North America. The company has a diverse portfolio of projects across Canada, the US and Australia. The two key projects of the company are:

The other exploration projects of the company include Officer Hill project in Australia’s Northern Territory and HPA project in Western Australia. The company intends to offer diversification to shareholders via exposure to base and precious metals and aims to capitalise on the booming rush for lithium-based energy storage.

As per the Department of Industry, Innovation, and Science (DIIS) the global electric vehicle sales are projected to increase from a merger 2 million to 50 million by 2030. 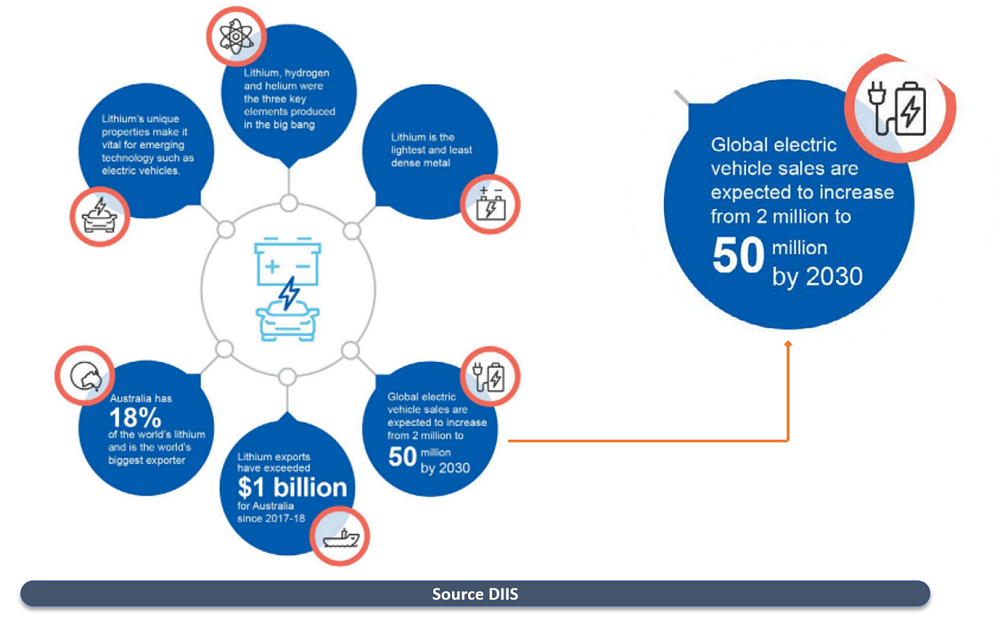 The company has recently released a first quarterly report on the ASX. Take a peek at the significant developments reported by Nova during the quarter at its key projects below:

Nova holds 51 per cent JV interest in Estelle Gold Project, which is situated in an emerging gold district in a highly productive gold belt, Tintina Gold Belt (TGB). The company continued its accelerated exploration strategy at its Estelle project during the quarter, achieving the following milestones:

The company announced the discovery of a high-grade gold mineralisation at one of its numerous potential gold deposits located on the Estelle Gold Property requiring additional drilling, RPM Prospect.

Nova re-sampled the historical diamond drill hole SE12-008 as part of the 2019 field program, which yielded intersection grading 1.02g/t Au over 120.40m at RPM. As per the company, the RPM Prospect results clearly exhibited the size, scale and strength of the gold project’s exploration upside.

On 11th September 2019, the company released a JORC compliant maiden inferred resource of 2.5 million ounces of gold at its oxide Korbel prospect, one of the fifteen known occurrences at Estelle Gold Project. The resource estimate was announced under phase 1 resource drill programme to define the scope and size of the project area.

On 2nd September 2019, Nova notified about the discovery of high-quality bulk “Starter Pit” within Block B of the Oxide Korbel deposit at Estelle Gold Project. Assays returned grades of up to 27.6 g/t gold for drill hole OX-RC-16, within large intercepts of 70.1m grading 1.20 g/t gold. The holes were drilled under the RC (Reverse Circulation) drill program concluded during the 2019 field season.

The company believes that the starter pits are vital to deliver better informed economic data in future.

Subsequent to the September quarter, Nova added an extra 101.65 km2 tenement adjoining the current area of Estelle Gold Project in Tintina Gold Belt. The company announced a strategic increase of 86 per cent in the land position of the project, that took the total Estelle claims group to 220Km2.

Going forward, Nova intends to fast track exploration at the Estelle Gold Project, with a view to gradually upgrade and increase the resource base. The company is likely to invest its funds in a series of continuing exploration campaigns across the district-scale Estelle Project, including targeting, mapping, geophysics and drilling programs.

Nova’s subsidiary, Snow Lake Resources Ltd (73.8 per cent Stake), holds 100 per cent interest in the Thompson Bros. Lithium Project, located in Wekusko Lake, Manitoba. The project is well advanced with a maiden Inferred Resource of 6.3 Mt @ 1.38 per cent, containing 86,940 tonnes of Li2O with an additional exploration target of 3 to 7 Mt @ between 1.3 and 1.5 per cent Li2O in the immediate area of the resource.

The following developments were observed at the project during the quarter:

Nova reported on 19th August 2019 that Snow Lake entered into preliminary discussions with the Arctic Gateway Group for the future capacity to the Tanco mine as part of the company’s logistics assessment.

The company highlighted that the logistics solution assessment is likely to further boost the project as a Canadian Tier 1 lithium deposit. The company also highlighted it as an opportunity to further de-risk Snow Lake’s clear path to production, low capex and cash flow strategy.

Nova notified in August this year about the signing of a major Memorandum of Understanding (MoU) with Tanco Mining Corporation of Canada Limited to fast-track its development works at the Thompson Brothers Lithium Project.

The company informed that Christopher Gerteisen and Dale Schultz recently conducted a field trip to Southern Manitoba Tanco mining district, to meet with Tanco Mine officials and map out a future working relationship in line with the MoU, whereby Snow Lake Resources will provide lithium ore to the Tanco Mine.

Mr Chris Gerteisen (Highly experienced corporate and mining executive), was appointed as the non-executive Director of the company in September 2019.

The company made substantial progress on operational as well as on the financial front during the quarter.

In July 2019, the company also provided an opportunity to eligible shareholders to increase their holdings via a Share Purchase Plan (SPP) to raise up to $1 million. The company closed its SPP with over 200 per cent oversubscription after receiving overwhelming support from its shareholders. As a result, the board of directors will increase the amount raised under the SPP to $2.5 million.

Taking the total capital raised to more than $3 million with no capital raising fees. Thereafter, the NVAAC option was converted to bring in an additional $140,000.

Nova reported a cash balance of $2.63 million at the end of September 2019 quarter. The company has estimated a cash outflow of $750k for the next quarter, with $400k likely to be spent on exploration and evaluation activities.