Generally, the core activities of fund management companies revolves around capital growth and capital preservation, however, there are some companies, which are in the business of investment and superannuation platform services. Let’s have a broader look at the below-mentioned stocks and their recent updates.

The company is entitled to around $83 million of estimated performance fees for the year ended 30th June 2019 (FY19), which may fluctuate from time-to-time and average funds under management for the company was $75.8 billion (FY19) when compared to $59.0 billion for FY18. Moreover, the company will pay distributions of around $604 million in July.

Importantly, in the first half of the fiscal year 2019, the principal investment of the company comprised of investment in listed shares, a small number of unlisted investments, Magellan Funds, and surplus cash after allowing for the Group’s working capital needs. With respect to the retail business, the company has three channels to market, including (1) Independent financial advisers/broker advised channel consisting of relationships with more than 500 independent advice firms and more than 40 stockbroking firms across Australia using the company’s active ETFs; (2) Bank/AMP aligned channel, consisting of strong relationships and representation with 4 of the top 5 major firms, with separate versions of the Magellan Global Fund available at Commonwealth Bank, BT/Westpac and AMP; (3) Self-directed channel consisting of active ETFs combined FUM of $1.45 billion with ~25,000 direct unitholders and Magellan Global Trust FUM of $1.68 billion with ~34,000 direct unitholders.

Platinum Asset Management Limited (ASX: PTM) is an Australia registered fund manager, investing majorly in global equities. Platinum Asset Management Limited was officially listed on ASX in 2007. Recently, the company via a release dated 7th June 2019 stated that its funds under management amounted to $24.93 billion as at 31st May 2019 when compared to $26.57 billion as at 30th April 2019.

Additionally, Australian Securities and Investment Commission updated the market on implementation of Royal Commission recommendations for a civil penalty amounting to $525 million in order to ensure that the financial services are working efficiently, honestly and fairly. The company has always sought to avoid conflicts of interest and acted in the client’s best interest. PTM further stated that the gross flows for six months to Dec 2018 were resilient, which came in ahead of the previous half and down slightly on the pcp and reported gross flows in 1H FY19 included ongoing QMF inflows of approximately $164 million and strong PT fund inflows. 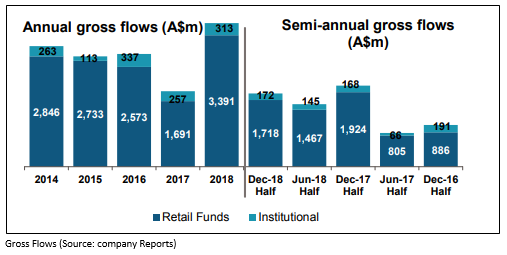 Platinum Asset Management Limited is well placed to move forward and has a substantial position in Australia with highly differentiated products. The company aims for higher foreign equity exposure to continue to rise in Australia.

HUB24 Limited (ASX: HUB) is an Australia registered company, providing superannuation and investment platform services to its clients. HUB24 Limited was listed on ASX in 2007. The company on 8th July 2019, announced that FMR LLC and its listed entities have ceased to be a substantial holder effective 3 July 2019. Recently, the company via a release dated 3rd July 2019, pointed out that several statements in a recently published article in AFR (Australian Financial Review) were needed to be clarified and incorrect. The company clarified that it takes regulatory obligations and interests of its client seriously in the design and operation of its product. HUB further stated that it maintains flexible fee arrangements with licensees for its clients. 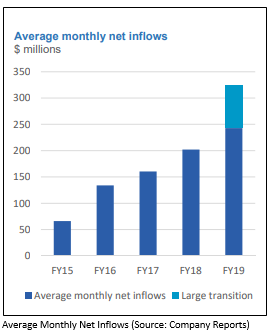 Importantly, the company is planning to roll out the availability of Challenger annuities through the HUB24 platform in the subsequent quarter, wherein it will be providing advisers and clients with an integrated experience, including pension products.