SCA Property Group (ASX: SCP) is engaged in the management of, and investment in shopping centres, which are located in Australia. It was officially listed on ASX in 2012. The company, via release dated 12th June 2019, announced the results of its property valuations as at June 2019, wherein SCP highlighted that the total value of investment properties was reduced by $6.1 million to $3,147.0 million on the back of valuation NOI (net operating income) growth 0.4%, offset by cap rate softening of 5 basis points to 6.48% at June 2019. However, there were 15 properties, which were independently valued, and the remaining 70 properties were internally valued.

The valuations of sub-regional centres declined by $5.5 million, with an upside of 0.4% in NOI along and capitalisation rates amounted to 6.75%, reflecting an increase of 11 basis points. This is considering a softening in demand for centres with greater exposure to discretionary retail categories. In addition, the independent valuations of investment properties witnessed a fall, given the higher proportion of sub-regionals being independently valued, which included a decline of $4.8 million in the value of its centres, which are located at Kwinana, Western Australia on the back of softening of the cap rate from 6.50% to 6.75%. 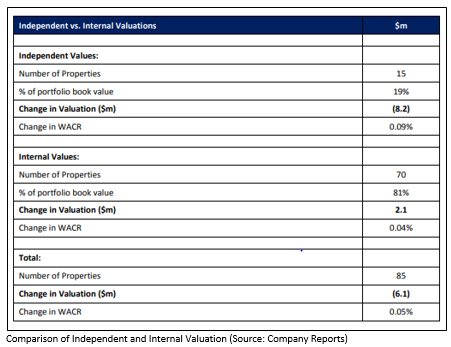 A real estate sector company, Viva Energy REIT (ASX: VVR) is engaged in investing in the service station properties. It was officially listed on ASX in 2016. The company updated the market via release dated 12th June 2019, about the distribution reinvestment plan for the half-year ended 30th June 2019. A distribution reinvestment plan is proposed by the company under which investors reinvests the cash dividends in additional shares of the underlying stock on the announced dividend payment date. In addition, the company will be paying 7.18 cents per security for the half year ended 30th June 2019. However, the eligible stapled security holder of the DRP will be offered to those who are registered with the New Zealand and Australia only address.

The company, in its AGM presentation, reported distributable earnings of 14.02 cents per security in FY18, a rise of 4.5% and is ahead of guidance when compared to FY2017, while net tangible asset experienced a rise of 3.8% to $2.20 per security.

In terms of acquisition strategy, the company will continue to consider acquisition and development opportunities in line with the following investment criteria.

For FY 2019, VVR will optimise its core business and will maintain a low management expense ratio. The company will manage its balance sheet to maintain diversified funding sources with the pro-forma gearing to 32.3% at this point in the cycle. The companyâs distributable earnings per security growth guidance will be in the range of 3% to 3.75% from FY2018.

Vicinity Centres (ASX: VCX) is involved in the development and management of properties along with investments. It was officially listed on ASX in 2011. The company released its valuation for the six months ended 30th June 2019. The net valuation of the overall estimated portfolio witnessed a fall of 1.3%, as a consequence of declines in the pre-development centres and Western Australian portfolio. VCX reported a gain of 1.2% in the estimated net valuation of the flagship portfolio, which demonstrated the strength of premium destination assets under the VCX management.

The effect of a reduction in valuation on net tangible asset per security is projected to be 1.7% or 5 cents when compared to $2.96 reported at 31st December 2018. The reduction in valuation is forecasted to have 0.3% impact to gearing, which is predicted to be 27.2% as at 30th June 2019, reflecting an increase of 25.1% from 31st December 2018. With the strong growth in sales contributing to an expected increase of 1.6% in valuation, the Chadstone continues to build on its leadership position. The companyâs DFO centres are expected to record solid valuation growth driven by successful product remixing.