The real estate sector is a key contributor to in the advancement of Australia economy. Importantly, the rising residential property market has provided support to operators in the industry for the last several years. Let’s have a look at two REIT stocks CIP and GOZ and their recent operational and financial performance.

Centuria Industrial REIT (ASX: CIP) is a key real estate player with the investments in industrial properties within Australia. It was officially listed on ASX in 2012. On 28th June 2019, as a responsible entity of the Trust, Centuria Property Funds No.2 Limited announced the successful settlement of the fully underwritten institutional placement, which was announced on 27th June 2019 for $70 million capital raise via the issuance of around 23 million new CIP units at $3.05 per new unit issue price.

The settlement of the new units will occur on 2nd July 2019, and normal trading and allotment will take place on 3rd July 2019.

From the proceeds of placement, CIP will acquire three high quality industrial assets for a combined value of $59.3 million, with a further $10 million earmarked for capital expenditure to enhance the assets. In addition, Centuria Industrial REIT has also undertaken a non-underwritten unit purchase plan in order to raise up to $5 million. The company will invite eligible unitholders to subscribe for up to $15,000 in additional units, free of any brokerage or transaction costs, at the issue price of $3.05 (same as the placement) per unit in New Zealand and Australia. In the previous year, CIP raised $51.0 million in order to acquire industrial assets.

Investor Presentation Key Takeaways: Taking a closer look at capital management initiatives. CIP has agreed to refinance $160 million of its overall $520 million facility to two new three year and five-year tranches, increasing the tenor of that tranche by 2.7 years and has agreed to reset $110 million of existing interest rate swaps in order to capitalise on the low interest rate environment. Moreover, the company currently has no debt expiring until FY22. CIP has independently revalued nine of its current 42 properties as at 30th June 2019, which has resulted in a rise of 8.5% or $24.1 million against previous valuations and reflecting 32 basis points of capitalisation rate compression on those properties. The portfolio weighted average capitalisation rate firmed 8 basis points to 6.46%. Previously, in 1H FY19, the company reported strong growth in Assets Under Management.

Post acquisitions, the number of properties in the trust’s portfolio stood at 45 against 42 pre-acquisition properties.

Outlook: Going forward, to more closely align itself with the industry standards and PCA guidelines, the company will report on a funds from operations basis with its distribution policy, which is based on 90% to 100% of FFO. CIP anticipates distribution per unit of 18.4 cents and FFO per unit of 19.3 cents for FY19. FY20 FFO per unit growth is expected to be in the range of 2% to 3% over FY19 FFO.

Growthpoint Properties Australia (ASX: GOZ) owns and manages superior investment properties. It was officially listed on ASX in 2007. On 28th June 2019, the company has successfully concluded a fully underwritten placement to institutional and professional investors in order to raise around $150 million. In the placement, the company issued 37,783,376 new ordinary stapled securities at a price of $3.97 per stapled security. In addition, the issue price reflects a discount of 4.2% to the distribution-adjusted last closing price of the company’s stapled securities on 26th June 2019.

The settlement of the stapled securities under the placement will occur on 2nd July 2019, and the allotment will take place on 3rd July 2019.

The proceeds from the placement will well place the company to continue delivering on its strategy of fabricating well-located, well-leased acquisitions in the industrial and office sectors while maintaining a gearing at or below the lower end of its targeted range.

The company is also undertaking a non-underwritten security purchase plan in order to raise up to $15 million at an issue price of $3.97 per security. The company will be inviting the eligible securityholders with registered addresses in New Zealand and Australia to subscribe for up to $15,000 of new securities at the Placement price, free of any brokerage or transaction costs. Previously, the company secured long term debt financing of $161 million.

Investor Presentation Key Takeaways: In terms of capital management initiatives, GOZ has reset the interest rate swap book by cancelling current swaps with a total notional value of $475 million and entered in new swaps with a total notional value of $300 million, with a weighted average term to maturity of five years. Furthermore, the company also proposed cancellation of a $75 million debt facility. Looking at the property valuations for the month of June, 27 out of the company’s 57 properties, representing 46% of total portfolio value, have been independently valued as at 30th June 2019 and the balance will have Directors’ valuations applied. The draft valuations outlined a positive yield compression and rental growth throughout the portfolio, with growth in valuations on a “like-for-like” basis. In terms of current development projects, the construction of a new 19,300 sqm office building in Richmond, VIC is tracking ahead of schedule and expected to complete by Q1 FY20.

In terms of leasing expiries in FY20, ANZ has exercised its options and will enter a new six-year lease at its South Melbourne, VIC office, representing 13,744 sqm or 2.3% of the total portfolio income. 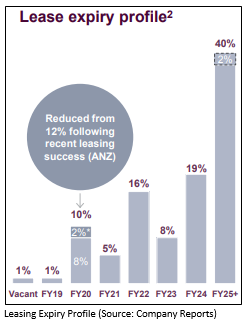 Outlook: The company continues to deliver on its successful business model with strategic acquisitions located in favoured office and logistics markets, which are anticipated to grow. Additionally, the company’s balance sheet primed to deliver its strategy with a low cost of capital, consisting of pro forma gearing of 31.6%, well below the targeted range of 35% to 45%. The company recently upgraded FY19 FFO per security guidance of at least 25.0 cents. For FY20, it expects funds from operations per security to be at least 25.4 cps and DPS of 23.8 cps. The company further expects increased liquidity in its securities, free float market capitalisation and S&P/ASX 200 Index weighting.