2 IT Stocks Up On ASX Ladder- PRZ, STG

With this achievement, the company has taken steps forward steps in fulfilling its vision of using SafeAir drone safety technology to unlock the full potential of the commercial drone industry.

Following the release of this news, the share price of the company increased by 3.191% during today’s trading session.

NPUASTS is one of seven Federal Aviation Administration (FAA) UAS test sites in the nation whose mission is to develop procedures for the integration of unmanned aircraft into the National Airspace System. Last month, the Federal Aviation Administration provided groundbreaking approval to Hensel Phelps, one of the largest general contractors and construction manager, to fly over people for UAS operator using ParaZero safety system.

ParaZero’s ASTM compliant SafeAir Mavic is designed specifically for DJI’s Mavic 2 series and it monitors UAS flight in real time, identifies critical failures, and autonomously triggers a parachute and moreover, it also contains a flight termination system and a warning buzzer to alert people below of the falling drone.

The third-party validation provided by NPUASTS played a crucial role in the ParaZero testing and it was a necessary step for the UAS industry in advancing operations of small UAS in various environments.

ParaZero has been working actively with the industry leaders to shape the future of drone safety.

In the first quarter of 2019, the company recorded cash receipts of US$282K, with a total operating outflow of US$1.26 million. At the end of the quarter, the company had cash of US$170K. Cash outflows in the June 2019 quarter is expected to be below March quarter at US$994K. On 12th April 2019, the company secured an additional $1.54 million (before costs) via a placement.

During the quarter, the company expanded its market reach in Europe by opening new markets in Hungary, Slovenia and Poland with its SafeAir Systems. During the March quarter, the Board was strengthened with the appointment of Chris Singleton, who has extensive corporate management and marketing experience in several sectors.

A technology company, Straker Translations Limited (ASX: STG) helps leading technology companies to streamline and scale the ability to communicate across regions via its world-leading AI data-driven language translation platform. The company uses its proprietary ‘RAY Translation Platform’ to deliver faster and more accurate translations. The company generates revenue by charging its customers by the word, but translators charge by the hour. As the efficiency of its platform increases, this advantage is reflected in improved economics.

Today, the share price of STG increased by 2.667% during the intraday trading session. The company was listed in October 2018, after completing an IPO, raising $20 million (gross proceeds) for growth initiatives.

For the year ended 31st March 2019, the company reported revenues from ordinary activities of NZ$24,594,000, up 44% on the previous corresponding period (pcp). During the year, the gross margin percentage was flat against the previous reporting period but on a constant currency basis, was up 0.4% to 55%, driven by the operating leverage gained through Straker’s world-class RAY Artificial Intelligence (AI) platform. 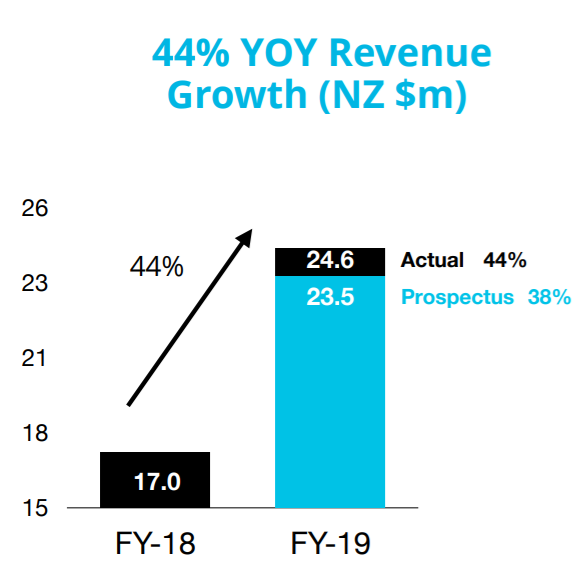 The company has more than 20 highly efficient technology personnel and currently, is looking to the grow tech team by 20% in FY20. The company operates in the translation industry, which facilitates trillions of dollars of global trade annually and is forecasted to reach $66 billion by 2022.

The focus of the company’s acquisition strategy is on Asia Pacific (specifically Japan and Australasia), USA, Spain, DACH region, Benelux and the UK. In all these regions (outside of Benelux), the company’s well-functioning business units make integration easier and faster. The total revenue of all the acquisition targets that the company has identified and validated is around $1.5 billion.

Going forward, the company will be using its data-driven approach to win new enterprise customers, especially around the need for translation data within AI engines.

Being a cloud-based platform, the company is having the ability to capture vast amounts of translated data sets and data on the quality and speed of the freelance translators, unlike many of its competitors, where the work undertaken by translators has not performed on a centralised platform.