In a noteworthy development, Australian Gold and base metals explorer, Musgrave Minerals Limited (ASX: MGV) raised 6 million via a strongly oversubscribed share placement. The funds raised are intended to be utilised for advancing the drilling at the new high-grade Starlight gold discovery at a part of Cue Gold Project exploration progress.

Notably, several high-grade gold discoveries in the reverse circulation drilling at the Starlight link-lode at Break of Day deposit has underpinned Musgrave’s exploration endeavours at the Cue Project.

Musgrave successfully raised $6 million capital via a placement of ~57.14 million new shares at an issue price of 10.5 cents per share. While the share placement to the corporate, institutional and sophisticated investors was oversubscribed, Musgrave welcomes several new institutional investors to register along with the existing shareholders.

Under ASX Listing Rule 7.1, the Company’s available placement capacity has been used for undertaking the placement. Musgrave expects the issuance of New Shares on or around 4 May 2020. Post the receipt of cleared funds, the shares would be issued.

Veritas Securities Limited and Canaccord Genuity (Australia) Limited acted as joint Bookrunners and Joint Lead Managers to the placement, who have assisted and advised in the placement.

Following the completion of the placement, the Company will have a cash balance of approximately $8.4 million.

The assays for the reverse circulation drilling have returned high-grade gold results at the Starlight link lode at Musgrave’s 100% owned Break of Day. Thirteen holes for 2,490 metres were drilled as the part of the RC drilling program. The composite assays for all have been reported.

The testing of the new high-grade link-lode primarily drove the drilling. Mineralisation over a strike length of more than 100 metres open to the west and down-dip has been intersected at the Starlight link-lode.

Moreover, the one-metre resampling of 6-metres composites has further confirmed the high-grade mineralisation at the deposit, enhancing the gold-prospects for the Western Australia based Company.

Notably, at the Break of Day’s Deposit, a southern extension of high-grade mineralisation to the Twilight lode was also recently identified during the March quarter. The significant intercepts include:

Break of Day- Follow-up RC drilling at Starlight is planned for May, following which the Company would provide resource update in Q3, 2020.

Lake Austin Region- On Lake Austin, the regional aircore geochemical drilling program is progressing well. Post the completion of the program and final assays receipt, the results will be reported. 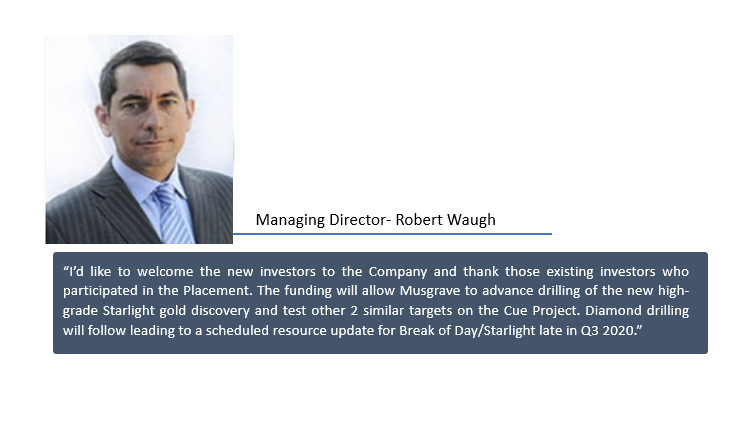