Musgrave has reportedly resumed the Reverse Circulation (RC) drilling at the newly discovered high-grade link lode at Break of Day which lies on Western Australia based Cue Gold Project.

The RC drilling is principally centric to drill testing the depth and strike extent. The RC campaign would comprise of approximately 20 holes for 4,000 metres.

Musgrave Minerals, following the completion of the ongoing RC Program, plans to commence the Diamond Drilling (DD) program which would further test Starlight mineralisation at depth.

Concerning the current Starlight exploration, Musgrave Managing Director Rob Waugh indicated that the company is quite active on the Cue Gold Project and would continue drilling for defining the extent of the Starlight lode demonstrating high-grade gold results.

He also highlighted that the RC drilling followed by the diamond drill program is expected to further pave the way for Cue Project resource update in Q3 2020. The company would be reporting the new drill assay results timely to the market.

A Glimpse at the High-Grade Starlight Link Lode

The new Starlight gold discovery lying at Break of Day has reportedly intersected high-grade gold, with all the recent intersections sitting outside the boundary of the current resource. The starlight mineralisation consists of various veins with high-grade gold dipping steeply to the southwest.

It is currently interpreted to lie within a zone which is at least 100 metres long and trends northwest southeast. The mineralisation at Starlight remains open to the northwest and both up, and down dip. 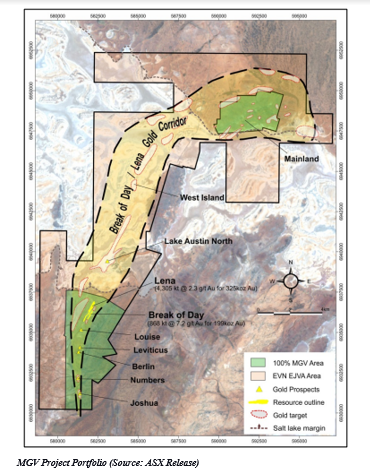 The company noted several high-grade gold results during the March 2020 quarter. Significant intercepts at Starlight include:

The exploration at the Cue Project is centric to Break of Day, Lena, Mainland and Lake Austin Region.

At the Starlight and Twilight lode at Break of Day, Musgrave has intersected high-grade mineralisation that sits outside the current resource boundary. Meanwhile, a significant mineral resource increase by 112% at Lena has increased the total resource at the Cue Project.

At the Mainland prospect area, following the RC drilling, a high-grade shoot of approximately 100 metres strike extent is defined. Besides, the regional air core drilling has commenced under the Evolution Joint Venture on Lake Austin.